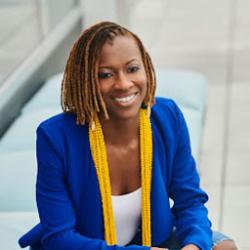 Tiffany has a Bachelor of Science in Economics from Central State University in Wilberforce, OH. She obtained her Master of Business Administration from Trinity University in Washington, DC. She came to NOAA after graduating from CSU in 2007. She began her career as an Administrative Assistant (Contractor) with the National Ocean Service, National Geodetic Survey, and was promoted to Project Analyst within two years. In 2016, Tiffany accepted a position in OAR as a Budget Analyst. After one year, she became a federal employee. After serving as a Budget Analyst, Tiffany accepted an invitation to join TPO as the Small Business Innovation Research (SBIR) Program Commercialization Specialist in OAR. Since the beginning of her career, Tiffany has participated on several diversity-related committees, developed D&I events and initiatives, and won several awards, including the Women of Color Technology Rising Star Award in 2021.

Tiffany is a firm believer that to be successful, you have to do more than what is expected of you. Doing enough is not enough. Thomas Jefferson said, "I find that the harder I work, the more luck I seem to have."