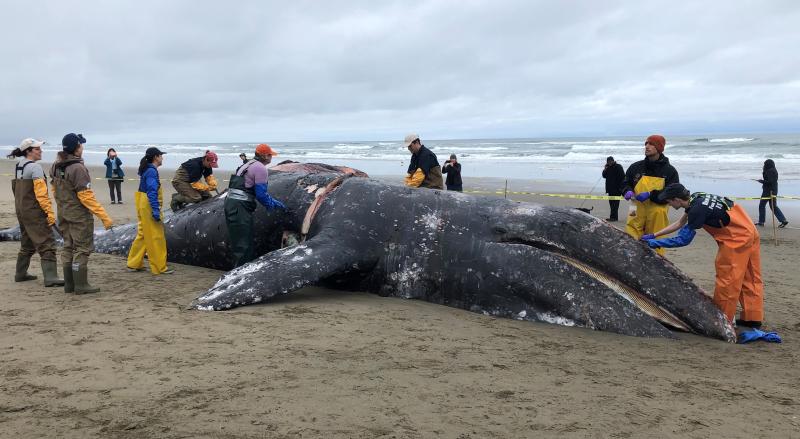 NOAA Fisheries has released the 2019 Report of Marine Mammal Strandings in the United States: National Overview, and five regional overviews. They are the third installment in a series of annual stranding reports compiled by the NOAA Fisheries’ Office of Protected Resources, Marine Mammal Health and Stranding Response Program.

The Alaska Ice Seal UME was formally declared in 2019, but included ice seal (bearded, ringed, and spotted seal) strandings that occurred in the Bering and Chukchi seas beginning in June 2018.

What Is a Stranding?

Marine mammals are important sentinels of ocean health and climate change, and responding to stranding events helps us monitor health and environmental trends that may impact humans. A marine mammal is considered stranded if it meets one of the following criteria:

Why Do Marine Mammals Strand?

Marine mammals strand for a variety of reasons. Results from examinations and necropsies (animal autopsies) show common causes of strandings include one or a combination of the following:

Some strandings may also be related to unusual weather or oceanographic events. Additionally, in many cases the cause(s) of stranding remains undetermined, especially when carcasses are found in advanced states of decomposition.

How to Report a Stranded Marine Mammal?

If you come across a stranded marine mammal, remain a safe and legal distance from the animal. Please report the animal to your regional 24/7 hotline. The most important information to collect is the date, location of stranding (including latitude and longitude), number of animals, whether the animal is alive or dead, and species, if known. Photos or videos (from a safe and legal distance) can also provide valuable information to Network responders. Only trained and permitted responders should approach or pick up a stranded marine mammal. You can also download the Dolphin and Whale 911 Stranding App in the Apple Store to help report a stranding.

Every marine mammal stranding event is unique and poses different challenges. Organized stranding response by highly trained and authorized personnel best serves the well-being of the stranded animals, and helps manage risks to public health and safety. The U.S. Marine Mammal Stranding Response Network is comprised of more than 120 organizations that provide first response capabilities for cetaceans and pinnipeds (except walrus) that are sick, injured, in distress, in peril, or dead. Live animals that are able to be rescued and rehabilitated provide valuable information on the biology, physiology, and health of those species. The lessons learned from relatively abundant species can greatly help conservation of threatened or endangered species. Data collected from live or dead stranded animals can also provide important information regarding human impacts on marine mammals such as interactions between marine mammals and fisheries, vessels, marine debris, or the effects of pollution (oil spills, contaminants, and heavy metals), and support law enforcement investigations. NOAA appreciates and supports the valuable work that members of the National Marine Mammal Stranding Network provide.

Last updated by Office of Protected Resources on January 07, 2023