Thanks to a combination of favorable weather and a well-run vessel, the 2021 Northeast spring ecosystem monitoring survey aboard NOAA Ship Gordon Gunter is complete. 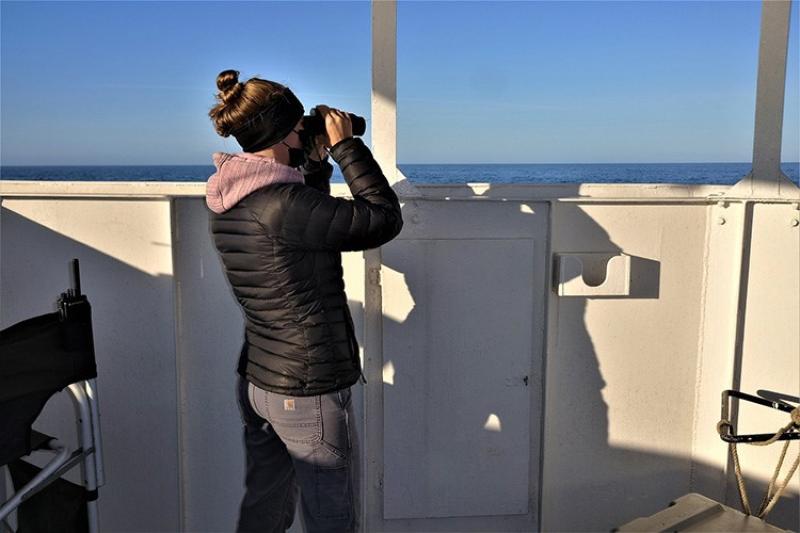 Scientists and crew aboard the NOAA Ship Gordon Gunter sampled at 106 stations. They achieved near-complete coverage of the survey area from Delaware through Southern New England.

Fewer days were available for the cruise than originally planned, so the scientific crew dropped all stations south of Delaware Bay to accommodate the time available. Coverage was also reduced on the Scotian Shelf, in the northern Gulf of Maine, and on Georges Bank, when a fast-moving storm front passed through, making sampling impossible. Instead, the team moved into the western Gulf of Maine to keep working, and collected more mackerel eggs and larvae.

Together, the core measurements conducted by our ecosystem monitoring (EcoMon) cruises help researchers understand and predict changes in the Northeast shelf ecosystem and its fisheries. Researchers are scheduled to sail on the next EcoMon survey in August aboard NOAA Ship Pisces. 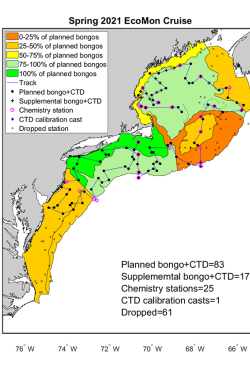 Core EcoMon sampling includes “bongo” net tows to collect zooplankton, larval fish and fish eggs. These fine-mesh nets are attached to side-by-side steel rings, resembling bongo drums when deployed. During this survey, bongo net tows were conducted at 100 different stations. Samples from this survey will be used to update an index of Atlantic mackerel egg abundance, which is used in the stock assessment. To further support this effort, supplemental stations were added in the western Gulf of Maine.

Seawater conducts electricity. This “conductivity” varies by depth and other oceanographic factors and is used to estimate the salinity of seawater. The crew deployed an instrument that can measure conductivity, temperature, and depth at all 106 stations on this survey. The combination of temperature and salinity at various depths helps define marine habitat boundaries, track ocean circulation, and monitor changes in climate. This can help explain changes in marine species distribution and productivity.

To monitor marine carbon cycling and ocean acidification, scientists collected water samples and measured dissolved inorganic carbon, total alkalinity, pH, and nutrients at 25 stations. Increases in dissolved carbon dioxide can increase acidity of the water, which can in turn affect shellfish and other sensitive organisms. Pteropods, a planktonic shelled mollusk, were collected from the water column. The condition of the pteropod shells will be examined to measure the biological effects of ocean acidification. This is the first EcoMon cruise where pteropods were studied in this way. The NOAA Ocean Acidification Program funded this work, and it is conducted in partnership with NOAA’s Atlantic Oceanographic and Meteorological Laboratory in Miami. The pteropod measurements are conducted in partnership with the Bermuda Institute of Ocean Science, where the measurement technique was developed by Dr. Amy Maas.

We regularly conduct outreach with K-12 schools, including hosting teachers on surveys through NOAA’s Teacher at Sea Program. While pandemic restrictions prevented teachers from participating in this spring’s EcoMon survey, we did have a project with a program alumna. Scientists conducted an experiment demonstrating the effects of water pressure on compressible materials using styrofoam cups provided by students from the Banner Academy in Arizona. Cruise chief scientist Jerry Prezioso also answered questions submitted by the students while underway.