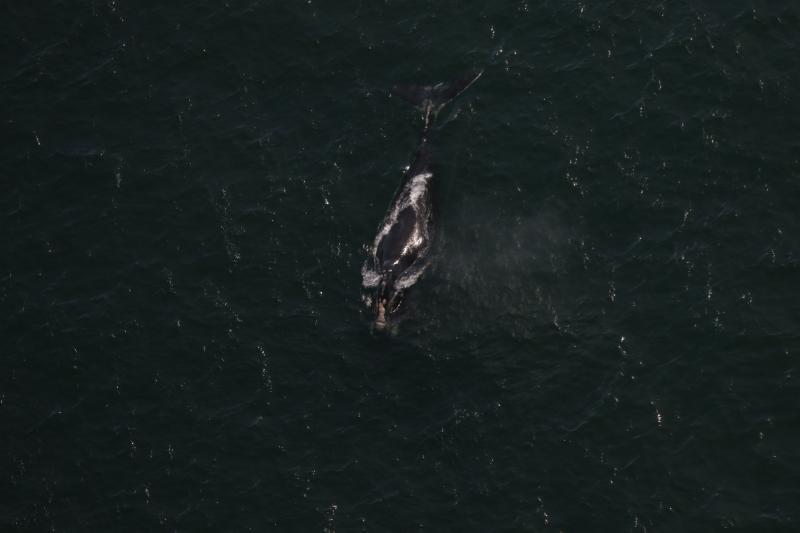 Today, officials confirmed that North Atlantic right whale #3920, also known as “Cottontail,” was found dead yesterday 15 miles off the coast of Myrtle Beach, South Carolina. Due to the animal’s poor body condition and offshore location, teams mobilized early today to find the whale by boat. They collected biological samples, placed a tag on the whale to continue to track its location, and removed ropes entangling the animal. This animal was spotted alive by aerial survey teams off Florida’s Treasure Coast a little over a week ago.

This death changes the North Atlantic right whale Unusual Mortality Event count from 33 dead and 15 seriously injured cases to 34 dead and 14 seriously injured. “Cottontail” was one of the previously documented serious injury cases and is now one of the mortalities. The total for the UME remains at 48 known individuals.

NOAA Fisheries mobilized a team of large whale disentanglement experts, in coordination with partners from the Florida Fish and Wildlife Conservation Commission, Blue World Research Institute, Marine Resource Council and Harbor Branch Oceanographic Institute. They wanted to better assess the current state of an entangled North Atlantic right whale swimming off the Treasure Coast of Florida. The whale was positively identified as #3920, an 11-year-old male, also known as "Cottontail." He was previously seen entangled in October 2020 off the coast of Nantucket. The team successfully attached a telemetry buoy to the ropes entangling Cottontail. Telemetry buoys allow us to track the animal’s movements via satellite and inform potential future disentanglement efforts. Cottontail’s body condition appears to have worsened since he was last seen in October.

An Unusual Mortality Event has been ongoing for North Atlantic right whales since 2017. To date, 48 right whales have been documented in the UME (33 dead in U.S. or Canadian waters and an additional 15 live seriously injured individuals). These 48 whales include the dead calf that stranded last Saturday, its injured mother "Infinity," and "Cottontail." The primary causes of the Unusual Mortality Event are entanglements or vessel strikes. North Atlantic right whales are an endangered species with fewer than 400 individuals estimated remaining. The 48 whales documented so far in the UME represent more than 10 percent of the population and is a significant setback to the species’ recovery.

The New England Aquarium has identified this entangled whale as #3920, an 11-year-old male, also known as "Cottontail." There is a line over its head, exiting both sides of his mouth, extending beyond his tail for about three to four body lengths. CCS removed some gear from the whale and added a satellite buoy for tracking. Cottontail was last seen in March south of Nantucket.

Due to fog and rough seas, no operations are planned today. When we have more details, we will provide an update.

You Can Help Right Whales

Mariners: Please note that there is a Right Whale Slow Zone south of Nantucket to protect right whales recently sighted in this area.

If you see a marine animal in distress from Maine to Virginia, call (866) 755-6622. If you are outside this area, call the appropriate contact number for your location. As always, keep people and pets back a safe distance of at least 150 feet from marine animals. Keep boats and drones 500 yards away from endangered North Atlantic right whales. To find out how you can help, please contact your local stranding network partner.