Advances in Monk Seal Rescues: An Early Notification from a Fisherman Saved a Life

A fisherman provided information to NOAA Fisheries that was vital to finding a hooked Hawaiian monk seal and planning the hook removal. 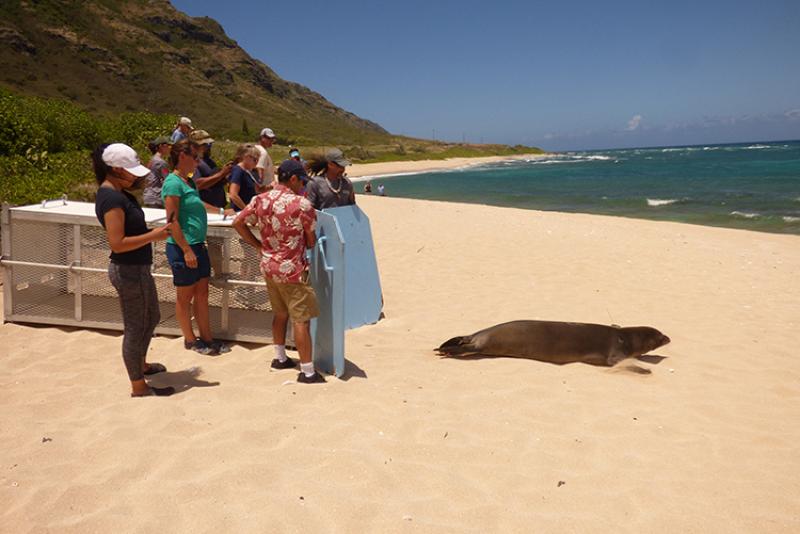 Early on Saturday, July 27th, the Hawaii Marine Animal Rescue received a call about a hooked monk seal. A fisherman was reeling in his line when he realized there was an endangered Hawaiian monk seal at the end of it. After cutting the seal loose, he called the Hawaiian monk seal response line (1-888-256-9840). He gave critical, life-saving information to the response team.

The fisherman provided information that allowed the team to find the seal on Saturday afternoon. He told them about the set hook, trailing fishing line, gear identification, and seal’s natural markings. These were all the same as the seal R333. Usually found between Niʻihau and Kauaʻi, R333 was recently spotted on Oʻahu. Just as the response team arrived to remove the hook, he slipped away into the water in romantic pursuit of a female seal. On Sunday morning, he was seen again. This time, we successfully and safely captured him and brought to NOAA’s Inouye Regional Center in Honolulu for further evaluation. 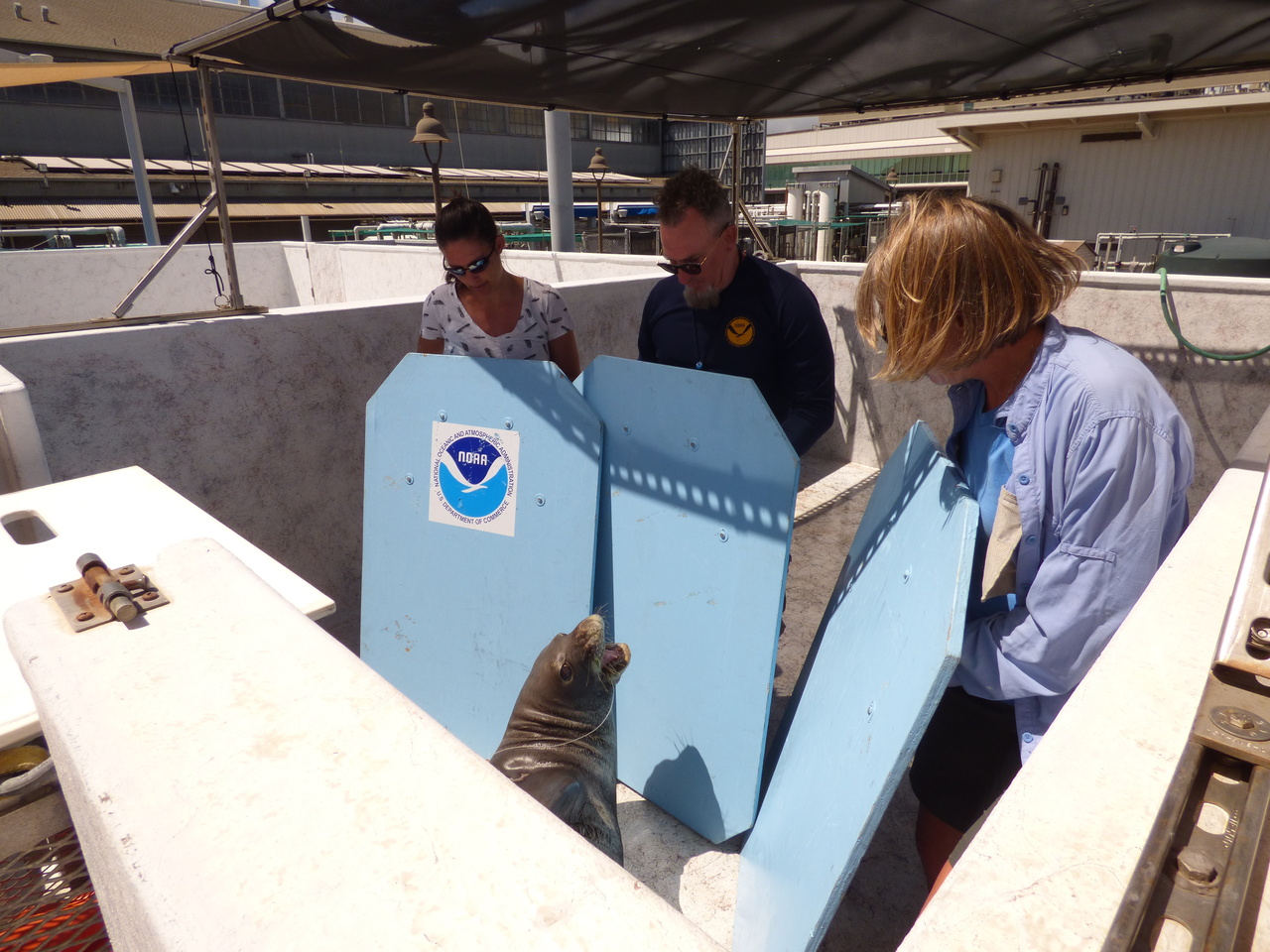 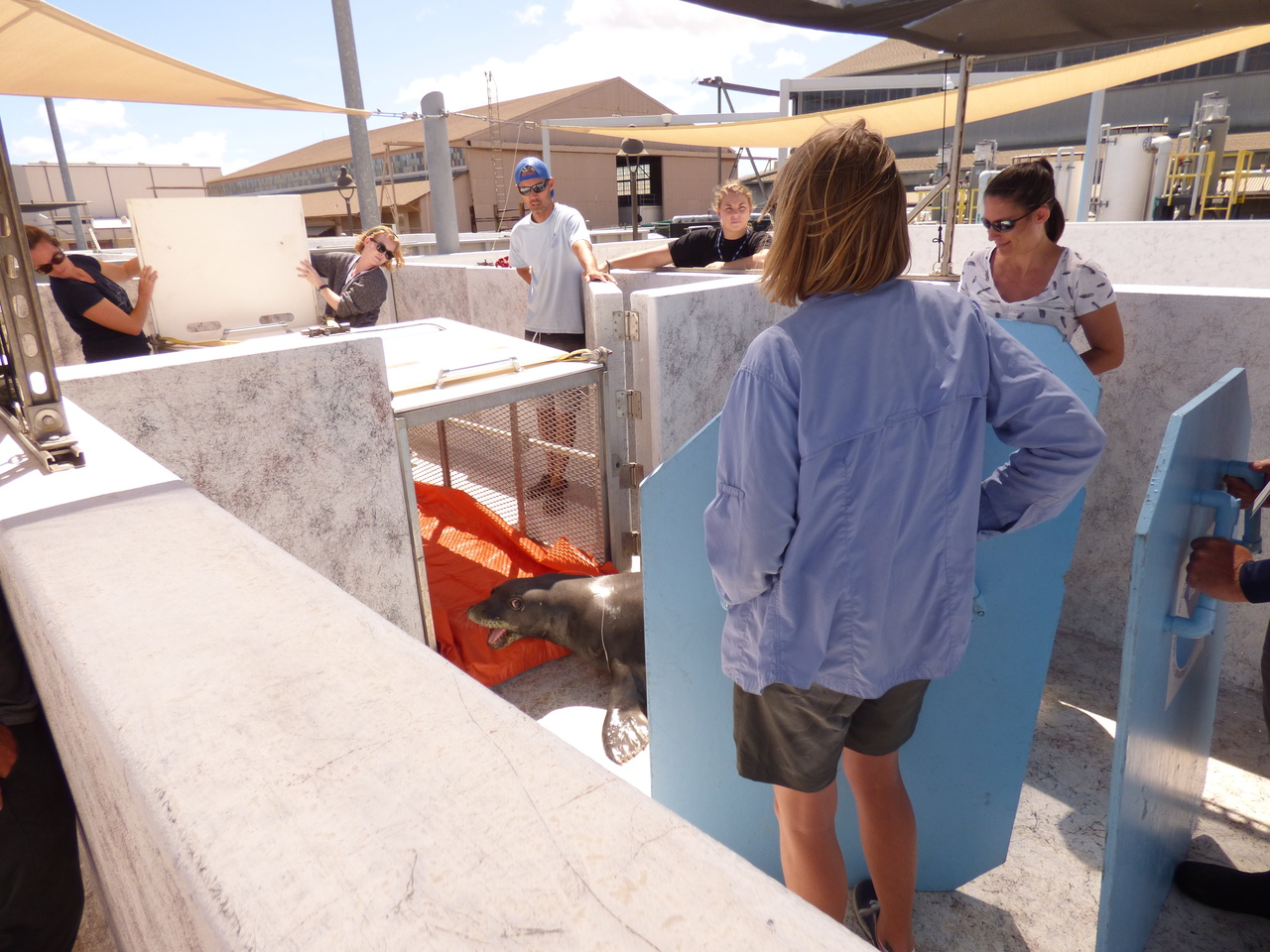 The monk seal response team transfers R333 to a holding pen for evaluation at NOAA’s Inouye Regional Center. Fishing line is trailing out of his mouth.

The NOAA team evaluated the seal to locate the hook and determine ways to remove it. An X-ray showed the hook lodged deep in the esophagus, just before the opening to the stomach. In the past, a hook that deep would usually require surgery, but surgery is invasive and recovery is long. It was the vet team’s least desirable option. 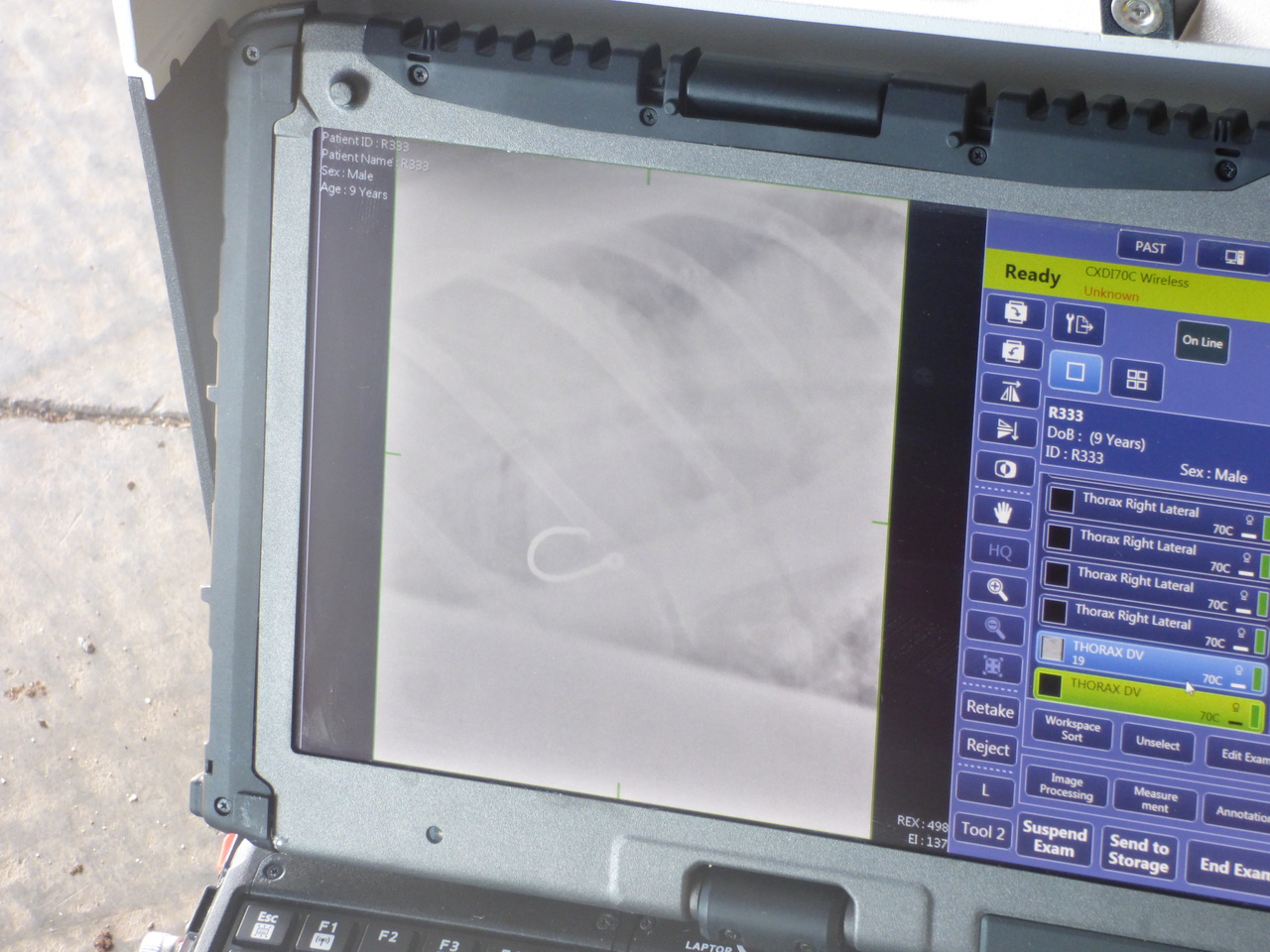 X-ray of the fishing hook lodged deep in R333’s esophagus.

Led by Dr. Michelle Barbieri, the team wanted all options on the table. This included modifying a de-hooking tool that had been used on animals with hooks lodged higher in the esophagus. Because of the hook’s depth, and R333’s size, they decided to try making the tool longer. They had to take it to a welder, who quickly figured out how to add 16 inches to the de-hooking tool. This would be their best chance at a less invasive procedure.

On Wednesday, the experts anesthetized R333 and assembled around the equipment. Dr. Gregg Levine used an endoscope to view the hook. The team wanted to try the extended de-hooking tool first before any surgical options. With tempered expectations, Dr. Barbieri gingerly slid the de-hooking tool along the length of the fishing line, turning and prodding where the hook was lodged. It took about 45 minutes, but she was able to free the hook from the valve between the esophagus and the stomach, called the cardiac sphincter. 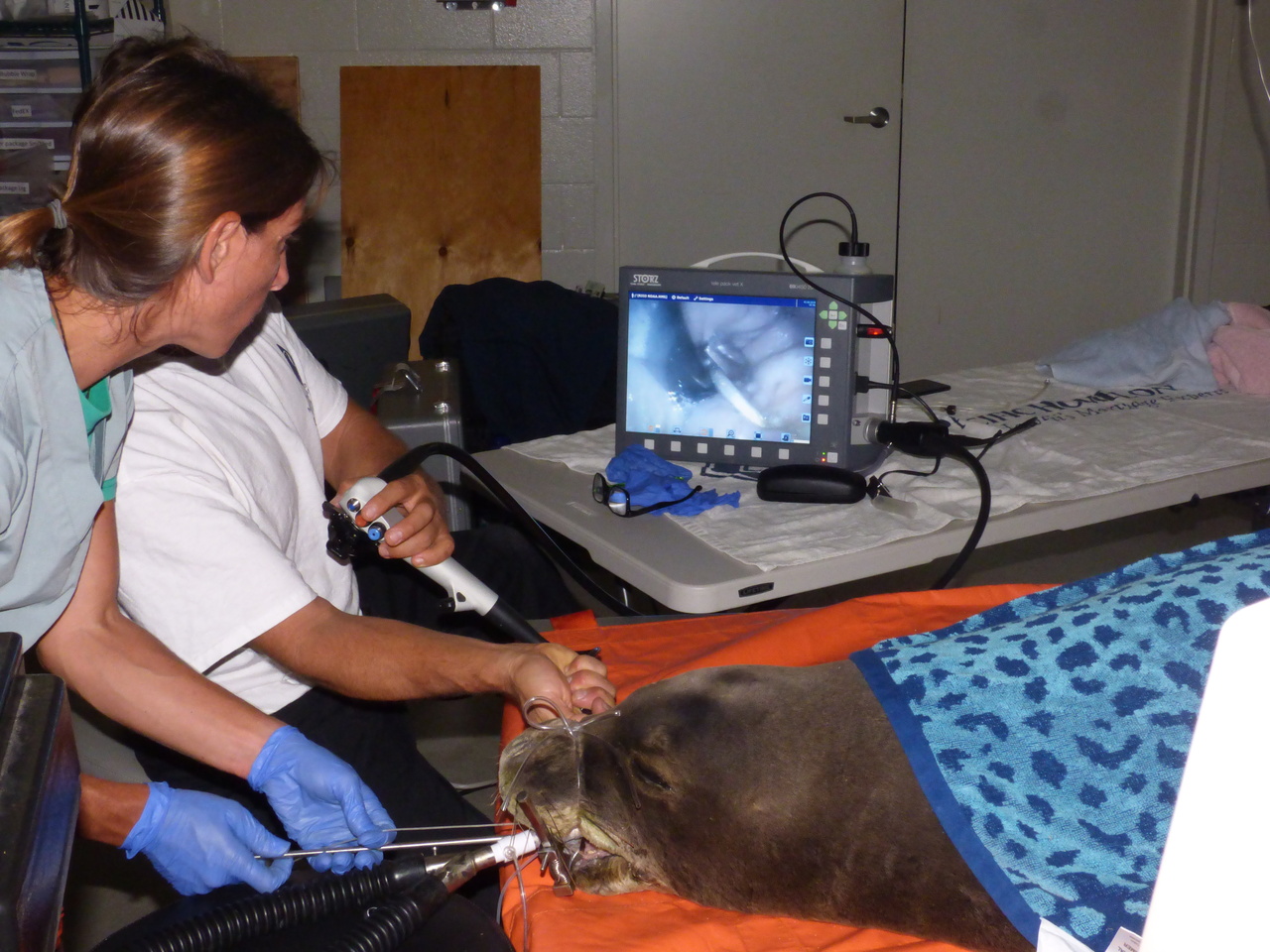 The veterinary team uses an endoscope to see the hook while dislodging it from the monk seal’s cardiac sphincter.

The team wasn’t out of the woods yet—the hook was still inside the seal. They worried about the damage it had caused. They used the endoscope again, this time to evaluate the tissue punctured by the hook. It was surprisingly minimal. The resulting wound would probably heal on its own. They still needed to pull the hook out, through the cardiac sphincter and along the entire length of the esophagus, without snagging the seal’s internal tissues. They skillfully slid a piece of flexible PVC tubing over the tool and used it to cushion the point of the hook. It was removed without any snagging. 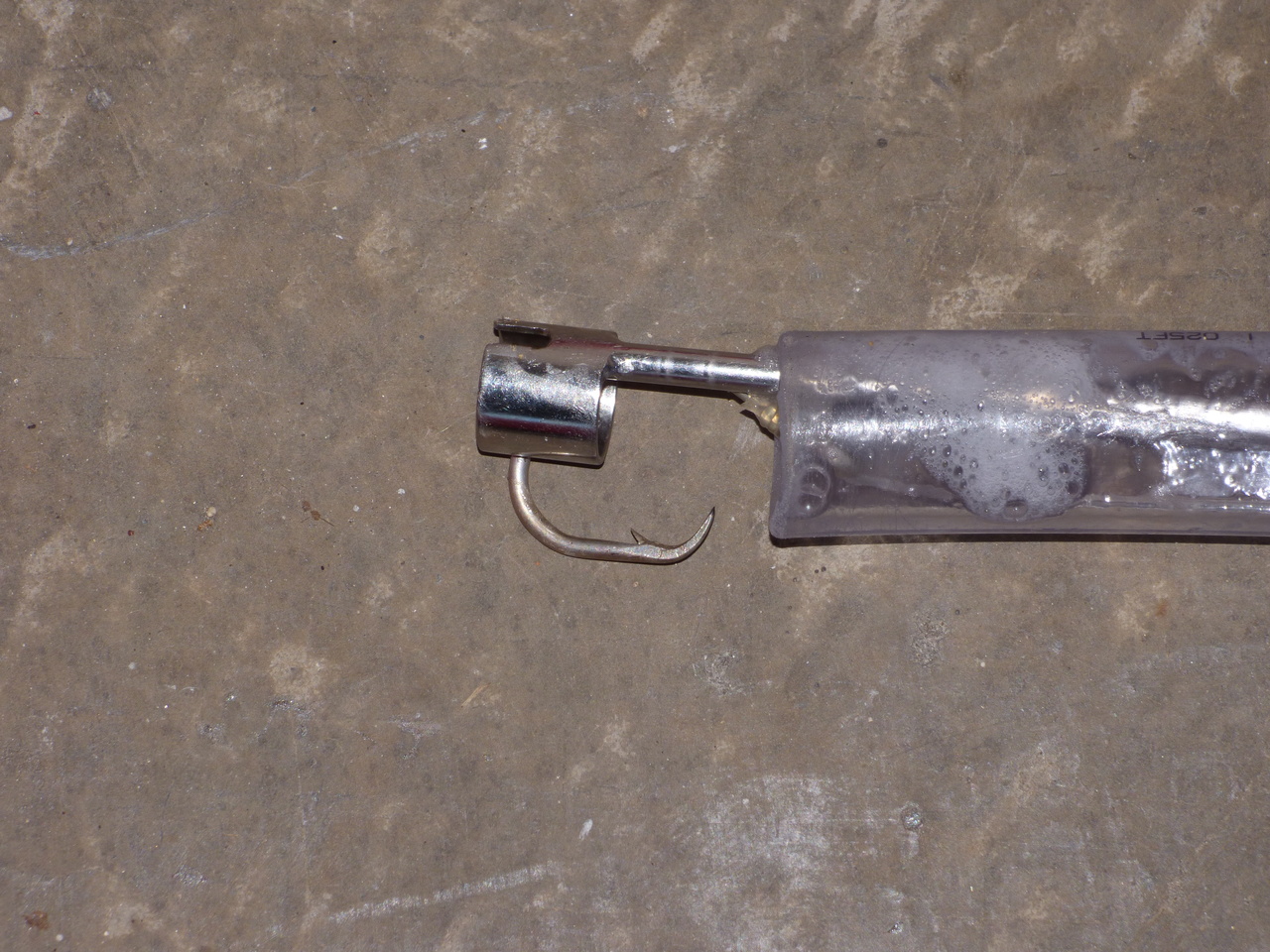 Dr. Michelle Barbieri used PVC tubing to cover the tip of a hook and 16-inch de-hooking tool so it would not cause more damage as she maneuvered it out of R333’s esophagus.

The vet team breathed a large, collective sigh of relief. They gave R333 antibiotics and fluids, and he recovered from anesthesia without complication. The team released him by noon on Thursday, outfitted with a satellite tag, microchip, and flipper tags. Good luck, R333! We hope you find romance. 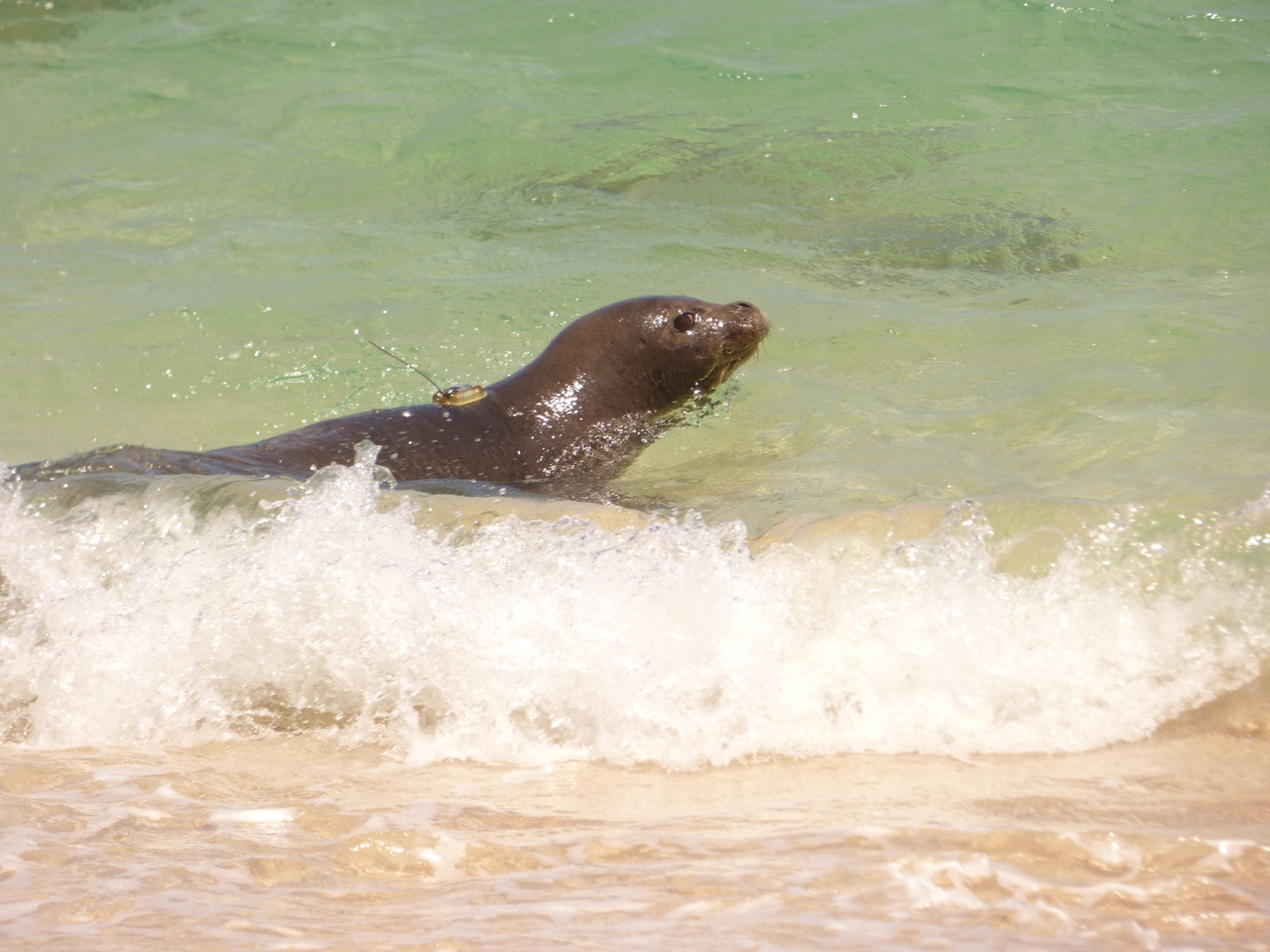 After a hook was removed from his esophagus, Hawaiian monk seal R333 swims along the shore with a satellite transmitter attached to his back.

Seal's behavior—including interactions with people and other animals.