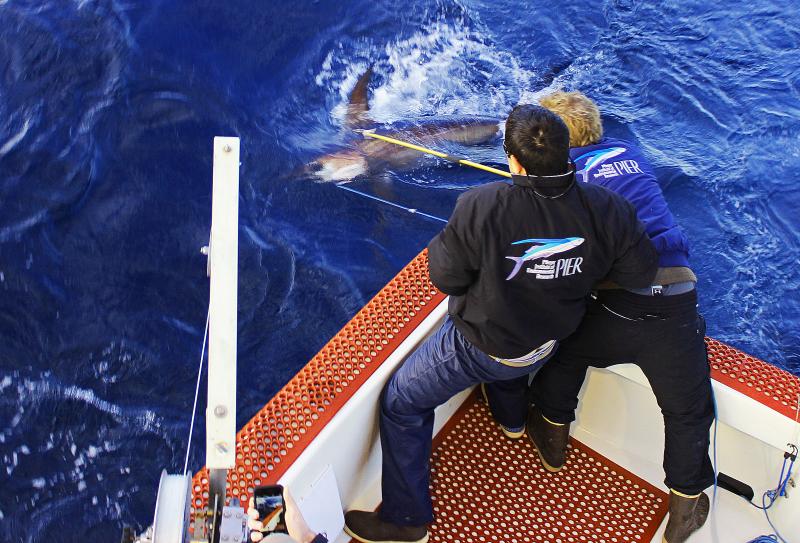 Tagging of swordfish off Southern California funded by NOAA Fisheries found that they spend daytime hours an average of almost 900 feet below the surface, where few other fish species venture. Deep-set buoy gear rapidly sinks bait to those depths where it catches swordfish and little else. Credit: Pfleger Institute of Environmental Research

NOAA Fisheries is proposing to approve a new means of catching West Coast swordfish that could increase the domestic supply of the species often featured in upscale restaurants.

The fishery is based on their unique behavior. Swordfish are one of the few fish that spends long periods at great depths in the ocean. Increased swordfish landings would also help offset imports that now make up about 84 percent of the swordfish supply on the West Coast. They are often imported from countries with less protection for sea turtles and marine mammals.

NOAA Fisheries is evaluating the proposal to authorize fishing for swordfish in federal waters using deep-set buoy gear. This gear lowers baited hooks hundreds of feet beneath the surface, where they catch swordfish and little else. The selective gear poses little risk to protected species such as whales and sea turtles, which are not usually found at such depths.

The West Coast swordfish fishery has long relied on drift gillnets that, in their earlier years, entangled protected species. The drift gillnet fleet has since dramatically reduced its impact on marine mammals and turtles to meet strict U.S. environmental standards. However, restrictions on where and when they can fish has reduced the drift gillnet fishery from more than 100 vessels to fewer than 20 participating vessels.

The only other fleet targeting swordfish in federal waters off the West Coast catches the fish with harpoons, but contributes only a small portion of swordfish landings. Most of the U.S. swordfish landed on the West Coast doesn’t come from West Coast-based vessels. It comes from Hawaii-based longline vessels, which trail baited lines behind them.

West Coast vessels are not authorized to use shallow-set longlines, the type of longline designed to catch swordfish.

Reduced landings combined with high demand has created an imbalance: from 2015 to 2020, 84 percent of swordfish supply on the West Coast of the United States came from foreign imports. Often, they come from countries with fewer protections for sensitive species.

Swordfish fishing off the West Coast concentrates in the fall and early winter, supplying a high-value market including upscale restaurants and seafood counters. Commercial swordfish landings peaked in the 1980s at more than 7 million pounds worth close to $13 million annually, according to NOAA Fisheries statistics. Since then landings have declined to less than 1 million pounds of swordfish worth about $2.5 million in 2019, the last year with complete statistics available.

“We want options for the fleet to fish for our healthy West Coast swordfish stock at a time when most of the swordfish we can buy in the store comes from abroad,” said Ryan Wulff, Assistant Regional Administrator for Sustainable Fisheries in NOAA Fisheries West Coast Region. “We all benefit from greater domestic production, because we know the fish is caught safely and sustainably, consumers get more choices, and our local communities benefit.”

In 2015, at the recommendation of the Pacific Fishery Management Council, NOAA Fisheries began issuing experimental permits for deep-set buoy gear to test the method of fishing for swordfish off the West Coast. The trial years showed that the new gear type may be productive for West Coast fishermen, and safe for protected marine species.

NOAA Fisheries is now weighing whether to permanently authorize deep-set buoy gear. It would be the first new commercial gear type introduced since the 2004 adoption of the West Coast Fisheries Management Plan for highly migratory species such as swordfish.

The proposal was recommended by the Pacific Fishery Management Council and assessed by NOAA Fisheries. A limited-entry fishery in the Southern California Bight would issue up to 300 permits, phased in over a 12-year period. Deep-set buoy gear would also be allowed in federal waters off Northern California and Oregon for fishermen authorized to catch highly migratory species. The gear would not be authorized off Washington, as recommended by the Pacific Fishery Management Council.

NOAA Fisheries funded tagging studies by the Pfleger Institute of Environmental Research to learn more about swordfish, and research on gear to take advantage of what the tagging showed. Deep-set buoy gear employs heavy, four-kilogram weights to quickly sink baited hooks to 800 to 1,200 feet, where water is very cold and low in oxygen. The tagging showed that swordfish are one of the few species that can withstand those conditions very long.

“Swordfish have evolved the capacity to feed at great depth during the day, tolerating harsh environmental conditions for prolonged periods,” said Chugey Sepulveda, research director at PIER, who led much of the tagging and gear development research. “While they are at depth, they are only accompanied by a few other species, which provides a good opportunity for selective targeting.”

“Deep-set buoy gear complements harpoon and drift gillnet as all three gear types are most effective at different times of the year. The suite of gear types improves access to swordfish across the fishery season,” he said.

NOAA Fisheries projects that the gear could catch between 3,752 and 5,400 swordfish each year once all the available permits are issued. That would be well within the capacity of the Western and Central North Pacific Ocean swordfish stock, the source of swordfish caught off the West Coast, according to stock estimates.

Swordfish prices can vary widely. Some fishermen have questioned whether they can catch enough swordfish with deep-set buoy gear for the method to be profitable in the long term. Prices, catch amounts, and the extent to which commercial fishing vessels use the new gear will determine its economic success, according to NOAA Fisheries’ evaluation.

The draft environmental impact statement considers the likely catch of different species of fish. It also evaluates economic impacts for the region’s fishing economy, the fishing industry, and consumers. Deep-set buoy gear is so selective that swordfish comprise upwards of 95 percent of the fish caught with the gear. That can include a small number of bigeye thresher sharks, which fishermen generally release back in the ocean alive.