Australia’s Box Jellyfish: An Unexpected Key to Unlocking the Mystery of Stinging Water

Sometimes a summer internship opens the door to a new career. In this case it helped uncover a clue to an age-old mystery—the cause of “stinging water.” 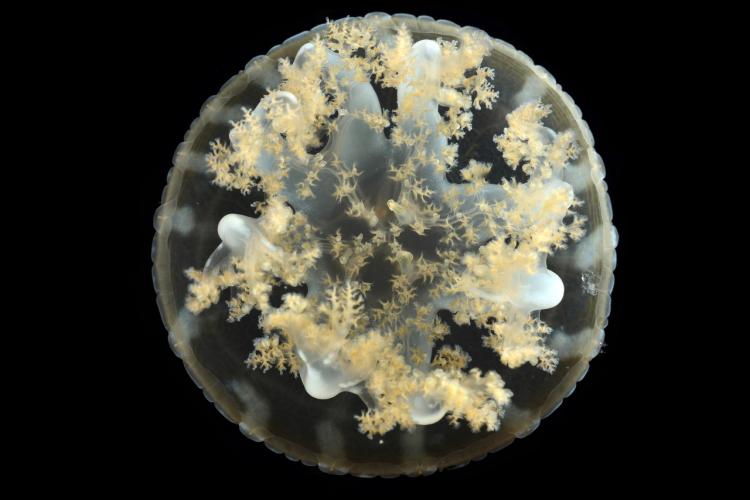 Stinging water is a phenomenon sometimes experienced by divers and snorkelers. They may experience an itchy, stinging sensation while swimming near upside-down jellyfish without ever actually touching the jellyfish itself. Though long-known, the precise cause of stinging water had never been identified—until now, with the help of Anna Klompen, a former NOAA undergraduate Hollings Scholar. 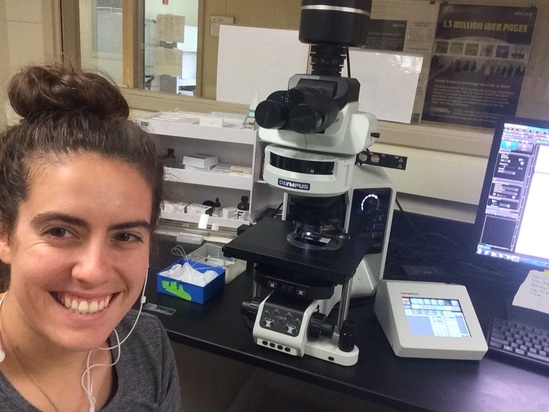 Anna was a NOAA Hollings Scholar in 2015. She conducted her undergraduate summer internship at the NOAA National Systematics Laboratory in Washington, D.C. Having been interested in jellyfish since middle school, she set out to work under the mentorship of NOAA scientist and jellyfish researcher Dr. Allen Collins. 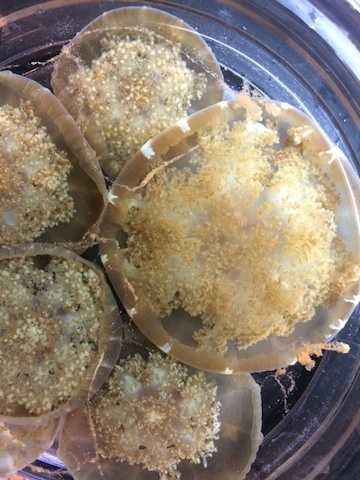 Upside-down jellyfish in a bowl for testing.

To conduct this research, Anna had to use gene expression data as difficulties arise with just looking at the venom protein itself. But it was making these genetic characterizations that would ultimately help lead to a discovery on the stinging water phenomenon.

A fellow researcher, Dr. Cheryl Ames from the Smithsonian, along with two high school interns, were also looking into the cause of stinging water. Four years later the project came full circle when Cheryl contacted Anna, now a PhD student at the University of Kansas studying jellyfish venom. Cheryl asked her to come back and help them figure out what these “weird stinging cell structures” in the upside-down jellyfish mucus were.

Peering through the microscope, Anna saw these obscure stinging cell structures floating in mucus. They looked like popcorn balls filled with jelly and were covered with stinging cells. She spent a lot of time figuring out where these stinging structures were coming from. "It’s a beautiful story of something they knew made stinging water and stinging mucus. Other biologists who worked on this animal knew about this thing but we didn’t know exactly what was causing this stinging water." 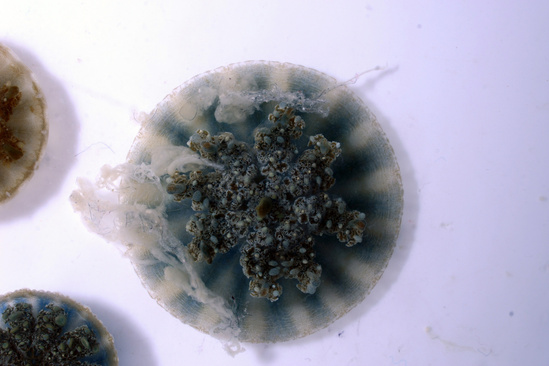 Previous publications had made note of stinging structures in the mucus. In more than a century no one had been able to identify what they were. Possibilities ranged from a broken jellyfish tentacle to something living in the jellyfish.

The new study, released in February, shows the source of this stinging water is small stinging capsules released in a mucus-like substance from the upside-down jellyfish. More simply put, it’s “stinging snot.”

“A lot of this paper is what people consider basic natural history work where you are just trying to find out what something looks like, how it works, how it is distributed. People think we have all this stuff figured out and we really don’t. But it’s still just basic natural history work. What is in the world around us and how does it work. And there is still so much of that that needs to be done,” says Abby Reft, a Museum Specialist and stinging cell expert with the NOAA National Systematics Laboratory and co-author on the paper.

A fitting message which shows how much more there is still to learn about marine life and what a difference an undergraduate internship can make.

Last updated by Office of Science and Technology on April 17, 2020