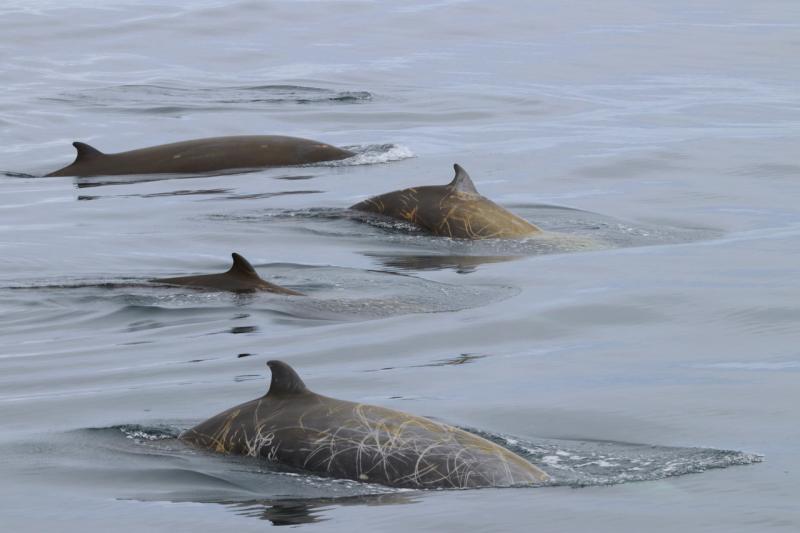 In a new study, a team of NOAA and academic scientists examined eight stranding events of Cuvier’s beaked whales in the Mariana Archipelago since 2007. They found that three of these strandings occurred either during or within 6 days after naval anti-submarine sonar operations. The study also found that multiple species of beaked whales occur in the Mariana Archipelago throughout the year, similar to other island-associated populations around the world. The study was published in the Proceedings of the Royal Society B: Biological Sciences.

Beaked whales are the world record holders for deepest and longest dives among marine mammals: 9,816 feet and 137.5 minutes, respectively. Given their long dives and preference for deep water habitats, we rarely see beaked whales at the surface. As a result, researchers have not yet been able to estimate the population size of Cuvier's beaked whales in the Mariana Archipelago. In similar island habitats like Hawaiʻi and the Canary Islands, beaked whales live in small populations of fewer than 100 individuals. They are often permanent residents.

Throughout their range in the Northern Hemisphere, beaked whales are known to be particularly sensitive to mid-frequency active sonar. This type of sonar is used by navies to detect and locate ultra-quiet submarines. Since it was introduced in the 1960s, people have documented 12 mass strandings of marine mammals that were associated with sonar activities. These occurred in the Bahamas, Canary Islands, Greece, and Italy. Dozens of strandings have occurred in the vicinity of naval activities in other locations, but lack evidence of direct association with mid-frequency active sonar.

Beaked whales may change their normal diving behavior by surfacing too quickly when they encounter navy sonar. This behavior may cause bubbles in their blood, joints, and vital organs, similar to decompression sickness (“the bends”). Scuba divers sometimes suffer the bends when they experience rapid changes in pressure. This may make whales vulnerable to stranding when exposed to naval sonar activities. However, scientists still don’t understand the exact relationship between beaked whales and sonar.

To investigate the cause of death in sonar-associated strandings, they need to be reported quickly. Skilled technicians need to be available to promptly examine carcasses before they begin to decompose. In remote places such as Guam and Saipan, this is often difficult.

Since 2010, NOAA’s Pacific Islands Fisheries Science Center has been collecting acoustic recordings at two deep-water sites in the Northern Mariana Islands. The long-term acoustic record captures the sounds of whales and dolphins, allowing us to document the presence of these species. It also records sounds from human activities such as shipping traffic and military sonar. 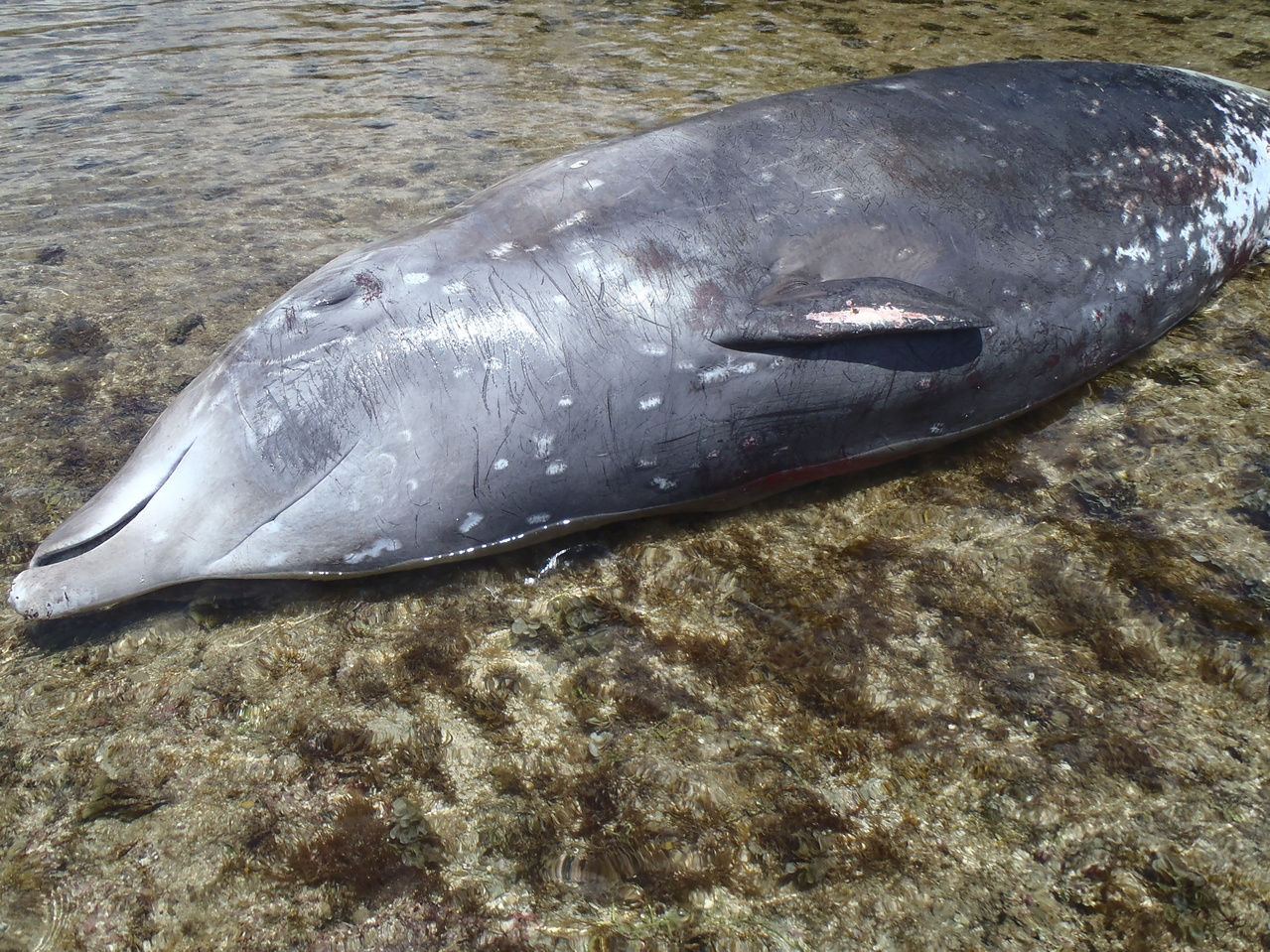 Following a rare stranding of two beaked whales on Saipan in 2011, researchers examined the acoustic records for naval sonar activities. Both recorders detected sonar for more than 10 hours the day before the first beaked whale stranded. Between 2010 and 2014, both recorders detected sonar on 35 days, with the sonar events lasting from 1 to 18 days. Since acoustic monitoring was not continuous throughout that time, there may have been other sonar events that the recordings did not capture.

They also compared the public record of sonar operations on the Marianas Island Range Complex with the beaked whale strandings on Guam and Saipan.

This research identified the Mariana Archipelago as a location where sonar-associated strandings of beaked whales occur. The paper reported that there were eight stranding events of beaked whales between August 2007 and January 2019. One to three whales were involved in each event. Three of these stranding events occurred during or within 6 days following anti-submarine training activities. The likelihood that the strandings were coincidental is less than 1 percent. This suggests that there is a highly significant correlation between sonar and beaked whale strandings on Guam and Saipan.  Although one additional stranding, in January 2019, is associated with a known training event, the U.S. Navy has confirmed that sonar was not used until after the stranding date. NOAA Fisheries worked closely with the U.S. Navy to confirm the publicly available details of other Navy training, testing, and operational sonar use. NOAA and the U.S. Navy continue to work together to ensure that complete and accurate data are available for scientific research.

The acoustic recorders detected mid-frequency active sonar on about 2 percent of days (35 out of 1,602) between 2010 and 2014. The rarity of sonar in the Mariana Archipelago might make it more dangerous to beaked whales. Other researchers have found that in a pristine acoustic environment, beaked whales show a strong avoidance response to both near and distant sonar. But on naval training ranges with frequent sonar use, the sonar source, received sound level, and behavioral context may affect individual responses.

For many species of animals, including humans, occasional and unpredictable noise is often perceived as a threat. Animals may learn to adjust their reactions after repeated exposure to new sounds. In the Mariana Archipelago, the infrequent use of sonar in conjunction with quiet ambient noise levels may increase the severity in the behavioral responses of beaked whales. The response may be different for populations living with higher ambient noise levels or those that have become habituated to frequent sonar activity.

This study highlights the value of passive acoustic monitoring for visually cryptic beaked whales as well as naval sonar activity. This is particularly valuable in remote regions with few opportunities for visual surveys or established stranding networks beyond Guam and Saipan.

This study was conducted by researchers from NOAA’s Pacific Islands and Southwest Fisheries Science Centers, and Scripps Institution of Oceanography at the University of California San Diego. Brent Tibbatts and the Guam Department of Agriculture, Division of Aquatic and Wildlife Resources also provided information on stranding records. 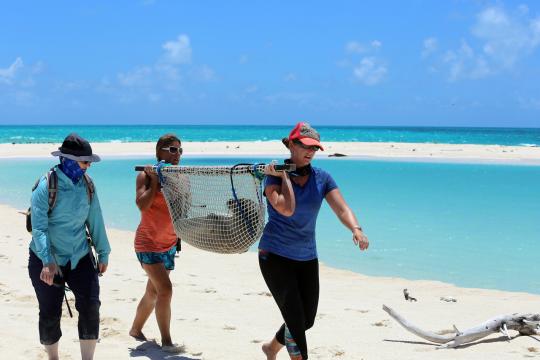