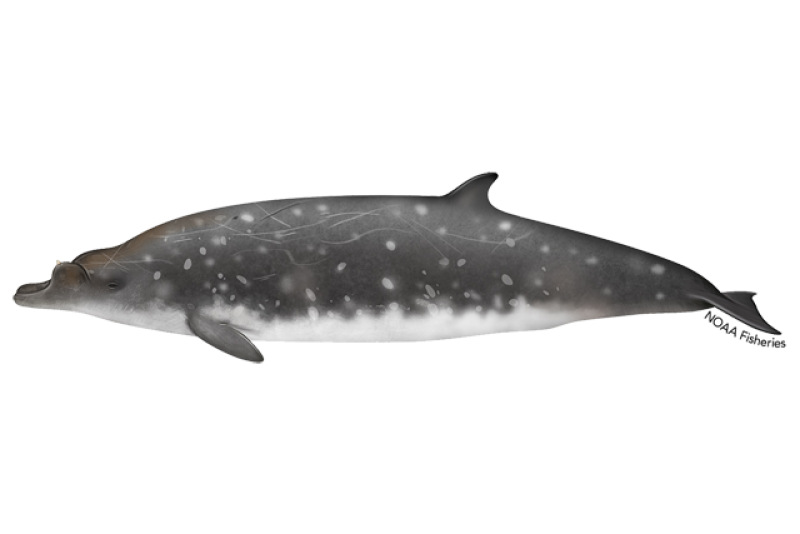 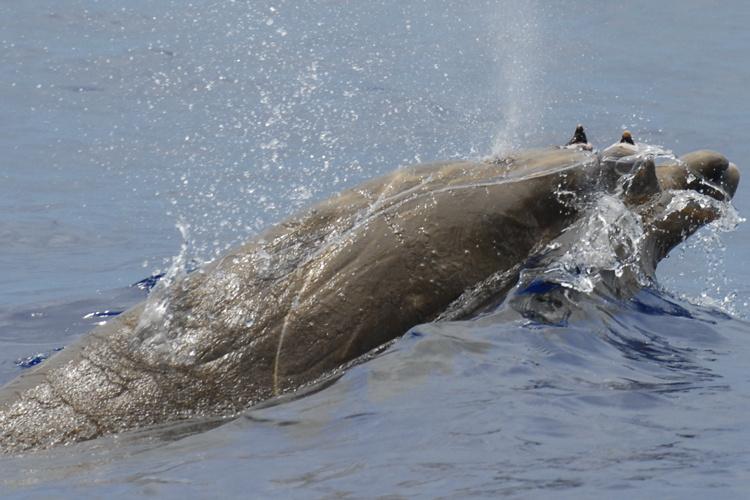 Blainville's beaked whales are little-known members of the beaked whale family, Ziphiidae. Sometimes known as the "dense-beaked whale," this species lives in tropical to temperate waters worldwide. It is typically found in deep, offshore waters (656 to 3,281 feet) off the continental shelf and often associated with steep underwater geological structures, such as banks, submarine canyons, seamounts, and continental slopes.

There is little information on the abundance of Blainville’s beaked whales worldwide, though they are considered to have the most extensive distribution of any whale in the Mesoplodon genus. The beaked whale family is cryptic and evasive, and distinguishing between species in the field can be challenging.

Like all marine mammals, Blainville’s beaked whales are protected under the Marine Mammal Protection Act. They face threats from entanglement in fishing gear, ingestion of marine debris, and human-caused noise.

NOAA Fisheries estimates population size for each stock of Blainville’s beaked whale in its stock assessment reports. A stock is a group of animals that occupy the same area and interbreed. There are insufficient data to determine the population trends for this species.

The northern Gulf of Mexico and western North Atlantic stocks are considered "strategic" because of uncertainty regarding their population size and evidence of fishery-related mortality and serious injury.

As adults, Blainville's beaked whales can reach lengths of approximately 15 to 20 feet and weigh 1,800 to 2,300 pounds. Mature males can be easily distinguished from females and juveniles by a pair of large, visible, tusk-like teeth that erupt and point forward from their heavily arched lower jaw. These tusk-like teeth are sometimes covered with barnacles. Females and juveniles also have teeth, but they remain hidden beneath the gum tissue of the mouth, and their jawline is less curved.

Blainville's beaked whales have a medium-sized, round body with a small, wide-based, slightly hooked dorsal fin located far down the animal's back. They also have a low, sloping, indistinct forehead (or melon). Their coloration varies from dark-gray to brownish and bluish. The animal’s face and underside are pale gray or white, giving it a countershading appearance. The skin may appear wrinkled on the dorsal area and is covered with linear and oval-shaped scars and other markings. Individuals, especially mature males, accumulate scars and scratches with age. Diatom (microscopic planktonic algae) infestation may discolor areas of the skin.

Blainville's beaked whales are usually found individually or in small social groups averaging between three and seven animals, but they have been occasionally seen in larger groups of up to 12 animals. Groups may consist of various combinations of age and sex and/or be segregated depending on age or sex. Adult populations in productive waters over the continental shelf (e.g., the Bahamas) may be grouped in harems that consist of several adult females with a single adult mature male. Males commonly battle over access to females, which is probably the cause of the long, linear scars seen on individuals.

Like other beaked whales, Blainville’s beaked whales are deep divers. Regular dives range from 20 to 45 minutes and commonly reach depths of at least 1,600 to 3,300 feet, but dives of over 54 minutes and up to 4,600 feet have also been recorded. While diving, they use suction to feed on small fish and cephalopods (e.g., squid) in deep water.

The estimated lifespan of Blainville's beaked whales is unknown. They may reach sexual maturity at about 9 years of age. A sexually mature female will give birth to a single newborn calf that is about 6 to 8.5 feet long and weighs about 130 pounds.

Some beaked whales have died from ingestion of marine debris.

Deep-diving cetaceans, like Blainville’s beaked whales, use sound to feed, communicate, and navigate in the ocean. Recently, strandings of this species in the Bahamas because of acoustic trauma have been associated with use of active sonar during naval military activities and exercises. Sound pollution threatens Blainville’s beaked whales by interrupting their normal behavior and driving them away from areas important to their survival, such as breeding and feeding waters.

All Blainville’s beaked whales are protected under the Marine Mammal Protection Act. Our work protects this species by:

Our research projects have helped us better understand Blainville’s beaked whales and the challenges they face. Our work includes: 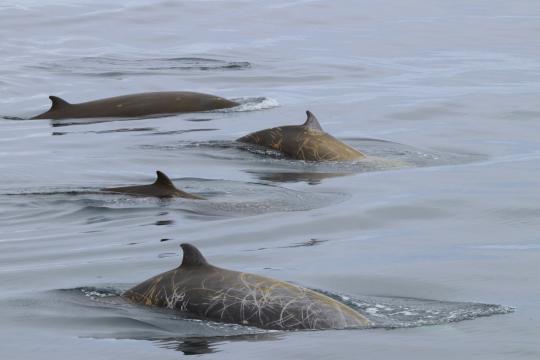 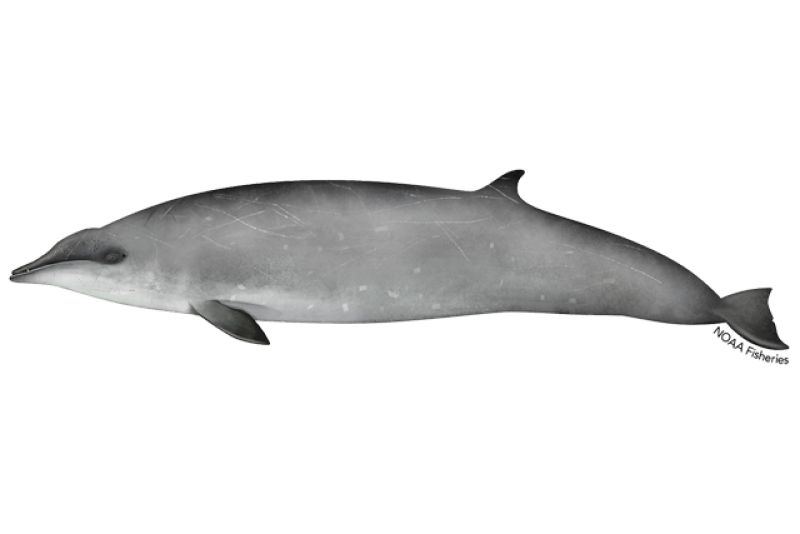 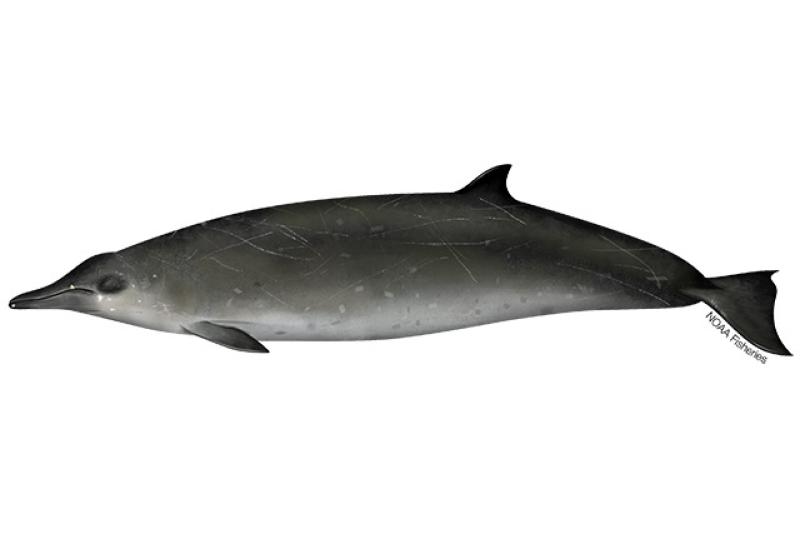 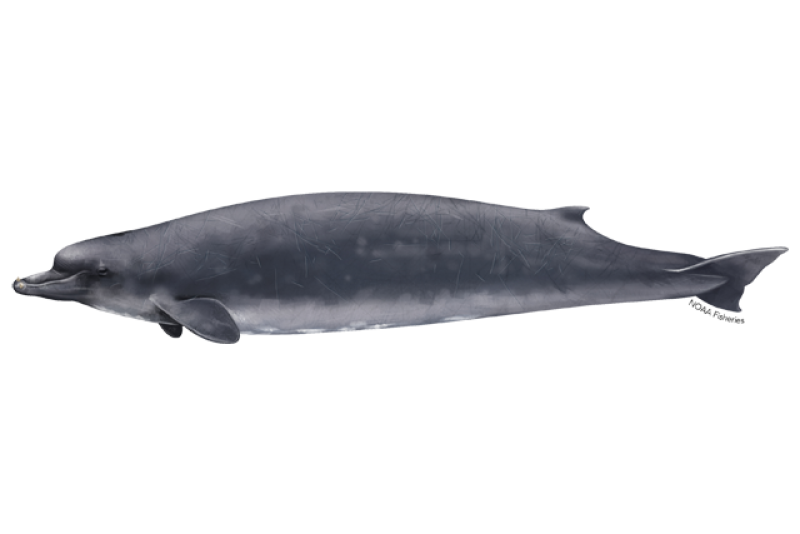 Blainville's beaked whales, like all marine mammals, are protected under the Marine Mammal Protection Act.

Like all marine mammals, Blainville’s beaked whales are protected under the MMPA.

NOAA Fisheries conducts a variety of research on the biology, behavior, and ecology of Blainville’s beaked whales. The results of this research are used to inform management decisions and enhance protection efforts for this species.

NOAA Fisheries conducts research cruises to collect information on beaked whale stocks, such as habit preferences and feeding ecology. For example, we have estimated the abundance of the three Blainville’s beaked whale stocks and other cetaceans, using oceanic research vessels to perform line-transect surveys. Information from this research can be used in management actions to protect these animals.

Our research is also focused on acoustics—using underwater sound to learn more about this species. We study the basic acoustic behavior of cetaceans and fish, mapping the acoustic environment and finding better ways to study cetaceans using passive acoustic technologies. Because Blainville’s beaked whales are difficult to detect visually, and because they dive for extended periods of time, passive acoustic detection is important in studying this, and all, beaked whale species. For example, hydrophone arrays can be towed behind ships to acoustically detect and locate Blainville’s beaked whales during surveys, and archival bottom-mounted recorders are used to monitor long-term occurrence of the species at specific recording sites.

Our acoustic research also assesses the degree to which human-caused activities are changing the underwater soundscape, how these changes may potentially impact marine animals, and what measures can be taken to mitigate these potential impacts. 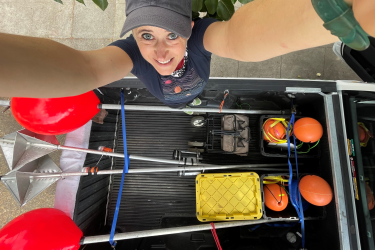 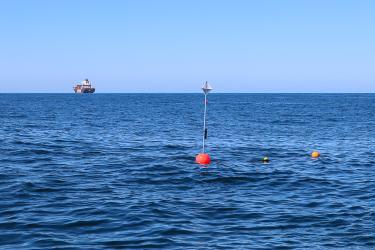