Joyce Ambrosius celebrates the restoration of crucial habitat for steelhead after 16 years of dedication. 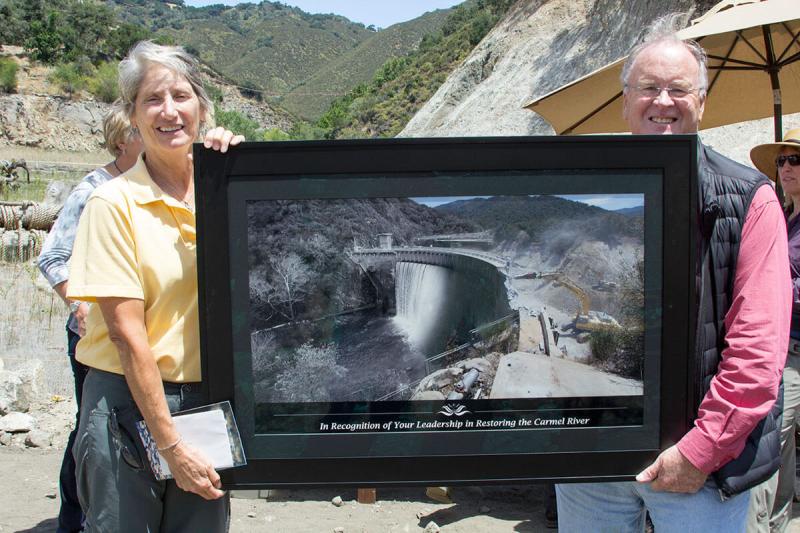 Congressman Sam Farr, at right, presents a framed photograph of San Clemente Dam to Joyce Ambrosius of NOAA Fisheries at a ceremony celebrating the dam's removal. The photograph is a montage of before and after shots blended into a single image. Photo: Jim Milbury, NOAA Fisheries

After 16 years of perseverance, and just one day before her retirement this summer, Joyce Ambrosius of NOAA Fisheries stood on the bank of the Carmel River with the many partners and her co-workers responsible for the removal of San Clemente Dam and marveled at the newly restored waterway.

"It’s fabulous, it is absolutely fabulous!" she said of the largest dam removal project in California's history. "I think the great thing about this project is that we had a really amazing group of people working together to get it completed."

The dam removal had benefits for other riparian wildlife as well, including Federally protected California red-legged frogs and Pacific lamprey. Lamprey had not been seen above the dam since its construction, but have now returned to the newly accessible habitat. While not currently protected under state or Federal law, lamprey are an important part of a healthy ecosystem, providing essential nutrients to the river ecosystem when they die and decompose. 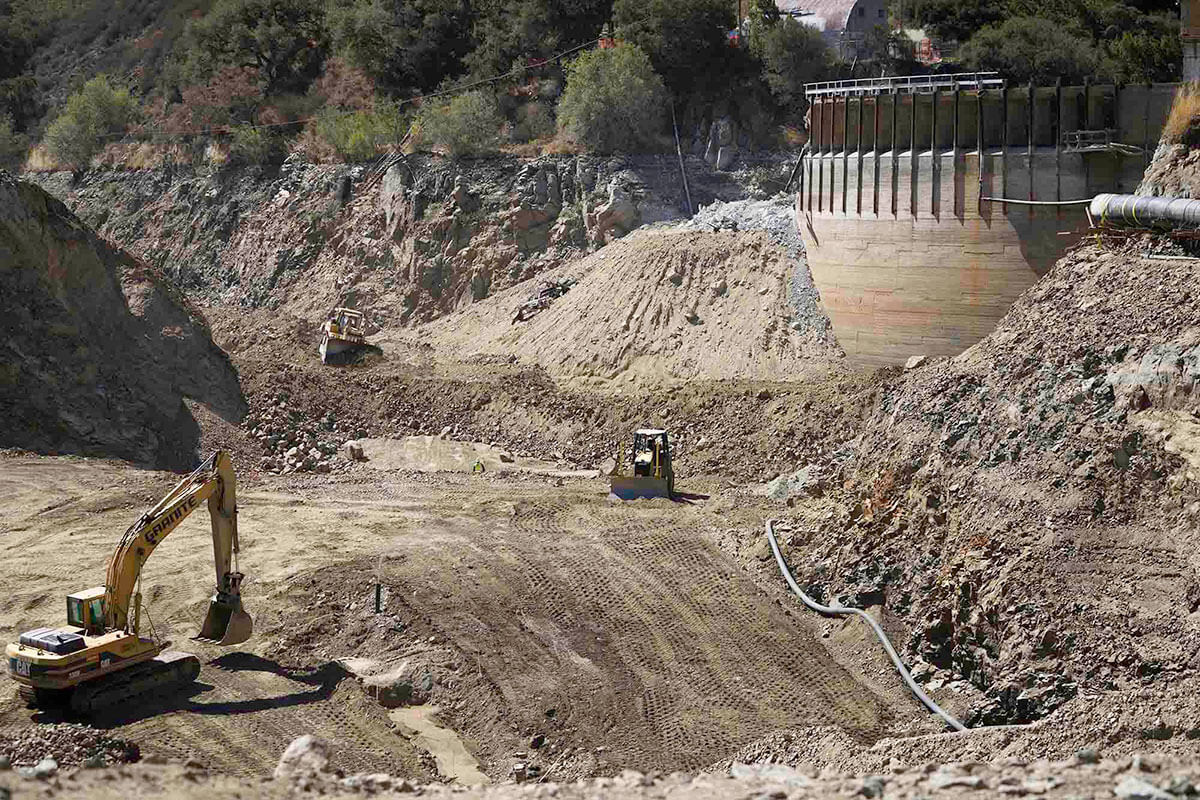 Built in 1921 to provide water for the developing Monterey Peninsula, the dam had long ago filled with sediment -- leaving it nearly useless for water storage. In 2000, the California Department of Safety of Dams declared the dam seismically unsafe and a hazard to those living downstream.

The owner of the dam, California American Water Company (CalAm), was responsible for making the structure secure. Under state and Federal environmental laws the company was required to develop an Environmental Impact Report (EIR) for public review, listing various solutions. 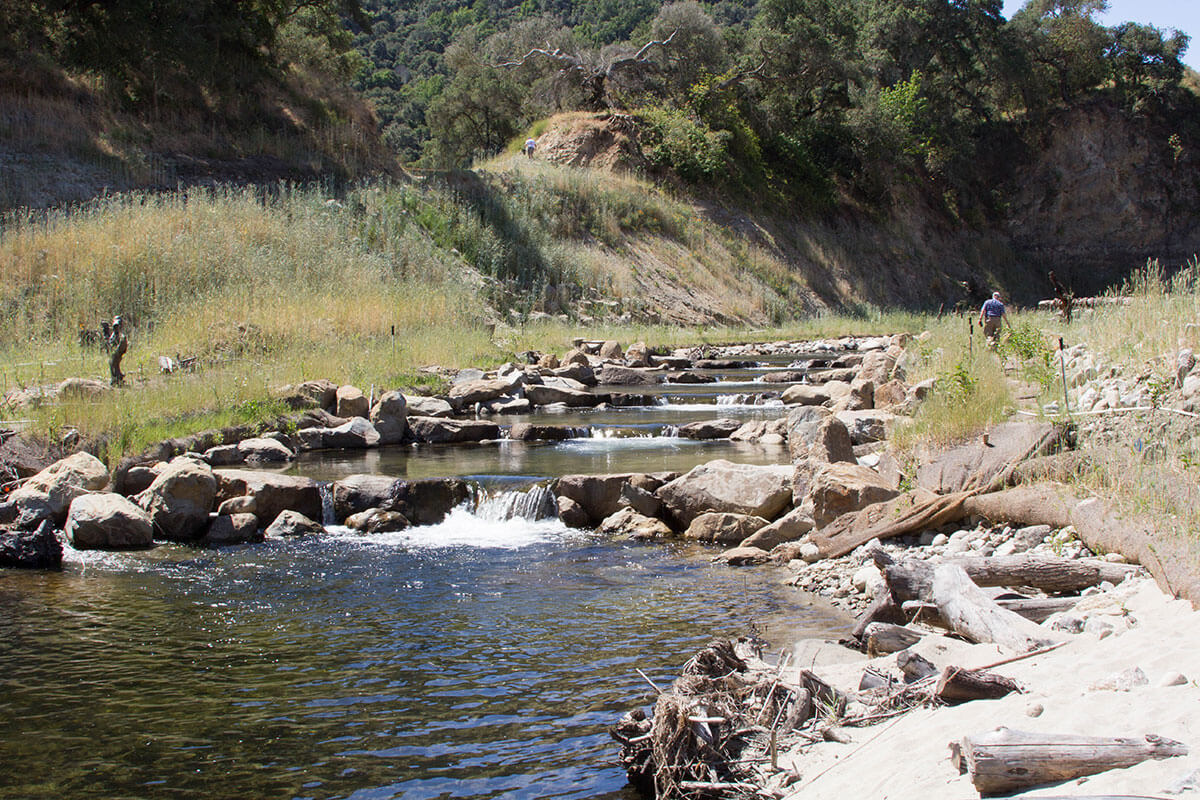 As part of the Federal review process, Joyce and her colleagues in the West Coast Region’s California Coastal Office evaluated the EIR and noticed one important alternative was not included.

“When we reviewed the EIR we found dam removal was not even being considered as one of the possible alternatives,” Ambrosius said. “We didn’t say the dam had to be removed, we only insisted it should at least be looked at as one of the alternatives.”

Ambrosius praised the determination and hard work of numerous staff in NOAA Fisheries’ office in Santa Rosa, Calif., for looking beyond the obvious to find a new way to help the threatened steelhead.

“We had a really dedicated group of biologists and others who could have easily given up on the effort,” she said. “Instead we all stuck with it and now we have many miles of reopened habitat to show for it.”

Removal of the dam was an important consideration for NOAA Fisheries since the Federal recovery plan for South Central California steelhead lists dams and water diversions as the greatest threat to steelhead in the Carmel River, a key waterway for recovering the species.

“Our original project was to buttress the dam, and Joyce was really one of the driving forces to say ‘hey, that may be the proposed project but you have to look at alternatives,’” said Richard Svindland, Vice President of Operations at CalAm.

While the company agreed to look at dam removal, that option would also require removal of an estimated 2.5 million cubic yards – about 250,000 truckloads – of sediment trapped behind the structure. And that was expensive.

Then came a “Eureka moment,” Svindland said. The dam-keeper, Don Lingenfelter, brought up the idea of re-routing the Carmel River around the sediment rather than removing it. The new option reduced the cost significantly, and turned dam removal from a theory into a real possibility.

Still, the project would cost about $34 million more than the least expensive option of buttressing the dam and what the PUC would allow.

“So that’s when NOAA Fisheries partnered with the California Coastal Conservancy. The Conservancy raised the additional money to make up the difference in cost between buttressing the dam and taking the dam out,” Ambrosius said.

After the Conservancy’s successful fundraising effort, in the summer of 2013, the three-year process of re-routing the Carmel River and removing the San Clemente Dam began. A June 6, 2016, ceremony at the dam site celebrated the removal project and those who worked on it.

“It’s mind boggling to look back at all the coordination and collaboration that this project required over the last 16 years," Ambrosius said. "For every two steps forward we had a step back, and we were always continuing to have to solve problems along the way. It was just a fabulous team that was really solution oriented with a positive outlook that really made it happen.”