Explore the surprising role of habitat in fisheries management. 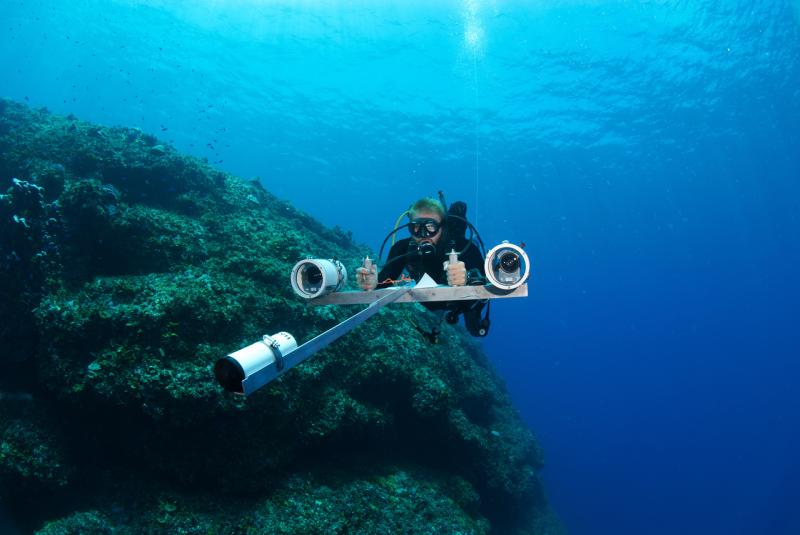 Fish size and growth rate are key elements of fishery productivity. Fish are ectotherms or “cold-blooded,” meaning their body temperature and metabolic rate depends upon the temperature of their environment. A lower temperature results in a higher metabolic rate; therefore, fishes in temperate (cold) zones usually grow larger than those in the warm tropics. However, sometimes we observe large and unexpected changes in body size of fishes at much smaller geographic scales across which temperature cannot explain this observation. Understanding why this variation in size occurs in coral reef fishes is important for developing effective ecosystem-based fisheries management strategies.

An international team, led by researchers from the Pacific Islands Fisheries Science Center, recently completed a study investigating fish size variation across the largest coral reef ecosystem on Earth, the Australian Great Barrier Reef. The researchers surveyed 82 sites within 31 distinct reefs spanning 750 kilometers (466 miles) of the northern Great Barrier Reef. They used underwater video technology, a non-extractive technique, while scuba diving to record and estimate the body sizes of parrotfishes. They tested the patterns against a variety of factors (for example: predation, competition, temperature, and productivity) that might affect body size and discovered that body size was overwhelmingly influenced by how much wave action the reef is subjected to. As parrotfishes feed on the reef itself (or more precisely, a thin film of algae, bacteria, and detritus that accumulates within and on top of the reef), the researchers concluded that effects of wave action on food supply for these fishes is probably the dominant driver. 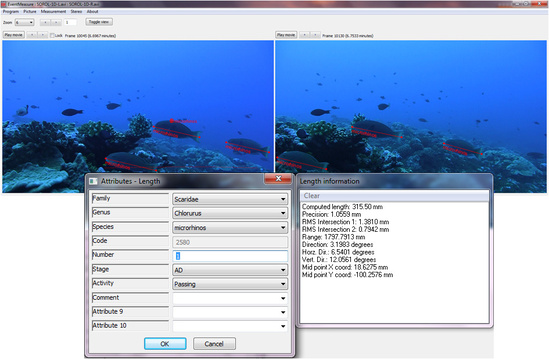 Highly precise measurements from video surveys facilitate a better understanding of factors driving differences in body sizes across coral reef habitats. This is an example of stereo-video analysis and output of fish measurements.

This conclusion, however, sets the stage for a story that becomes quite complex and with some interesting aspects that are not often considered. These parrotfishes were not necessarily doing "better" in one habitat versus another. Rather, the differences observed in body size within each habitat reflected their ability to adapt to and survive in different environments that are shaped by more or less wave action. Surprisingly, these fishes are even able to adjust their mating strategy to each environment. For instance, in sheltered habitats, where these fishes generally grow larger, large males defend territories with multiple females. In contrast, smaller males on more exposed reefs spawned in large groups. The latter scenario also included a large number of "sneaker males"—males that curiously undertake the coloration of a female as a disguise. Interestingly, these differences in mating strategies also had a strong effect on when, and at what size, females change sex—it is typical for parrotfishes to mature as a female and then later in life change sex to a male. 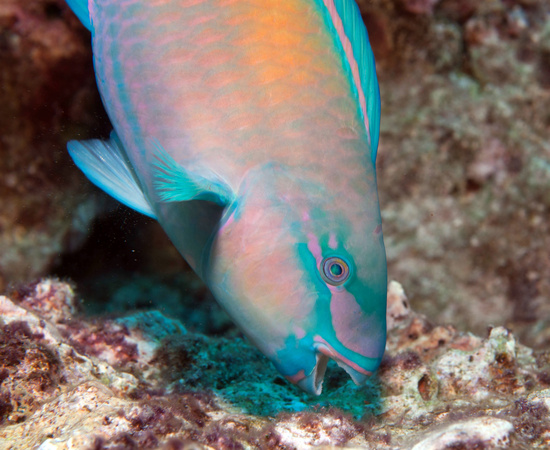 A brightly colored male bullethead parrotfish (Chlorurus spilurus) feeds on protein-rich microbes on and within the reef substrate (Photo © Steven Lindfield). Wave action affects the quantity and quality of these resources, thereby affecting growth and resultant body size of parrotfishes.

The effects of wave energy on coral reef habitats appears to be a fundamental driver of the “pace of life,” even driving some of the most basic aspects of the biology of important coral reef fishes. Coral reef ecosystems are under heavy pressure from rising ocean temperatures, human-induced runoff, and fishing pressure, all of which can affect the structure of habitats. The findings of this study foster a better understanding of how fishes interact with coral reef habitats and provide a baseline for predicting and interpreting future changes in fish productivity as it relates to coastal fisheries.