Boaters Encouraged to “Ease Off” on the Throttle to Protect Turtles 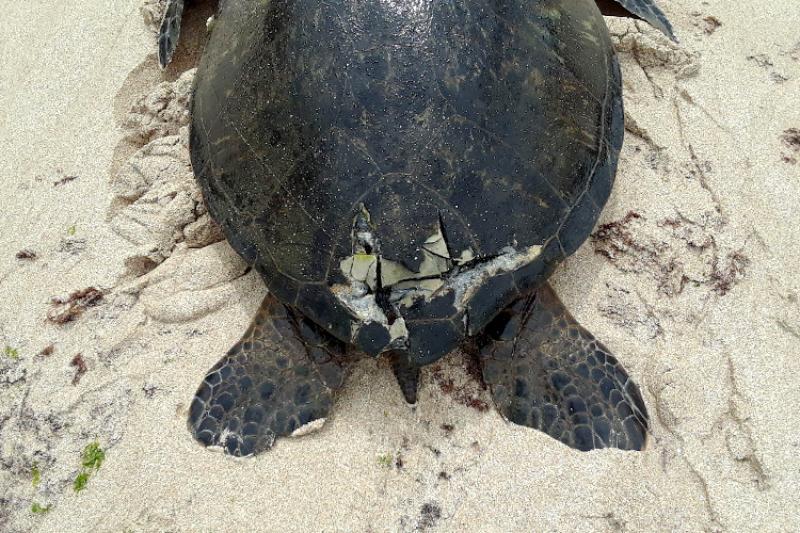 On April 17, 2018, volunteers and staff with Hawaii Marine Animal Response and Malama na Honu alerted NOAA Fisheries to a Hawaiian green turtle at Laniakea Beach, O'ahu that appeared to have been hit by a boat.

Our NOAA veterinarian examined the turtle — a subadult colloquially named Kaipua and known to frequently bask at Laniakea beach — and concluded that it did, in fact, have a propeller injury but determined that the injury was healing naturally. In this case, the turtle would recover best in its natural environment in the ocean. 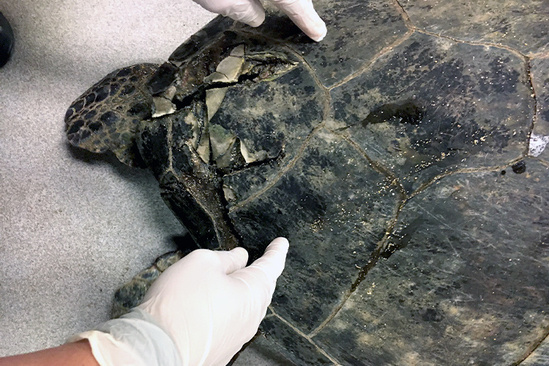 Up-close of Kaipua getting examined by a NOAA veterinarian.

We released the turtle back at Laniakea, where Malama na Honu (a non-profit dedicated to sea turtle outreach and education) and the public can continue to monitor the healing process.  “If necessary, the animal can always be brought back in for further evaluation,” assures Irene Kelly, NOAA’s sea turtle recovery coordinator.

We've etched the number "1016" onto the turtle’s shell for easy identification. The public is welcome to report (via photos) if they see this animal so that we can monitor its recovery progress (email: RespectWildlife@noaa.gov). 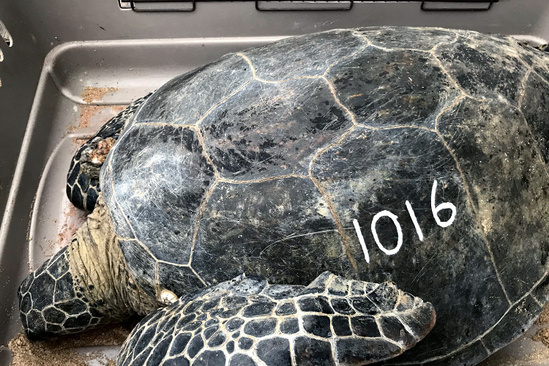 "Turtles are very resilient, having evolved to sustain tiger shark bites, among other things," Kelly says. "We have seen other turtles heal from similar injuries and we remain very hopeful that Kaipua, or #1016, will be fine. That said, however, this healing process will likely take months or more, and maybe over a year.”

There are measures that boaters can take to reduce the potential of a boat collision. Kelly reminds boaters to post a look-out when traveling near coral reef habitats and drive slowly (5–10 knots) near and around harbors.

Sea turtles surface to breathe and linger on the surface while breathing. Larger turtles — subadults and adults — have slower reflexes and may have a hard time responding to quick-moving boats and jet skis.

"All boat operators, whenever able, should post a lookout to help watch for marine animals, coral heads, swimmers, and divers," says Clifford Inn, boating safety education specialist with the State of Hawaiʻi Division of Boating and Ocean Recreation (DOBOR). "This simple practice could greatly reduce the number of boat strikes and potential fatalities."

"Hotspot" areas for turtle strikes include Kāneʻohe Bay and the North Shore of Oʻahu, as well as near harbors throughout the state.

Inn encourages boaters to "ease off on the throttle" until in deeper water, especially in waterways near harbors. Employing secondary observers on their vessels and moderating speeds over shallow reef habitats may also prevent collisions.

Given the recovering green turtle population, boat strikes are not uncommon in Hawaiʻi. NOAA Fisheries receives about 10 to 25 turtles struck by boats each year, but this is a conservative estimate, as not all turtles strand.

Boat collisions result in blunt trauma and propeller injuries. Sometimes, thankfully, they survive; often, however, they do not. Since 1990, there have been over 330 boat strikes.

NOAA currently has another green turtle rehabilitating in tanks at the Daniel Inouye Regional Center on Ford Island, Honolulu, which stranded at Kaloko-Honokōhau, Hawaiʻi Island due to propeller injuries. This turtle required surgery to repair the shell and will need 4–6 weeks rehabilitation prior to release.

NOAA and DOBOR have committed to collaborative efforts to raise awareness among boaters about ways to avoid and minimize accidental collisions with turtles or other protected species, such as whales.

We are currently developing signage and outreach materials and welcome feedback on strike-prevention strategies boaters may already be using.

We remind boaters to slow down near and around harbors and watch out for turtles, and we encourage them to report accidental collisions to the state-wide reporting hotline: 888-256-9840.