An additional $1.2 million in funding will support an effort underway to rebuild more than 300 acres of marsh habitat and help protect local communities from storms and flooding. 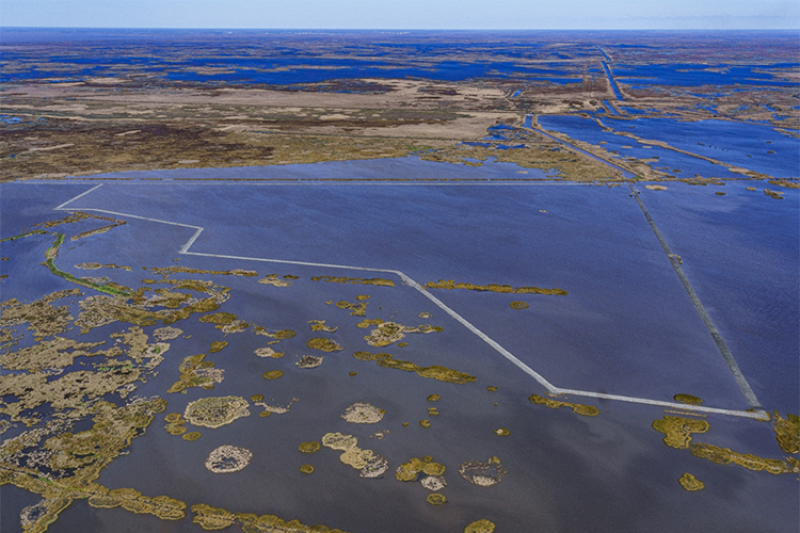 Aerial photo of the 308-acre marsh creation area at Cameron Meadows. The containment dikes have been constructed and the marsh fill will commence in September 2021. Credit: Lonnie G. Harper & Associates, Inc.

An additional $1.2 million in funding has been approved for an ongoing, NOAA-supported effort to rebuild more than 300 acres of marsh in coastal Louisiana. The Cameron Meadows Marsh Creation and Terracing Project is helping restore the natural buffer that protects communities in southwest Louisiana from damage caused by hurricanes and storm surge.

To rebuild this important habitat, NOAA partnered with the Louisiana Coastal Protection and Restoration Authority. In 2017, we secured $32 million from the Coastal Wetlands Planning, Protection, and Restoration Act program to rebuild more than 300 acres of degraded marsh in Cameron Meadows. The CWPPRA Task Force recently approved an additional $1.2 million in funding for the project.

Coastal marshes provide tremendous benefits—they filter our water, provide habitat for fish and wildlife, and protect communities from floods and storms. But our nation’s marshes and wetlands are disappearing at a significant rate, particularly in Louisiana. In the Cameron Meadows area, hurricanes, land subsidence, and other factors have led nearly 7,000 acres of marsh to degrade into open water over the past several decades.

Construction on the project began in February 2021. Approximately 1.9 million cubic yards of sediment will be dredged from the Gulf of Mexico and pumped to the project site, five miles inland. The sediment will be used to build more than 308 acres of marsh. An additional 11 acres of land will be built with terracing, which will help slow down waves, reduce erosion, and allow sediment to drop out and create new land. Work is expected to be completed later this year.

When complete, the new marsh will help protect communities in the area from flooding due to hurricanes and other storms. It will also provide important habitat for fish and wildlife that rely on Louisiana’s marshes for food and shelter.

Since 1990, the CWPPRA Program has served as the primary means for responding to coastal wetland loss in Louisiana. NOAA has been the federal sponsor for construction of nearly 40 restoration projects through CWPPRA, restoring more than 12,500 acres of vulnerable coastline.

Luis visiting the CNN studio in Atlanta for an interview while in a previous position. Photo courtesy of Luis Noguerol.
Feature Story

Last updated by Office of Habitat Conservation on July 26, 2021