Researchers are learning what underwater recording devices revealed about humpback whales migrating to Caribbean islands in the winter of 2017. 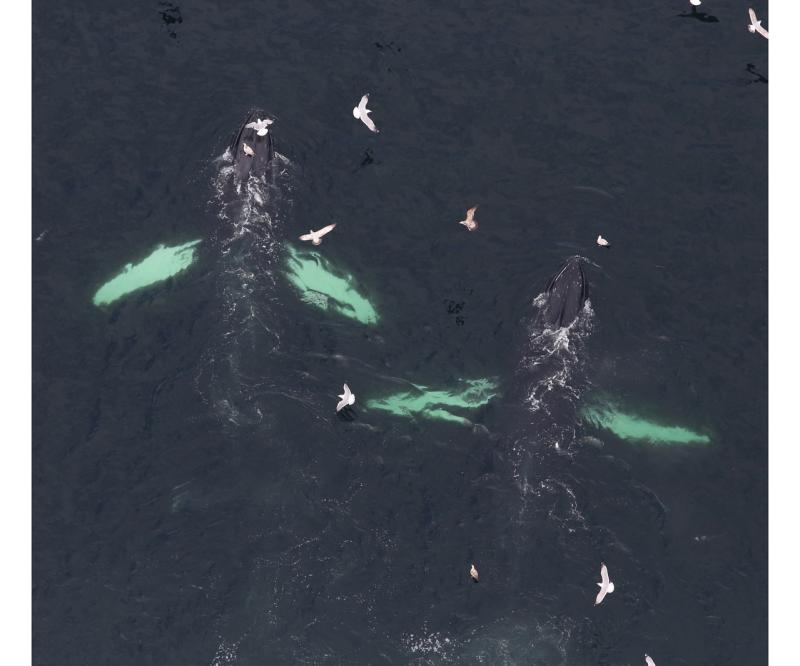 Researchers from NOAA’s Northeast Fisheries Science Center (NEFSC) and local colleagues on a number of Caribbean islands are learning what underwater recording devices deployed in 2017 revealed about humpback whales migrating to that area in the winter and early spring.

Funded by a small grant from NOAA’s international affairs office, two teams from the NEFSC’s Woods Hole Laboratory traveled to Aruba, Bonaire, the Dominican Republic, Guadeloupe, Martinique and St. Martin in December 2016. Working with local collaborators on each island, they deployed one of two types of underwater passive acoustic recording devices off of each island to record the differences in songs and seasonal differences in the arrival of humpback whales. The devices recorded whale sounds for six months. All of the recording units were recovered in late May-early June 2017.

“Humpback whale songs were recorded at five of the seven monitoring sites in the Caribbean, and it was generally present from January through May, with variation in the seasonal timing of song presence among sites,” said Heather Heenehan, who leads the Caribbean Humpback Acoustic Monitoring Program (CHAMP) in the NEFSC’s marine mammal acoustic group. “Humpback whales were not recorded in Bonaire or Aruba, but the Bonaire recordings did reveal the sounds of sperm whales and dolphins as well as near constant fish sounds. In Aruba the human-produced noise levels, especially boat traffic, likely drowned out any humpback sounds."

Some of the humpback whales arrive in the Caribbean in December and leave by February, while others arrive in March and leave by late May. The whales are thought to migrate from Northwest Atlantic waters off of New England and Canada, including the Gulf of Maine and the Grand Banks. Another group is thought to migrate from the eastern North Atlantic off of the Cape Verde Islands, where they head after spending the summer in northeast Atlantic waters off Norway and Iceland.

“We didn’t know what to expect from the recordings,” said Sofie van Parijs, who heads the passive acoustics monitoring program at the NEFSC. “We expect to hear humpbacks off of the Dominican Republic, but we could hear them at unexpected times. Some humpback whales have been sighted off Bonaire where they aren’t supposed to be at all, but just because there is not a record does not mean they are not there. The first step in determining if there are two distinct populations of humpbacks in this region was to find out where they are going and when.”

Future analyses of the acoustic data will focus on the content and structure of humpback whale sounds, to see whether there are any differences in the northern and southern song structure. "Differences in song structure can be used to identify separate breeding populations, which may ultimately help inform management and policy decisions," Van Parijs said. "Additional analyses will explore the soundscape at the recording sites including the acoustic footprint of human activities.”

Data analyses began after the units were recovered. Heenehan, a visiting assistant lecturer in the Department of Environmental Studies at the University of New England during this academic year, has students involved there this semester, and this summer she will be back at the NEFSC in Woods Hole working with a NOAA Hollings Scholar on the data. “Involving students in CHAMP is something we have done from the beginning,” said Heenehan. “We have a lot of material to work with.”

The humpback songs, and the timing of those vocalizations, were recorded by two different types of  autonomous, bottom-mounted acoustic receivers: Marine Autonomous Recording Units (MARUs) and smaller SoundTraps. One recorder was deployed at each study site, with the exception of Bonaire and Guadeloupe East, where both a MARU and SoundTrap were deployed together. Both types of recorders can be recovered by divers.

“This was our inaugural field season and we hope it will lead to the establishment of an acoustic monitoring program for humpbacks in this region,” said Van Parijs. “We want to build capacity, to enable researchers, resource managers, sanctuary staff, government officials and other interested groups in the Caribbean to collaborate to gain a better understanding of the whales that migrate to their area.”

NOAA has a sister sanctuary program with the Dominican Republic which links the Stellwagen Bank National Marine Sanctuary off the Massachusetts coast with the Silver Bank Humpback Whale Sanctuary, the first marine mammal sanctuary in the Caribbean.