Make a splash during Whale Week with these computer, smartphone, and Facebook wallpapers. 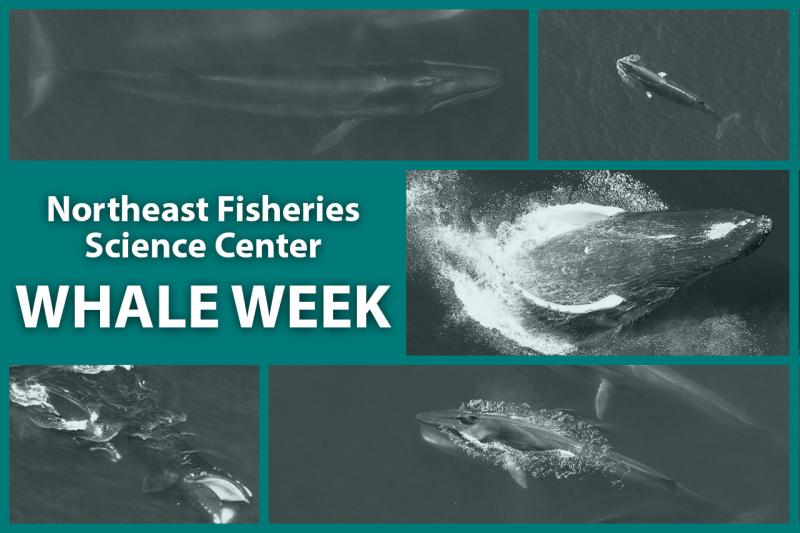 The Northeast Fisheries Science Center’s aerial whale survey team documents the seasonal distribution of North Atlantic right whales off the northeastern coast of the United States and Canada. During their surveys, the team also photographs and documents other large whales as they encounter them. Below are just a few of the amazing photographs they’ve taken over the years. Now you can download them to use as wallpapers for your favorite digital devices! 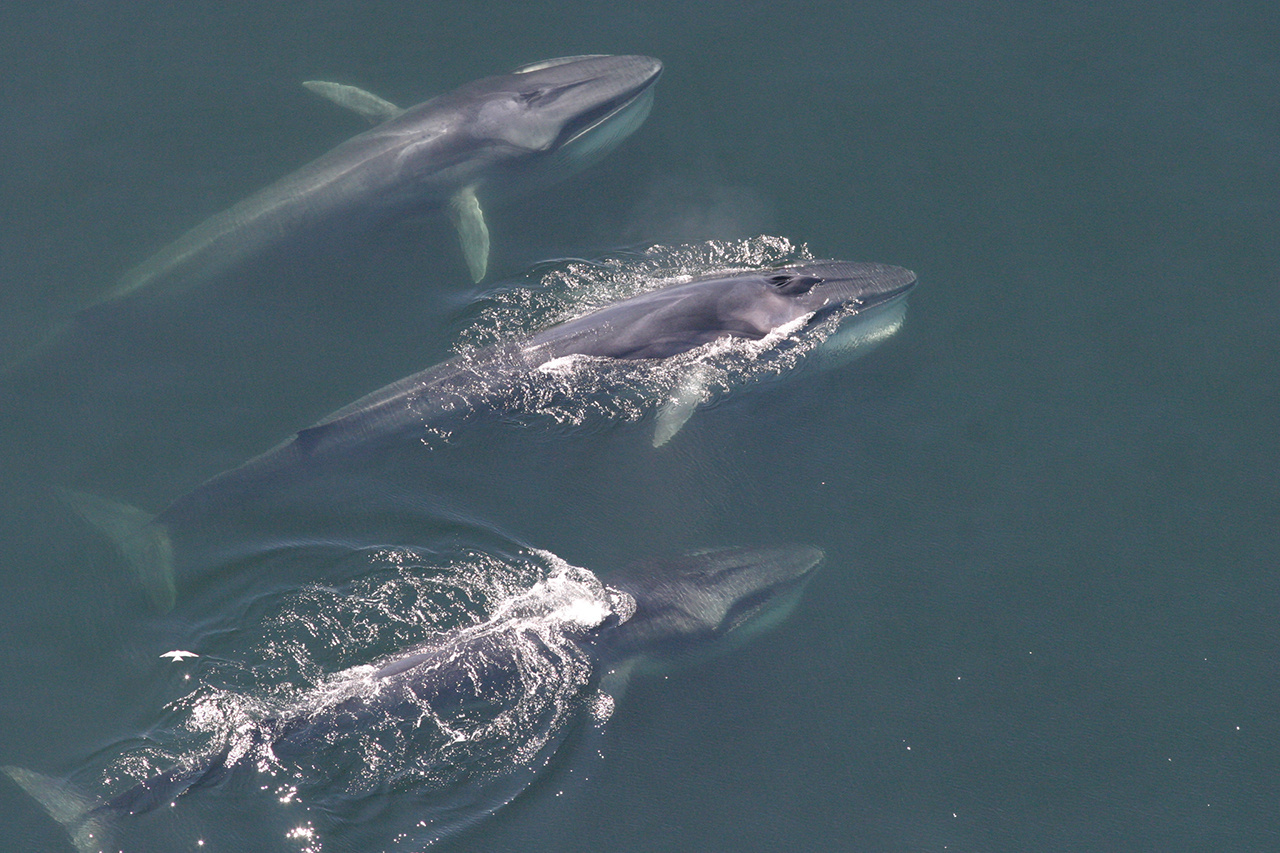 Not all whales travel in pods. Most toothed whales—like dolphins, orcas, and sperm whales—travel in pods, which are tightly formed family groups. Larger baleen whales like these finbacks typically travel singly or in pairs. They can be spotted in groups of three or more, but it’s only temporary. Why the lone wolf behavior? Mainly because they need to consume a lot of food each day. If they hung around each other in a group, they’d be competing for food and never get enough. But their loner behavior doesn’t mean they’re not communicative. We know from underwater acoustic data that they’re constantly in touch with each other through their vocalizations. So if it’s not a pod, what do you call their group behavior? Whale scientists use the term “aggregation” to define a large group of baleen whales hanging out in the same area. Learn more about whale research happening in our region. 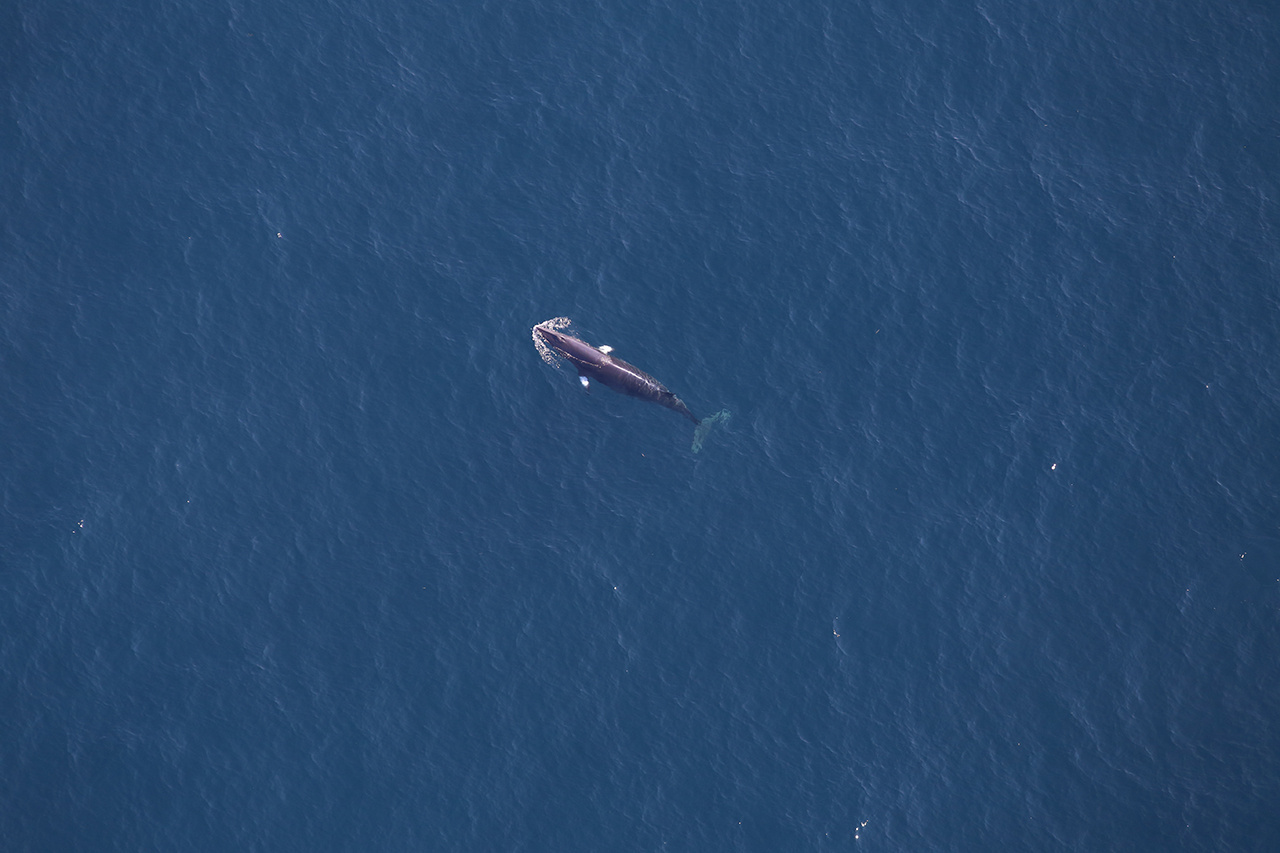 Minke whales are the smallest baleen whale in North American waters. They can reach lengths of up to 35 feet and weigh up to 20,000 pounds. You’d think something that size would be easy to photograph, but according to research fisheries biologist Allison Henry, that's definitely not the case. They’re quick and hard to photograph. Minke whales feed by side-lunging into schools of prey and gulping large amounts of water. They dine on krill and small schooling fish like anchovies, herring, capelin, and sand lance. Minke whales create sounds that include clicks, grunts, ratchets, thumps, and something we call "boings." Their distinct vocalizations can vary depending on species and location. What do they sound like? You can listen to minke and other marine animals sounds in the ocean. 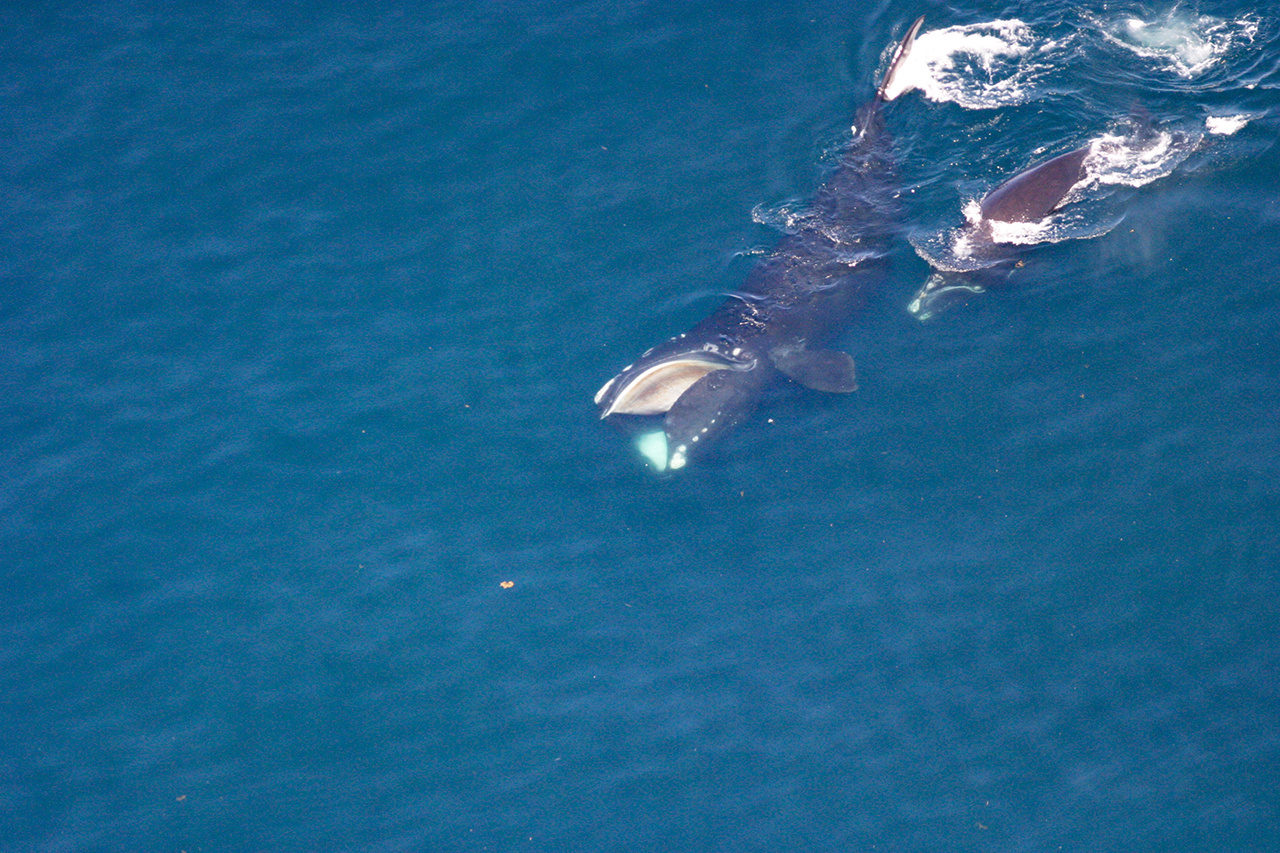 Meet Aphrodite and her 2007 calf Eros. She's named for the Greek goddess of love when scientists noticed the heart shaped mark on her right flank. This photo, taken in May 2007, shows her doing something scientists call “side-feeding.” It’s a behavior our aerial survey scientists don't get to see very often. They named her calf after Eros—the Greek god of love—because of his lineage and the heart-shaped callosity pattern on his head. Eros was entangled in fishing gear when he was just a year old. Fortunately, trained experts were able to partially disentangle him, and he shed the remaining gear on his own. Fishing gear entanglement is one threat endangered right whales face, but it’s not the only one. Ship strikes are another major threat. When Eros was five, he was hit by a small vessel and survived. He bears scars from the propeller across his back. Today, researchers estimate that only about 400 right whales are left in the world. What can you do to help them? Here are 10 things you can do to help right whales.

Download the North Atlantic right whale wallpaper for your: 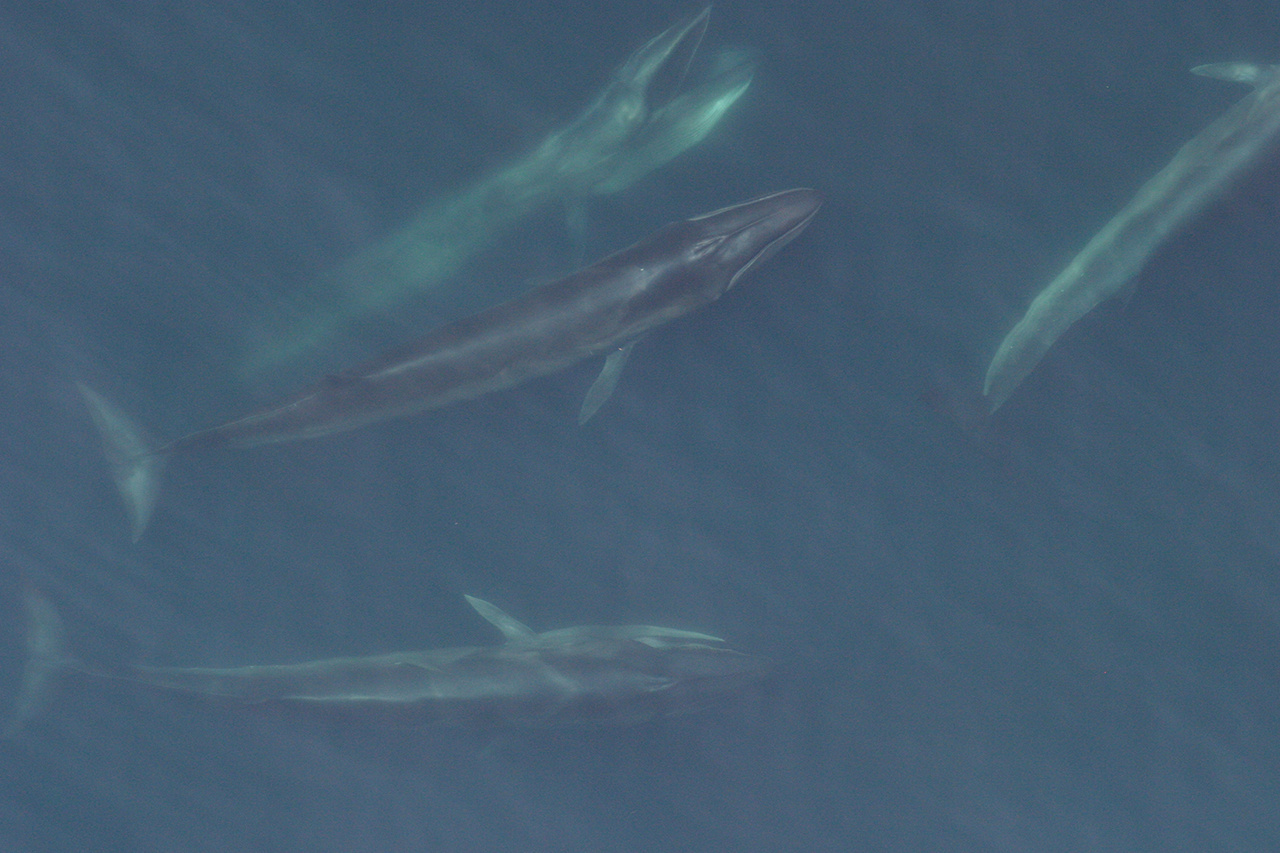 Sei whales (pronounced SAY) can be found in subtropical, temperate, and subpolar waters around the world. You might be wondering how it got its name. Well, this whale was often found around a schooling fish called pollock in Norway. The Norwegian word for pollock is "seje.” The name "sei" is an adaptation of “seje.” Sei whales are usually observed alone or in small groups of two to five animals. They are fast swimmers that can reach speeds of more than 34 miles per hour. That kind of speed requires quite a bit of energy. Sei whales can eat about 2,000 pounds of food per day! They do this by eating a variety of prey. In fact, they’re one of the few baleen whales in the world that can eat plankton, small schooling fish, and cephalopods including squid. Each prey group requires a different feeding strategy. When feeding on plankton, they skim through the water and let their baleen filter and collect the plankton. When feeding on fish, they lunge through schools taking big gulps of water which they force out through their baleen. Doing this traps prey in their mouths. Sei whales are listed as endangered. Two of the biggest threats to their survival are vessel strikes and gear entanglement. Learn more about sei whales. 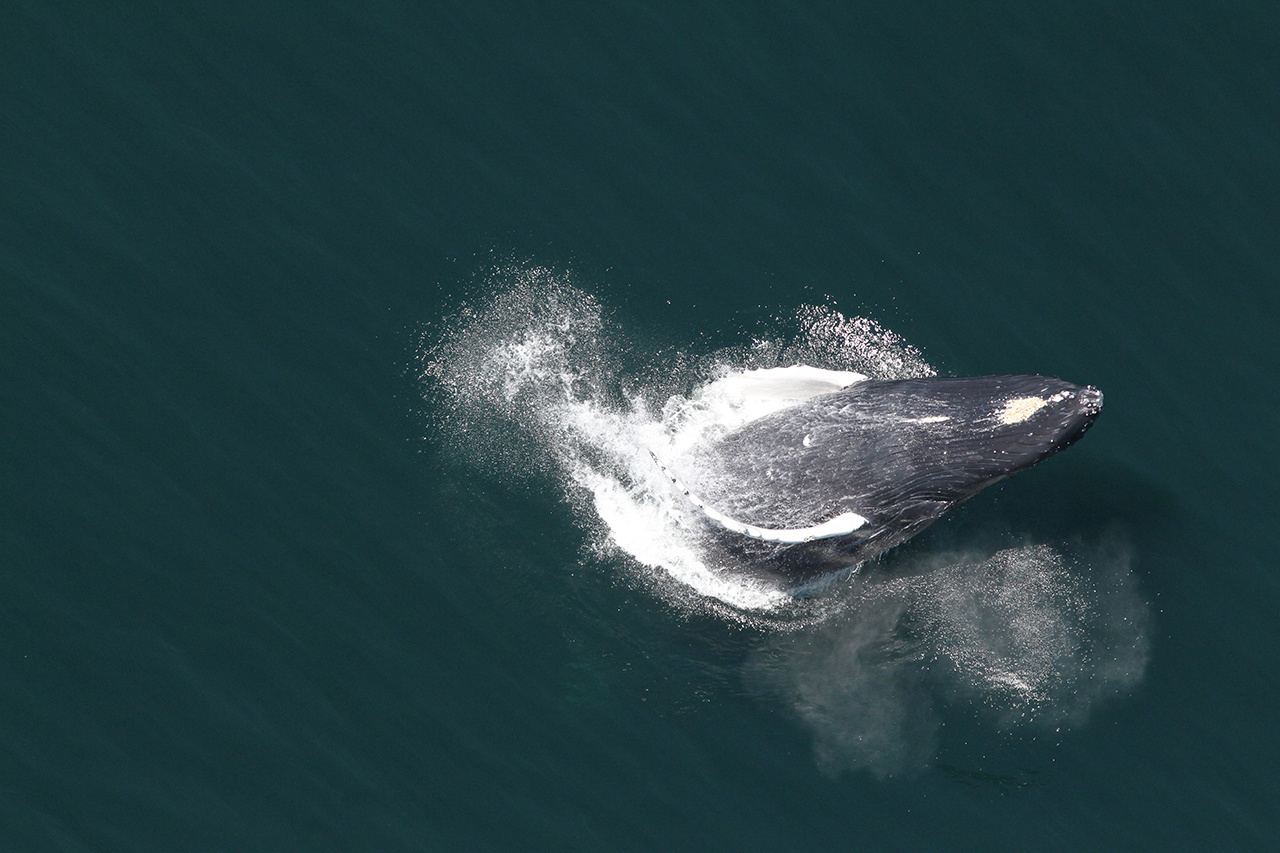 Humpback whales live in oceans around the world. They travel incredible distances every year and have one of the longest migrations of any mammal on the planet. Some populations swim 5,000 miles from tropical breeding grounds to colder feeding grounds. Two populations feed during the spring, summer, and fall throughout an area that extends from the Gulf of Maine to Norway. Both populations migrate south during the winter to mate and give birth. This occurs in the West Indies, Cape Verde off the coast of Africa, and possibly other areas. The humpback whale gets its common name from the distinctive hump on its back. Its long pectoral fins inspired its scientific name, Megaptera, which means “big-winged.” Whale watchers around the world enjoy seeing humpbacks because they’re very active at the surface. They jump out of the water and slap it with their pectoral fins or tails. How can you enjoy whale watching without them or you putting yourself in danger? View our marine life viewing guidelines.