NOAA and partners have seen success in efforts toward Chinook salmon recovery in the Skagit River estuary, but much more work is needed to achieve population recovery goals. 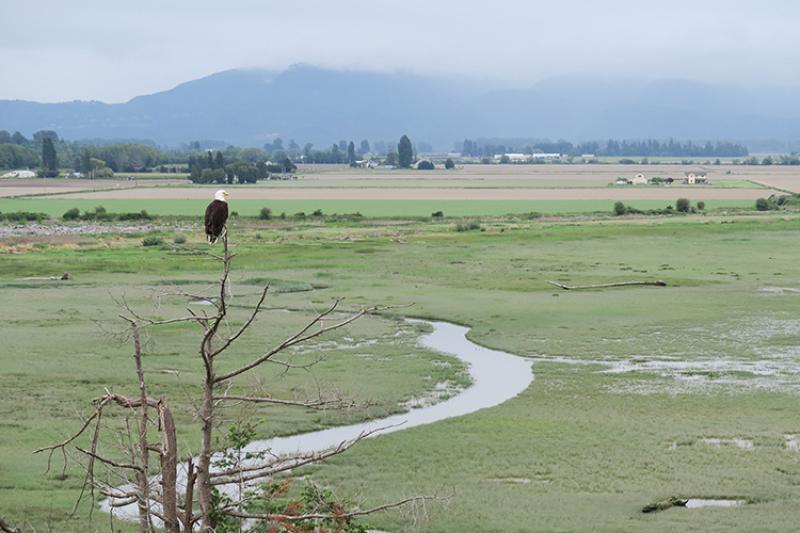 In the Skagit River estuary—part of Washington’s Puget Sound—the work of NOAA and partners to restore habitat for Chinook salmon is showing positive results. On a project-by-project basis, restoration efforts are accomplishing their goals for juvenile salmon. However, Chinook need more healthy habitat in Puget Sound to fully rebound from their status as threatened.

Throughout the West Coast, nine species of Chinook salmon are protected under the Endangered Species Act—including Chinook in Puget Sound. Although many factors have contributed to their decline, historic loss of estuary and tidal marsh habitat is one critical component limiting their recovery. Restoring habitat for Chinook and their prey provides young salmon with places to feed, rest, and grow. 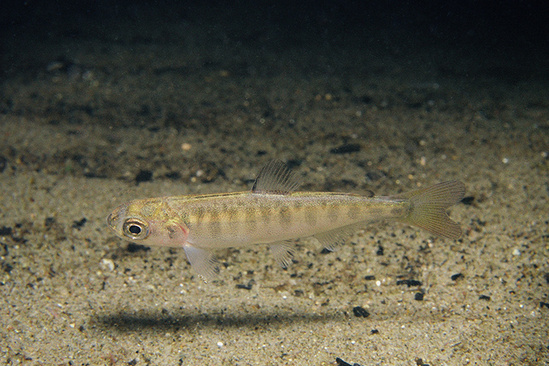 Located where streams and rivers meet the ocean, estuaries have natural, slow-moving channels that provide salmon refuge from predators, rest during migration, opportunities for feeding and allow them to adjust to salt water environments. This habitat is particularly critical for juvenile Chinook (known as “smolts”). Smolts spend almost a month of their lives growing in these areas before migrating out to Puget Sound.

Human activity has impacted these important estuary habitats, cutting off the natural connection to the ocean. Without enough habitat to go around, young salmon can be forced to leave these much-needed refuges before they’ve grown large enough to survive in the open ocean. 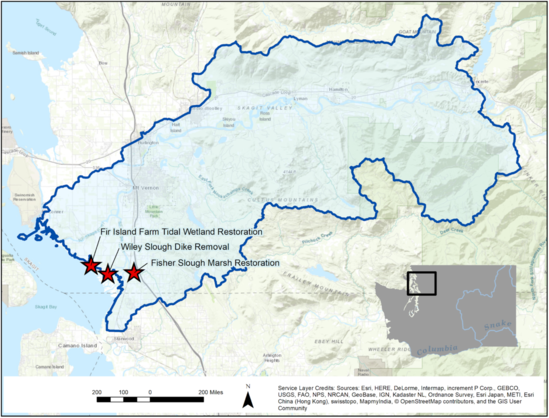 The Skagit Chinook Recovery Plan (PDF, 97 pages) calls for the restoration of approximately 2,700 acres of estuary habitat in order. This will achieve the additional 1.35 million Chinook smolts needed for a sustainable population. Through our Community-based Restoration Program and other efforts, NOAA Fisheries and partners have supported multiple projects to help reach those goals, including those below.

One of NOAA Fisheries’ earliest efforts on the Skagit River is Fisher Slough. This project restored habitat in a way that benefited fish, farmers, and flood control. Alongside our partners, including The Nature Conservancy, we restored 56 acres of slough—or marsh—habitat for fish. The project also provided nearly five times the storage of floodwaters. The work is projected to support up to an additional 22,000 juvenile Chinook each year and provide an estimated $9 to $20 million in economic return. It will protect neighboring communities and agricultural land from floods, among other benefits.

At Wiley Slough, the Washington Department of Fish and Wildlife and the Skagit River System Cooperative led the effort to restore 157 acres of estuary habitat. Over the long-term, restored tidal channels within the site could support 74,000 young salmon.1 Currently, ponding water in large, low-lying areas of the site give it the capacity to hold more than four times that number of salmon. Its capacity is expected to decrease as the marsh matures and builds up through the accumulation of sediment and vegetation. Although the project supports large numbers of Chinook salmon, NOAA and partners are supporting adaptive management of the site. This will ensure that the newly-constructed infrastructure provides drainage and flood protection to neighboring properties.

Most recently, NOAA supported the Washington Department of Fish and Wildlife in implementing the Fir Island Farm project. This project restored 131 acres of tidal marsh and tidal channels. As with other projects, existing dikes were moved further back to restore tidal exchange and salmon access to the site. The new infrastructure also improved protection storm surge and maintained agricultural drainage for upstream landowners. Monitoring has estimated that the site currently has the capacity to support more than 60,000 juvenile Chinook. 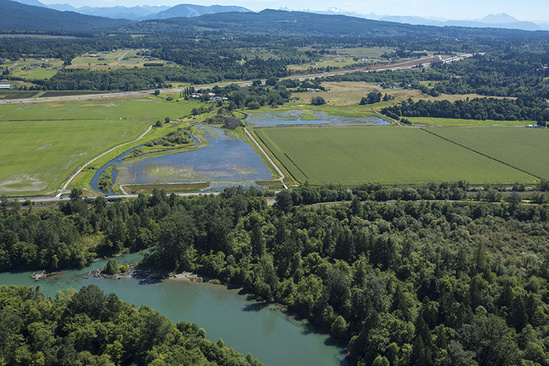 Scientists from the NOAA Northwest Fisheries Science Center and Skagit River Systems Cooperative are looking at the larger Skagit River estuary. They are starting to see how these individual projects are collectively benefiting Chinook across the delta. They have found that, due to greater habitat availability, juvenile Chinook are less crowded in the estuary habitats and are staying there for longer periods of time.

However, much more work remains to fully recover populations in the Skagit River overall, across Puget Sound, and along the West Coast. Although juvenile salmon have seen success, scientists need additional monitoring to understand if these improvements are sustainable and how they translate into more adults returning to spawn.

1Estimates of the numbers of smolts that a site could support do not represent actual numbers of fish counted at the site at any one year. Estimates are based on models that use the wetted channel area and other factors and assume a particular number of smolts migrating out of the watershed.

Last updated by Office of Habitat Conservation on July 31, 2019