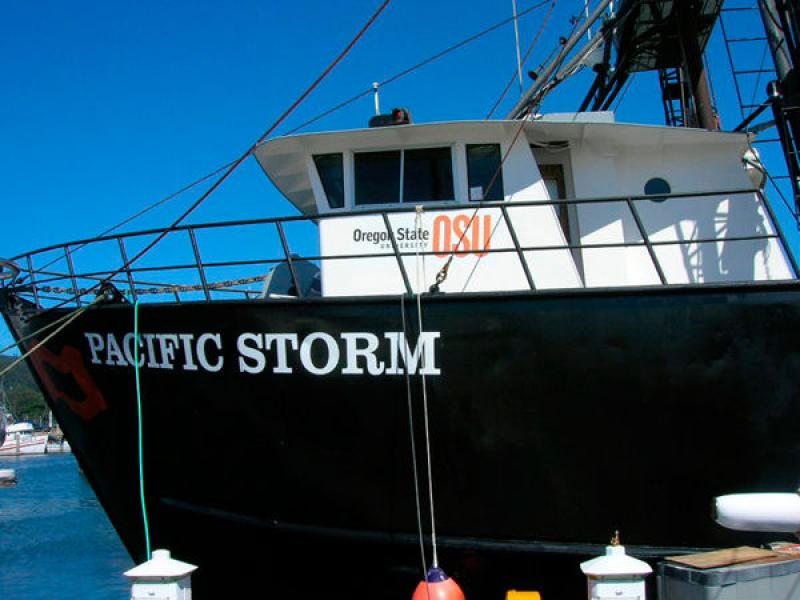 Earlier this fall, Northwest Fisheries Science Center staff Waldo Wakefield, Elizabeth Clarke, Erica Fruh, and Russell Haner explored and mapped the underwater section of the Northern San Andreas Fault (NSAF) aboard the research vessel Pacific Storm. The fault, which stretches from the Mendocino Triple Junction – an area in northern California where three tectonic plates meet – south through the San Francisco Bay area, was thought to have ruptured in the great San Francisco earthquake of 1906, causing rifts and scarps (step-like features) in the seafloor. But for over a century the underwater portion of the fault remained largely unexplored.

The ocean exploration team consisted of scientists from NOAA Fisheries, Oregon State University, the U.S. Geological Survey, and the Woods Hole Oceanographic Institution (WHOI). Dr. Clarke, Ms. Fruh, and LCDR Haner, together with collaborators from WHOI and the Pacific Islands Fisheries Science Center, conducted surveys of the area around the fault using an Autonomous Underwater Vehicle (AUV). After programming, AUV Lucille was deployed into the ocean and “flew” a few meters above the seafloor, taking high definition photographs later blended together to create a photomosaic (large photograph) of the area.

Dr. Wakefield used an EK60 multi-frequency quantitative sonar system to image both fish communities and the deep scattering layers associated with the fault. Deep scattering layers are schools (aggregations of fishes or organisms) that appear on the sonograms. Curt Whitmire, also from the NWFSC, provided logistical and GIS support from shore.

During the first leg of the expedition, the team used a multibeam echosounder aboard the Derek M. Baylis to study the surface of the fault. A type of sonar, the multibeam echosounder was mounted on a specially designed pole below the sailboat’s keel, where a series of sound waves were sent out to the seafloor. The time it took to hear an echo off of the seafloor was measured and used to determine the depth of the water.

Data on the layers of sediment and rock deep under the surface of the seafloor were then collected using a system called a seismic reflection “mini-sparker.” By sending high voltage electricity down into the water at set intervals, bubbles and sound were created, measured, and recorded on a computer, creating a sonogram of the earth’s crust and adding to the image of the fault.

Using this data, the explorers were able to develop a series of priority dive sites for AUV Lucille along a 50 nautical mile section of the fault. Dives were conducted where the fault was covered in sediments and where data from the first two legs showed outcrops of rocks.

From the multibeam echosounder, the team now had a virtually complete bathymetric map of the submerged fault. When combined with over 100 sections of seismic reflection data, these formed a complete 3-D image.

During the eight days that AUV and sonar operations were conducted on board the Storm, 14 AUV missions were completed and AUV Lucille returned tens of thousands of photos of the seafloor that will be used to describe both the ecosystem and sediments around the fault. The fisheries sonar system was used to conduct complementary acoustical surveys of the overlying water column.

The photos taken by AUV Lucille provided researchers with information about the composition of the seafloor, along with associated fish and invertebrate communities. The fault environments were found to be home to fish and invertebrates commonly found in this area of the California Current, like Dover sole, English sole, rex sole, and skates, as well as sculpins and poachers.

Where there were outcrops of rocks, the images taken by AUV Lucille showed filter feeding invertebrates. Dense communities of the feather star or crinoids were found near these outcrops. Other species found include the giant anemone, basketstars, and in some areas, sponges. Above the seafloor, the quantitative sonar system provided images of fish and micronekton (small, mobile organisms) associated with the fault.

The research group made their research as “green” as practical. The Baylis, a San Francisco-based sailboat owned by SeaLife Conservation, is powered by a combination of wind and diesel. The Baylis runs quietly and emits little pollution. During the first and second legs of the cruise, the Baylis only used an average of 1.6 gallons of diesel per hour, compared to the 18 to 30 gallons per hour used by similarly sized diesel powered research vessels. The Stormis  a conventionally designed and powered research vessel, but scientists on board used the non-extractive AUV to examine the fault.

The research on the NSAF was sponsored by NOAA’s Office of Ocean Exploration and Research, the California Seafloor Mapping Program, and the U.S. Geological Survey. The expedition ran from September 5 to October 4.

Last updated by Northwest Fisheries Science Center on May 19, 2021