Dangerous Fishing May Be Endangered

A new study of fishing practices found that the "risky" behavior that makes fishing one of the most dangerous lines of work dropped sharply following the adoption of catch shares management in the West Coast fixed gear sablefish fishery. 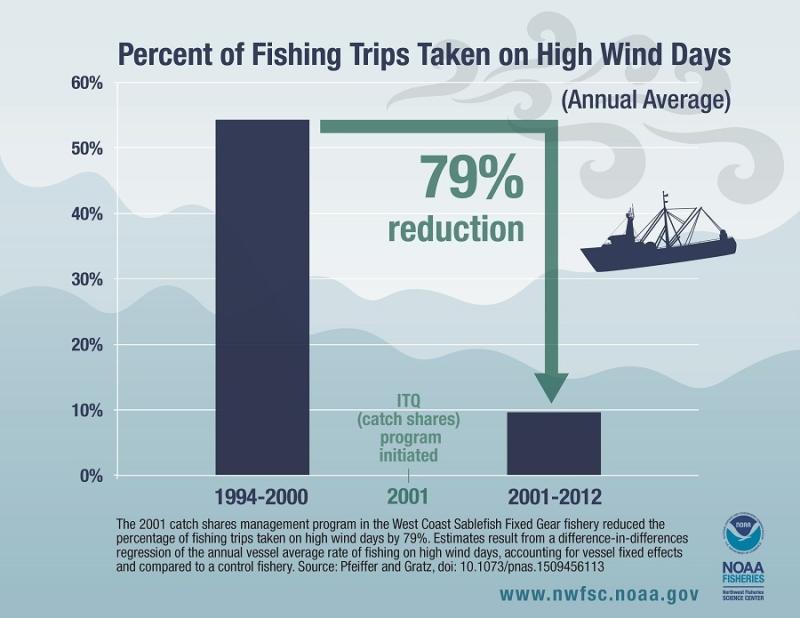 Catch shares, a form of "rights-based" fisheries management adopted for several fisheries in the Pacific Northwest, may put an end to the kind of daring exploits chronicled in the Deadliest Catch.

A new study of fishing practices found that the "risky" behavior that makes fishing one of the most dangerous lines of work dropped sharply following the adoption of catch shares management in the West Coast fixed gear sablefish fishery. Fewer boats fished during the stormiest weather, with fishing on the highest wind days dropping by 79 percent under catch shares, according to the research published today in the Proceedings of the National Academy of Sciences.

Indeed, the safer practices corresponded with an 87 percent reduction in the rate of safety incidents the U.S. Coast Guard reported for the sablefish fishery before and after catch shares went into effect.

While fishermen may be known as adventurous risk-takers, the researchers said that traditional fisheries rules promote risky behavior by requiring vessels to compete with each other to catch as much as possible in a limited season.

"Fishermen have the incentive to participate in around-the-clock fishing in all weather conditions, overload their vessels, and ignore maintenance problems to maximize catch," the scientists write. "These behaviors contribute considerably to the dangerous nature of commercial fishing."

NOAA Fisheries' 2001 adoption of catch shares for sablefish changed the incentives around the fishery by giving each vessel rights to a specific share of the allowable catch. Vessels could then choose how and when to fish for their share.

The purpose was to reduce competitive fishing pressure on overfished stocks. But the change also freed fishermen from the traditional, "derby"-style race to catch fish as fast as possible, which could lead fishing vessels to go to sea even in stormy and dangerous conditions.

Severe weather contributed to about four of every five fatal fishing vessel accidents on the West Coast from 2000 to 2009. Commercial fishing remains dangerous, with an annual average fatality rate 30 times the U.S. average.

"When fishermen have to compete for fish they can't make a rational tradeoff in terms of safety," Pfeiffer said. "Any delay, whether it's because of the weather or any other reason, results in the fish being taken by someone else."

"Catch shares provides the flexibility for the fishermen to make a rational tradeoff in terms of risk and reward, instead of being compelled to fish whatever the conditions," Pfeiffer said.

The safety benefits observed in the sablefish fishery could also be expected in other fisheries managed through catch shares, the researchers concluded. They said "rights-based" management such as catch shares resolves "many of the problems associated with the competitive race to fish experienced in fisheries around the world."

NOAA Fisheries has since expanded catch shares management to other West Coast fisheries, including the groundfish fishery in 2011.

The study was the first to identify how fisheries management can alter the risk-taking behavior of fishermen by changing the economic incentives that drive their decisions. "Catch shares change fishing incentives such that fishermen themselves decide to expose themselves to less risk," the researchers write.