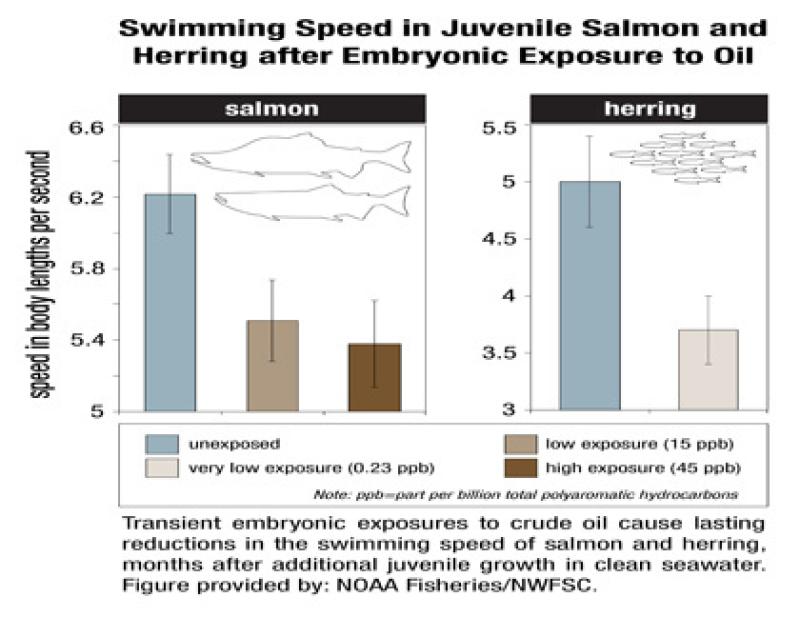 The herring population crashed four years after the spill in Prince William Sound and pink salmon stocks also declined, but the link to the oil spill has remained controversial. The new findings published in the online journal Scientific Reports suggest that the delayed effects of the spill may have been important contributors to the declines.

“These juvenile fish on the outside look completely normal, but their hearts are not functioning properly and that translates directly into reduced swimming ability and reduced survival,” said John Incardona, a research toxicologist at NOAA Fisheries’ Northwest Fisheries Science Center in Seattle. “In terms of impacts to shore-spawning fish, the oil spill likely had a much bigger footprint than anyone realized.”

“Our findings are changing the picture in terms of assessing the risk and the potential impacts of oil spills,” said Nat Scholz, leader of the NWFSC’s ecotoxicology program and a coauthor of the new study. “We now know the developing fish heart is exquisitely sensitive to crude oil toxicity, and that subtle changes in heart formation can have delayed but important consequences for first-year survival, which in turn determines the long-term abundance of wild fish populations.”

Scientists from the Northwest Fisheries Science Center and Alaska Fisheries Science Center temporarily exposed embryonic salmon and herring to low levels of crude oil from the North Slope of Alaska and found that both absorbed chemicals at similar concentrations in their tissues. The embryos were then transferred to clean seawater and raised as juvenile fish for seven to eight months.

Few of the exposed embryos or larvae were outwardly abnormal in any way. However, closer examination of the fish revealed subtle defects that could reduce their long-term survival:

“With this very early impact on the heart, you end up with an animal that just can’t pump blood through its body as well, which means it can’t swim as well to capture food, form schools, or migrate,” said Mark Carls, toxicologist at the Alaska Fisheries Science Center. “Crude oil is changing basic physiology, or what makes a fish a fish.”

Scientists reviewed data on measured oil concentrations in surface water samples collected in Prince William Sound after the oil spill and during the 1989 herring spawning season. Most of the 233 samples contained less oil than was believed to be toxic to herring at the time, based on gross developmental abnormalities. However, nearly all of the samples contained oil at or above concentrations shown in the new study to alter heart development.

If the Exxon Valdez spill impacted heart development among a large majority of fish that were spawned in proximity to oiled shorelines, the subsequent losses of juveniles to delayed mortality would have left fewer adults to join the population. Although not direct proof, this provides a plausible explanation for the collapse of the Prince William Sound herring stock four years later, when fish spawned during the oil spill would have matured.

The study concludes that the impacts of the Exxon Valdez spill on nearshore spawning populations of fish are likely to have been considerably underestimated in terms of both the geographic extent of affected habitat and the lingering toxicity of low levels of oil. The findings will likely contribute to more accurate assessments of the impacts of future oil spills, Incardona said. “Now we have a much better idea of what we should be looking for,” he said.