Chinook play a major role as Southern Resident Prey across all seasons. 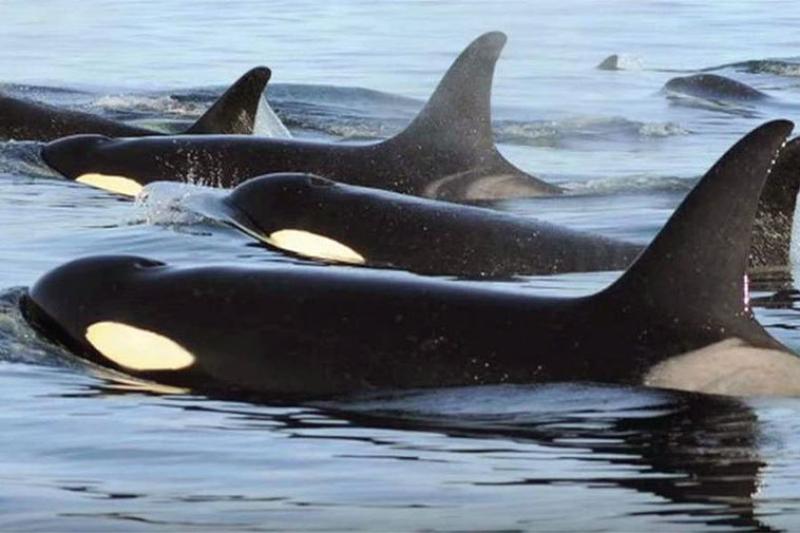 Endangered Southern Resident killer whales prey on a diversity of Chinook and other salmon. The stocks come from an enormous geographic range as far north as Alaska and as far south as California’s Central Valley, a new analysis shows.

The diverse salmon stocks each have their own migration patterns and timing. They combine to provide the whales with a “portfolio” of prey that supports them across the entire year. The catch is that many of the salmon stocks are at risk themselves.

“If returns to the Fraser River are in trouble, and Columbia River returns are strong, then prey availability to the whales potentially balances out as the whales have evolved to move rapidly throughout their range,” said NOAA Fisheries wildlife biologist Brad Hanson, lead author of the new research. “But if most of the stocks throughout their range are reduced then this could spell trouble for the whales.”

The researchers examined more than 150 prey and fecal samples collected from the whales from 2004 to 2017. This produced the most comprehensive picture yet of Southern Resident prey over the course of the year. 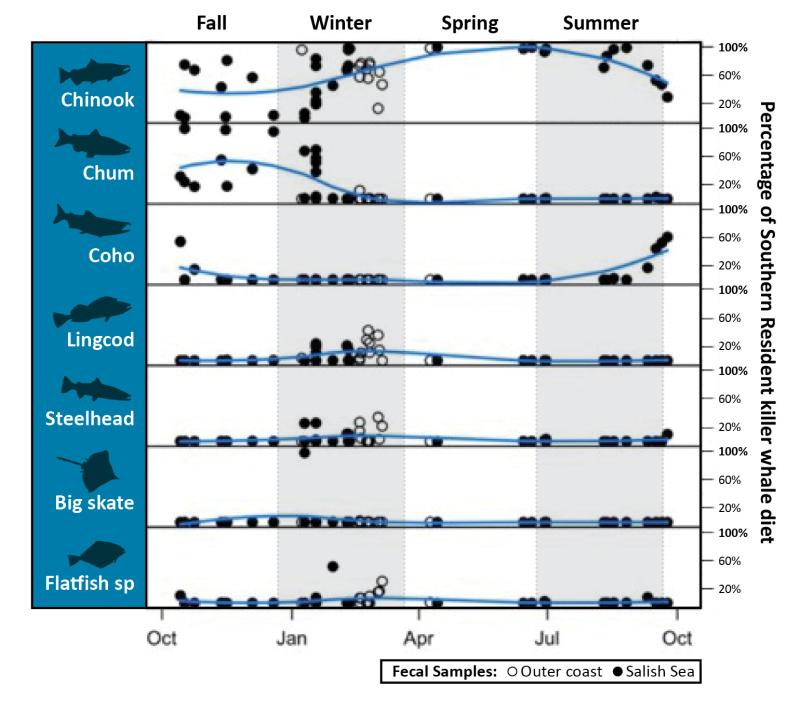 “When so many prey species are endangered, then they lose some of that diversity,” Hanson said. “The question for managers is how do you support and improve this diverse portfolio of species and stocks.”

The analysis also revealed that the whales prey almost exclusively on Chinook salmon when they are available in the summer. However, they diversify their diet the rest of the year to include species such as skates, halibut, and lingcod, as well as steelhead, chum, and coho salmon. Most of the salmon the whales consume in winter and spring come from three large river systems: the Columbia, Sacramento, and rivers entering Puget Sound.

The researchers note that increased production of hatchery fish could help support the 75 remaining whales, but that this strategy is not without risks.

Many hatchery fish are already available at certain times of the year, said Robin Baird, a research biologist at Cascadia Research Collective and a coauthor of the study. Increasing the diversity of hatchery stocks to include stocks that inhabit the whales’ range in winter, when they appear to have less food, may be most helpful.

“We don’t need more cookie-cutter fish that all come back during the time when Chinook are most abundant; we need to diversify and increase availability at other times of the year,” Baird said.

Additional funding was provided through the federal Pacific Salmon Commission and the Washington State Legislature. The funding paid for the release of more than 11.6 million additional hatchery-origin Chinook salmon in 2020, compared to previous years. It will also pay for more than 18.3 million additional fish in 2021.

In line with the findings, the hatchery production will help maintain the portfolio of stocks, including those that overlap with the killer whales during the lean times of winter. Biologists also manage the production to avoid risk to naturally produced salmon.

The Southern Residents have historically spent much of the summer in the inland waters of the Salish Sea. There they feed almost exclusively on Chinook salmon from the Fraser River and the Skagit, Snohomish, and other rivers entering Puget Sound. In the late summer, fall and early winter, they also turn to coho and chum salmon as Chinook decline in number.

Two of the three pods—K and L pods—typically move to the outer coast in fall and winter. There they spend much of their time feeding off the Washington coast, with forays south as far as Monterey Bay in California. They likely concentrate near the Columbia River area because of the large number of returning salmon, heavily supplemented by hatchery fish, the scientists said.

They also diversify their diet with salmon from potentially as far away as the Taku River in Alaska and other species. Those fish comprise a larger share of the whales’ diet than scientists first thought based on observations of the whales feeding at the surface. Biologists collected fecal samples from the whales while tracking them along the coast. The samples revealed the more complete picture, including the ocean species they consume underwater and out of sight.

The third pod, J pod, spends more time in inland waters while also traveling along the west coast of Vancouver Island. There they access a mix of salmon traveling a kind of superhighway south to West Coast rivers.

The Southern Resident J-pod that forages to the north of the other two pods may also benefit from the same earlier access. J-pod has had a greater reproductive rate than the other pods, the study notes.

Chinook salmon are also shrinking over time along the entire West Coast, and other predators may also play a role.

"The net result is that the consistent consumption of these smaller fish, which have a lower caloric value, may pose an additional challenge to the [Southern Resident killer whale] population's ability to meet their energetic needs," the scientists wrote.

NOAA Fisheries has designated the Southern Residents one of nine national Species in the Spotlight. These species are highly endangered and can benefit from focused recovery efforts, including conservation of their prey. NOAA Fisheries West Coast Region has already applied the prey study findings in its proposal to expand critical habitat for the Southern Residents along the West Coast.

Authors of the research include scientists from: