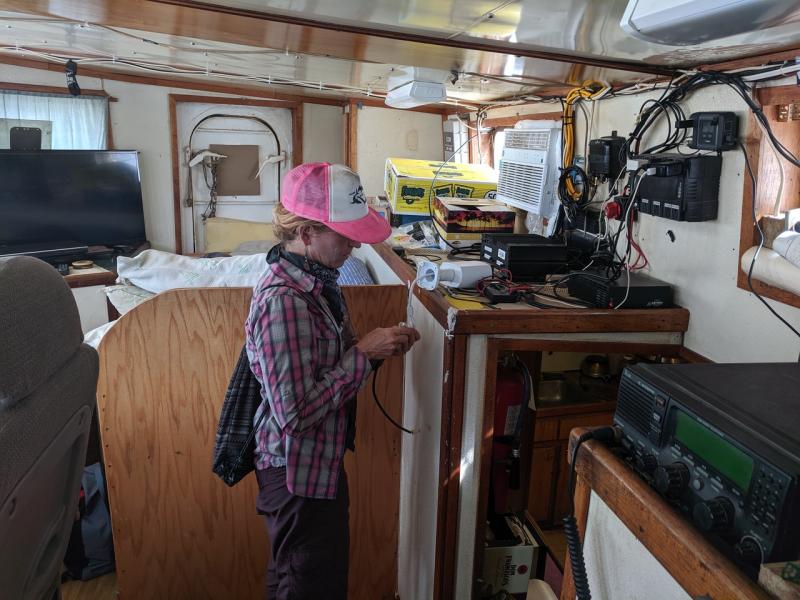 In this particular study, trained EM video reviewers were able to identify 99 percent of all retained fish species. They also identified 100 percent of false killer whales and sea turtles with which the longline fisheries interacted. The study also showed that the optimal review speed was eight times faster than real time. Four times faster proved to be too slow for reviewers to maintain focus, and 16 times was too fast to catch all interactions.

“EM works really well, is accurate for species of interest, and is a good tool for monitoring and recording interactions with protected species,” says Matthew Carnes, Fisheries Electronic Monitoring Associate with the Joint Institute for Marine and Atmospheric Research. “In the over 330 hauls we’ve monitored at 8-times speed, the reviewers didn’t miss any of the four marine mammals or seven sea turtle interactions.”

Equally important, voluntary industry participants support the EM deployment. “The Hawaii Longline Association has been supportive of EM technology since testing began on Hawaii longline vessels in 2010. We’re looking forward to seeing how it works to supplement observer coverage, recognizing that it can be used to monitor protected species interactions,” says Eric Kingma, Executive Director of the Hawaii Longline Association. There is currently 100 percent observer coverage in the Hawaii shallow-set fishery targeting swordfish and 20 percent coverage in the Hawaii deep-set fishery targeting bigeye tuna.

The project is supported via a competitive funding program through NOAA’s Fisheries Information System Program. This includes funding from the National Observer Program's Electronic Technologies program and the National Catch Share Program. 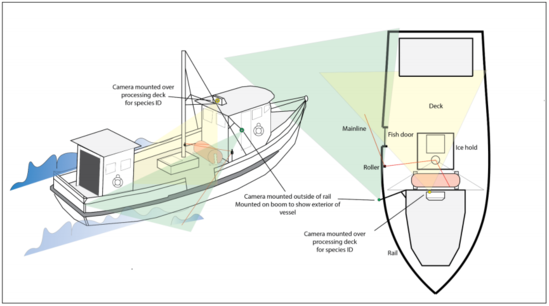 Since 2017, 18 EM systems have been installed on Pacific Island longline vessels. Two cameras on each vessel are connected to sensors on the boat’s hydraulic and reel systems. When the reel starts spinning, the cameras start recording. The hydraulic sensor reveals information about the vessel’s speed and hydraulic pressure. This data can later be used to see when fishing occurred during an 18- to 24-day trip, half of which is dedicated to reaching and returning from the fishing grounds.

“That’s an advantage to EM—it’s much more efficient and cost effective to start observing when fishing happens. There are clear gains in monitoring efficiency,” says Kingma. “It also benefits operators who are navigating the vessel. During a haul, they’re able to see the deck on the video feed while driving the boat.”

Once the vessel returns to port, footage from the cameras is reviewed at the Pacific Islands Fisheries Science Center by trained staff. Results are compared to what onboard fishery observers record when they are on EM-equipped boats.

“We don’t expect EM to fully replace the observer program, but it will likely be an additional data stream to supplement their data collection,” says Jennifer Stahl, a JIMAR Fisheries Monitoring Associate.

Kingma agrees: “Human observers collect important biological data on the water, assist with tagging, and are able to communicate with captains and crew about protected species handling guidelines.”

One of the hallmarks of the program is collaboration between scientists—who check in with captains at the end of every trip—and the captains. They can have the cameras removed from their boats at any time. “It’s a conversation. We try to involve captains in the decision-making process as much as possible and I think that is a big part of the success,” says Carnes.

“Our industry has a long history of cooperative research,” notes Kingma. “Even with low levels of interactions, protected species are a prominent issue in the management of our longline fisheries. If EM systems can effectively monitor target and non-target catch and protected species interactions, then it likely has a future in our fisheries,” he says. “However, concerns still remain about the costs of EM systems, including data storage and review.”

The next step for the program is to create a steering committee of scientists, captains, and stakeholders to help lead  the project through implementation. A NOAA technical memo and data report have been published as guiding documents applying lessons learned during the project to the implementation plan.

“As we continue to find new and better ways to improve electronic monitoring,” Carnes says, “ultimately we can improve on things like detecting bycatch.”

An aerial image of the reticulated coral reefs referred to as the “maze” at Manawai (Pearl and Hermes Atoll), a high-density debris accumulation hotspot. Credit: NOAA Fisheries/Steven Gnam.
Feature Story

An endangered Hawaiian monk seal takes a nap on the beach on the south coast of Kaua‘i, Hawai‘i. The sign in the foreground instructs people not to approach the seal.
More News

Last updated by Office of Science and Technology on June 23, 2020