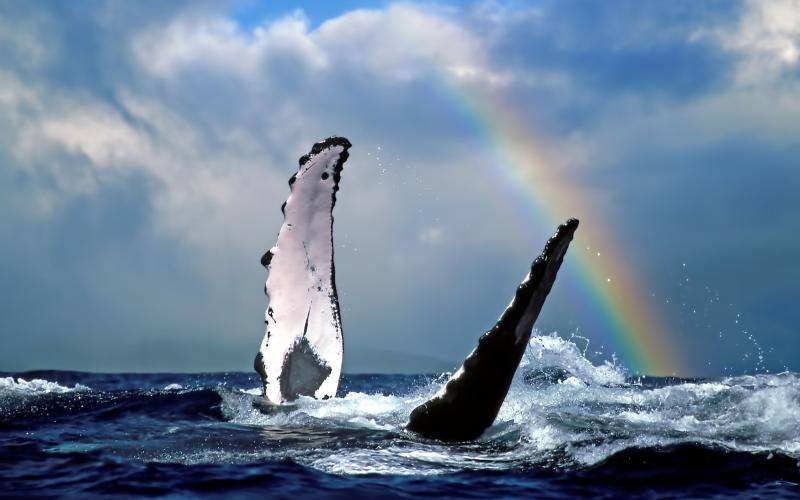 Whales astonish us. Witnessing their behaviors has inspired careers in marine biology and energized action for ocean conservation. Many NOAA Fisheries scientists have had unique opportunities to spend time on and in the ocean, studying marine mammals like whales in their habitats. To celebrate Whale Week 2022 and World Whale Day, we asked our staff to recall a favorite moment with these incredible and majestic creatures. Read their personal recollections below.

A Chorus of Humpbacks

“In 2015, I joined my officemate and good friend Eric Keen on his sailboat, Bangarang, in the fjords of British Columbia. We were both graduate students at Scripps Institution of Oceanography in San Diego. Eric was in the fjords studying whales, krill, and seabirds in close collaboration with the Gitga’at First Nation and the NPO North Coast Cetacean Society.

One day we came across a group of bubble-net feeding humpbacks, so we turned off the engine, dropped the hydrophone in the water to listen. The whales would dive together, and then begin a chorus of trumpeting calls to coordinate their movement, spiraling from the depths toward the surface together. At the same time, they were blowing bubbles (to create a bubble net) to trap fish to eat. The rhythm of the trumpeting grew faster and louder before all at once—SPLASH! They burst through the surface with their giant mouths open, engulfing their prey, and then grunting and groaning with what we could only imagine was delight. Then the cycle would begin all over again. From a distance, we observed this majestic spectacle of nature for a couple of hours. Then they decided to change locations, which resulted in the closest humpback encounter of my life.”

See the bubble-net feeding humpbacks Anne saw that day, check out in this video.

“One of my most memorable encounters with a whale was my first interaction with killer whales in the Pacific Northwest in 2002. I was working for NOAA Fisheries Office of Protected Resources in Silver Spring, Maryland. I volunteered to head out to Seattle to help rescue an orphan killer whale calf in Puget Sound. The killer whale calf was a Northern Resident known as Springer, who was separated from her family group. For the next few weeks I helped prepare for the rescue and then was onsite once we had Springer in an enclosure at NOAA’s Manchester Laboratory. I supported the animal care team as they gave her a thorough check up and made sure she could return to her family. We did our best to keep our distance when providing live salmon for her to eat, administering medication, or observing her behavior, so she would not get used to people. We used remote cameras except during key medical exams when her veterinarians and care team were taking crucial samples.

It was not until her final day in our care that I really met Springer face to face. On the journey back to her home waters in British Columbia, Canada I helped the team monitor her breathing. I recorded her respirations, kept her wet, and got a chance to hear her vocalizing. I’ve come to realize how special it was to see her up close and personal. I’ve spent years helping educate boaters about keeping their distance and following Be Whale Wise guidelines and regulations to support recovery of both Northern and Southern Resident killer whales.”

Lynne Barre is NOAA Fisheries' West Coast Region Southern Resident Killer Whale Recovery Coordinator. To learn more about the story of Springer and her successful rescue and reintegration with her family, watch Telling the Story of Springer, a presentation and panel discussion in partnership with the National Marine Sanctuaries webinar series.

Observer Sightings of the Hyperoodon

“Thanksgiving Day in 1989 on board the NOAA Ship McArthur. I was a marine mammal observer on this 4-month cruise in the Eastern Tropical Pacific. It was my second cruise ever. Back in the day, there were mysterious sightings near the equator of an unknown beaked whale that was tentatively being called “Hyperoodon,” or southern bottlenose whale, for lack of better ideas. No one actually knew what they were, but Bob Pitman had seen them enough times to suspect they were not the Hyperoodon planifrons familiar in Southern Oceans. But when you don't know, you tend to make up reasons: "They must be southern bottlenose whales that are migrating up towards the equator..." I was napping in between watches on the 25-power binoculars, because that's what you did before the internet was invented when you weren't searching for marine mammals. You napped, had a second lunch, or played cribbage with shipmates. Two out of three of these activities were simultaneously possible.

Suddenly another observer, Rick LeDuc, appeared in my dream, yelling at me to get on the flying bridge ASAP. But it wasn't a dream—Rick was actually in my room now, saying they had a “Hyperoodon” sighting and I needed to get up there immediately before the animals dove. I got to see them! Maybe a dozen animals, with a group of pilot whales in attendance. People were literally screaming. It was a big deal for Rick to come get me, as he knew I'd never seen this mystery species before and he was sacrificing precious time to roust me. Today, all the observers have walkie-talkies, so it's easier to get everyone involved in rare sightings.

Many years later, with additional sightings, more thought, and the development of genetic methods, this “Hyperoodon” species was confirmed to be Indopacetus pacificus, now known as the tropical bottlenose whale or Longman’s beaked whale.”

“In July 2016, I had the opportunity to accompany the Washington Department of Fish and Wildlife Enforcement on a Southern Resident killer whale patrol in the San Juan Islands. While we were out on the water we encountered J & L pods and a mom/calf pair swam right by our patrol vessel (engine turned off of course!). It was an exciting opportunity to see the whales up close without disturbing them. And, it was a wonderful reminder of why I have dedicated my career to protecting marine mammals in the Pacific Northwest.” Kristin Wilkinson is the Regional Stranding Coordinator for NOAA Fisheries and oversees the West Coast Marine Mammal Stranding Network in Washington and Oregon. Read more about Kristin’s career and work with NOAA Fisheries.

“During NOAA marine mammal stock assessment surveys, the whale species that scientists and crew new to such surveys usually want to see more than any other is the iconic sperm whale. Like most whales, sperm whales typically don’t stay long at the water’s surface if a ship is nearby. When the call is made from the science team working on deck to those below that sperm whale(s) have been sighted, by the time people get on deck the whales often have dived. But in 2014, during the NOAA “CalCurCEAS” survey, a small sperm whale calf and its mother stayed at the surface near the ship for 30 minutes. This was long enough for many people to reach the deck and get a good look at not only the calf, but the mother and other sperm whales in the extended group. Young animals can be curious about ships and will swim alongside, seemingly investigating the ship and even making eye contact with the humans watching them. Two mammal species watching each other! Often mothers are patient with this behavior, at least for a short time. Such was the case on this day, much to the enjoyment of all.”

“I’ve been interested in marine mammals ever since I was 8 years old. During my senior year as a biology undergraduate student, I got an internship at the National Aquarium in Baltimore. There, I worked closely with the marine mammal trainers and dolphins, and I got to feed one of the harbor seals that was assigned to me.

Little did I know that the aquarium would be the home of my most memorable experience with a whale, one that would change the trajectory of my life. Because in addition to working with the animal trainers, I also got to work on marine mammal rehabilitation efforts, including swimming with and feeding the famous pygmy sperm whale, Inky. Inky had been stranded off the New Jersey coast on Thanksgiving Day in 1993 before she was airlifted and trucked to our aquarium. Her belly was full of marine debris, including plastic from balloons and garbage bags, and her condition was pretty dire. Up until working with Inky, I thought I wanted to be a marine mammal trainer. Inky’s struggle for survival and my first-hand experience in helping rehabilitate her were key moments. They helped me realize I wanted to be a scientist that studies dolphins and works towards conservation efforts.

I'm still studying dolphins like I dreamed about since I was eight—the largest dolphin in the world, no less. Killer whales present their own challenges, as they are an endangered species and difficult to study in the wild. I’m continually trying to try to figure out ways to learn more about their physiology and apply those findings to Southern Resident killer whale conservation efforts. It is rewarding to know that the aspirations I had while working with Inky in my early 20s are now a reality.” Dawn Noren is a physiological ecologist with the NOAA Fisheries' Northwest Fisheries Science Center. She currently focuses her research on the behavior and energetics of endangered Southern Resident killer whales. She has also studied how much food killer whales need to eat, killer whale morphology and what it tells us about their health, and how female killer whales pass contaminants to their calves during pregnancy and nursing.