The release of thousands of juvenile Central California Coast coho salmon in a coastal creek north of Santa Cruz will boost the chances of recovering this endangered fish. 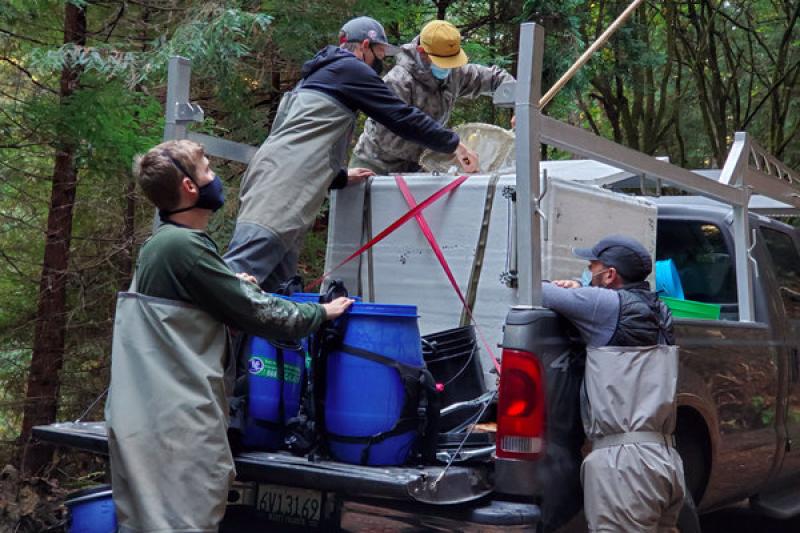 After years of habitat restoration, in collaboration with local landowners, 10,000 juvenile coho salmon were released into Pescadero Creek in northern California in November 2020.

Central California Coast (CCC) coho salmon were once abundant from Mendocino County to Santa Cruz County. They were listed as endangered in 2005 and have since fallen to critically low levels.

NOAA Fisheries named CCC coho salmon as a Species in the Spotlight in 2015. This initiative highlights nine species under NOAA Fisheries’ jurisdiction that are most at risk of extinction. Healthy salmon populations provide economic and social benefits; communities, businesses, jobs, and cultures revolve around the salmon of California.

“Bringing coho back to the Pescadero watershed is a priority for our agency, and was possible, because extraordinary work has been done to restore their habitat,” said Joel Casagrande, Fisheries Biologist for NOAA Fisheries’ West Coast Region. “Also, now there is a critical mass of support from partners and landowners in the watershed who are helping in the effort.”

The released fish came from a conservation hatchery program in Santa Cruz County. The program is a partnership between the Monterey Bay Salmon and Trout Project, University of California at Santa Cruz, and NOAA Fisheries’ Southwest Fisheries Science Center. Its goal is to restore this imperiled salmon population and to protect and increase CCC coho’s genetic diversity throughout their historic range.

When released, the coho are less than a year old and approximately two inches long. They will grow another three inches in the creek before they migrate out to the ocean. After maturing in the ocean and growing longer than two feet, the surviving adults will return to freshwater streams to spawn. Coho return to streams where they spent time as juveniles, typically completing the cycle after three years.

Another partnership effort was launched to orchestrate the successful release of juvenile CCC coho into Pescadero Creek, including: 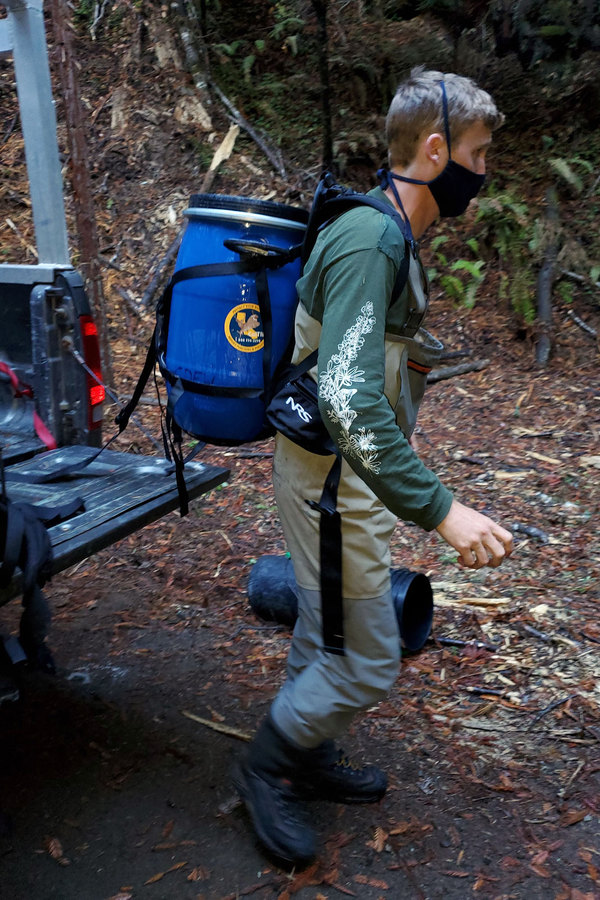 “Despite challenges and setbacks, including a wildfire in the area that nearly burned down the hatchery itself, we were able to save the salmon. That makes today’s release of the coho even more of a success,” said Casagrande.

To place the juvenile coho salmon in the creek, scientists hiked into the watershed carrying the fish in backpacks that resemble barrels. These special backpacks allow for the transport and release of the tiny coho into the creek and its tributaries, where they will continue growing.

CCC coho salmon are accustomed to swimming against the current, although they have been dealt a hard hand over the last few decades. They were once abundant in coastal streams from Punta Gorda, California, to the Santa Cruz area. The species has suffered from habitat degradation throughout its native coastal watersheds. Wildfires, floods, drought, and extreme storms have also contributed to their decline.

Studies estimate that out of the 10,000 juvenile salmon released, just 2 percent, or only 200, are likely to survive and return as adults to spawn. Still, that is an important step toward recovering a robust coho salmon population in their native waters.

The NOAA Fisheries recovery plan for CCC coho calls for conservation hatchery releases of the coho to help reintroduce their populations to their historical streams.

Biologists will track survival of the released coho. The fish are tagged so that a stationary antenna in Pescadero Creek can detect them as they migrate towards the ocean next spring and when they eventually return as adults. This type of monitoring is important for evaluating the success of this project.

“It’s an encouraging step on the long road to recovery of this endangered species,” said David Hines, Coho Salmon Recovery Coordinator with the California Department of Fish and Wildlife.

These types of partnerships and science support CCC coho’s resilience and boost their chances of once again re-establishing a thriving wild run in Pescadero Creek.