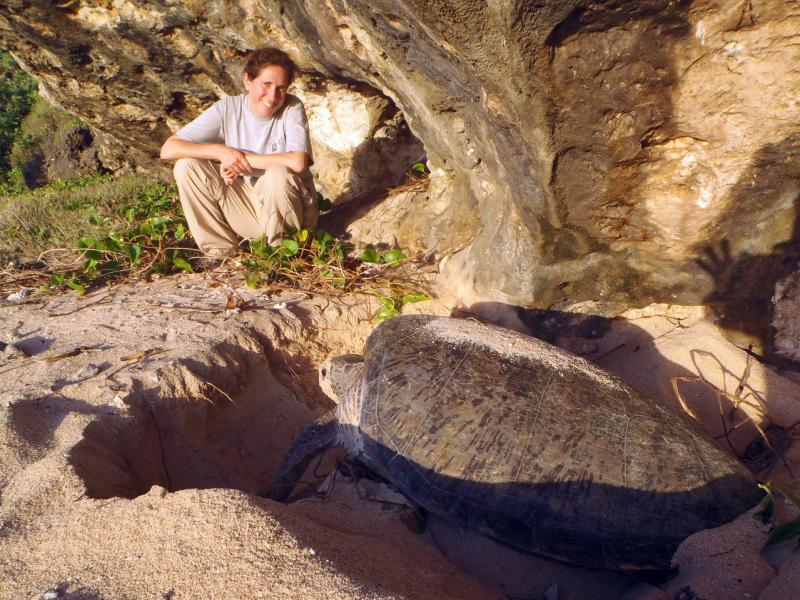 In the Northern Mariana Islands, scientists recently found that the removal of reproductive females has decreased the population growth rate and is therefore delaying full recovery of the nesting green turtle population. The impacts of removing nesting females from the population will be further exacerbated as nest temperatures reach turning points that produce more females and increase embryonic death. Facing these life threats at both the hatchling and adult stages could possibly offset the gains in abundance for a population that has been increasing at 7.4% annually. 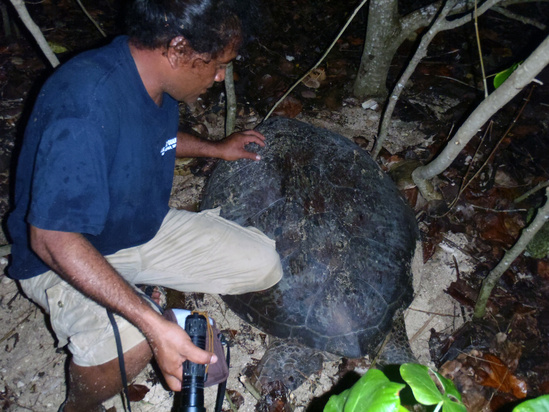 Jessy Hapdei, CNMI Department of Lands and Natural Resources staff, waits for a green turtle to finish covering her clutch before carefully measuring and tagging her during a survey on a nesting beach in Saipan (Photo courtesy of Tammy Summers).

For 11 years, local research partners in the Commonwealth of the Northern Mariana Islands surveyed beaches to collect data on green turtles and their nests. Now, for the first time, scientists have analyzed this incredible data set to better understand the previously unstudied population, their nesting environment, and current threats. The study was completed by a consortium of regional partners: the CNMI Department of Lands and Natural Resources, Rainbow Connection Research, NOAA’s Pacific Islands Fisheries Science Center, and NOAA’s Pacific Islands Regional Office. It provides the first comprehensive assessment of a nesting green turtle population in the Mariana Islands, a remote archipelago of Micronesia. 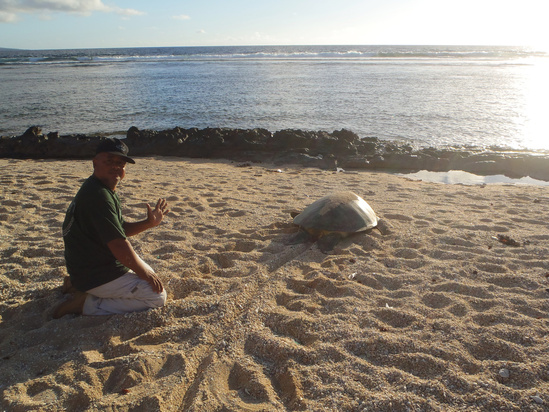 While this study provides valuable insights to a previously unstudied population, and supports recent findings from other regions where temperature-induced feminization of sea turtle populations has occurred, it has also laid the foundation for future conservation strategies. Recovery of this endangered sea turtle population will require continued partnerships among local and federal government, scientific researchers, managers, and educators. Importantly, these partnerships are also fostering environmental stewardship in the youth of local communities, a phenomenon captured by the award-winning short film “My Haggan Dream” about a girl from Saipan on a quest to learn more about her island’s precious turtles.