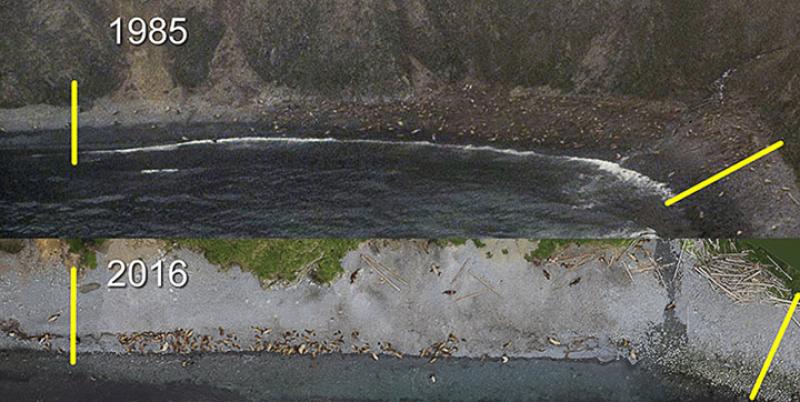 But Steller sea lions living in the western Aleutians have “continued to decline west of Samalga Pass to Attu Island,” according to Center research biologist Katie Sweeney. Center scientists along with biologists from the state of Alaska and Russia don’t know why.

The decline in abundance in the western Aleutians is alarming with a 94 percent decrease in the last 30 years.

What We Know and Actions Taken

Research and management actions NOAA Fisheries and partners have taken since 1990 have made positive impacts to Steller sea lion numbers in other areas. The Eastern Stock had been listed as threatened under the Endangered Species Act since 1990 before rebounding and being delisted in 2013.

One of the most influential actions was ending a fishing practice that kept hundreds of tons of freshly caught fish semi-enclosed at the surface, awaiting processing. The net full of fish would attract Steller sea lions; the animals would swim inside for a free feed. Then, when the processing ship came, the net was closed. Before the practice was phased out in the mid-1980s, scientists estimate thousands of sea lions would be trapped and killed inside nets each year, which also affected pup populations. If a mother was killed at sea, the pup would die of starvation.

Meanwhile, scientists at the Alaska Department of Fish and Game led investigations into whether the animals were dying of disease. “ADFG and NOAA Fisheries scanned for a wide variety of pinniped diseases and nothing came back as a significant contributor to the decline," said Fritz.

The declines also prompted Center scientists to begin permanently marking some pups to better track individual animals throughout their lives. One of the many benefits is that researchers know the animals from the western Aleutians aren’t simply moving east where populations are increasing. For the most part, Steller sea lions are staying put.

What’s more, Center scientists have also been collecting a vast amount of genetic samples from both stocks for several years. DNA analysis shows very little interbreeding. “And even if they were moving, that would still indicate that there was a problem with that area,” Sweeney said.

What Still Needs to be Researched

The unknown research topics that could be key to stopping declines are distinct but possibly linked. One theory is that there is some kind of food supply shortage causing nutritional stress, leading to a slew of chain reactions.

For instance, female Steller sea lions care for pups much longer than many other pinniped species. “They’re good moms,” said Sweeney. In fact, a nursing pup may not wean for years. That’s in stark contrast to northern fur seal and harbor seal pups. They are weaned months after birth.

The question researchers are asking now: Is high maternal investment leading to decreased births and subsequent decreases in recruitment in the western Aleutians?

“We see pups and the pups seem fat and healthy and the moms seem fat and healthy,” Fritz said. “Survival rates are pretty good. They are surviving until age two at the same rates where they are increasing. We just see way fewer pups. In Attu, we now only see 30 or 40 pups born each year, while back in the late 1970s it was more than 600.”

But if females in the west are putting extra effort into rearing pups at the expense of giving birth to another one, why?

Some clues might be coming from specially-designed cameras scientists built to withstand harsh Aleutian weather and sea lion curiosity. The remote cameras take images year-round at Steller sea lion breeding sites. Some photos have shown pups being born, dying and then eventually being washed out to sea or being inadvertently buried by rocks before researchers conducting surveys arrive on boat or fly over.

Scientists question whether newborn pups are not surviving because females are not able to consume enough food to grow a healthy new pup. In turn, females could be continuing to nurse older pups longer.

Then there’s the possibility of contamination. “In the research conducted in the last seven to eight years we’ve seen high levels of mercury. But we don’t know if that was recent, was that always there?” Fritz asked. Plus, “the [mercury] hotspots don’t match the declines,” added Sweeney.

Further research is critical to determining what’s really behind this continued decline and initiate recovery.

Center scientists work every year to gather new information through a research survey along the Aleutians, assessing populations and photographing animals by taking small boats to islands and more recently using hexacopter drones to access difficult to reach sites. They also coordinate with other NOAA researchers who take to the sky to photograph breeding and resting locations.

Then there are the remote cameras capturing pictures year-round. The cameras are already offering insights but they produced 380,000 images this year alone, far too many for our team to examine given other responsibilities. But a new project to crowdsource and train citizen scientists to help review the images is underway and will be launched next year.

The lingering questions mean a lot more work to understand what is happening in this location. Ultimately the science we are conducting will help inform future management decisions to protect Steller sea lions and ensure they don’t disappear from locations that could be vital to the entire Western Stock.