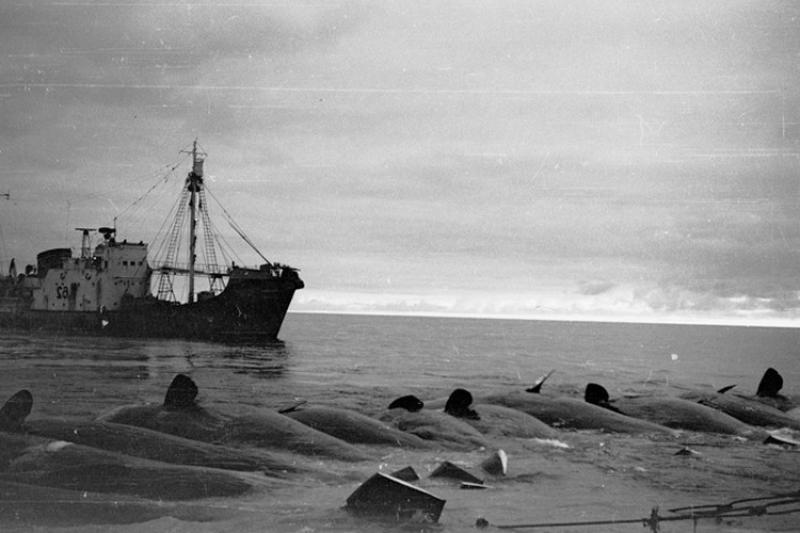 A recently published journal article co-authored by NOAA Fisheries scientists Phil Clapham and Yulia  Ivashchenko is providing new insights into the extent of industrial whaling.  Clapham and Ivashchenko worked with Robert Rocha, director of Science Programs at the New Bedford Whaling Museum in Massachusetts, to produce the first global estimate of the number of whales killed by industrial hunts in the 20th century – an astounding 3 million whales.
“A key challenge in producing this estimate was to find reliable records documenting actual catches in places like the North Pacific,” said Clapham. “This was especially needed for the former Soviet Union, which is known to have conducted extensive illegal whaling after World War II.” The backstory on how NOAA Fisheries scientists came across the documentation they needed to start to fill in the data gaps would be the basis for a good crime novel.  In 1993, Robert Brownell, a research biologist at NOAA Fisheries Southwest Fisheries Science Center, had conversations with Alexei Yablokov, science advisor to then-Prime Minister Boris Yeltsin, who revealed that the Soviet Union had underreported their whale catches.  Brownell enlisted the help of former Soviet whale biologists to summarize the true catch data.  He subsequently brought in Clapham and eventually Ivashchenko, and it was Ivashchenko who corrected the North Pacific catch record.

After nearly 20 years of research, Ivashchenko and Clapham are still uncovering new information that helps illuminate the full extent of the illegal Soviet industrial whaling activities, and the impact it has had on whale populations worldwide. Ivashchenko, a native Russian speaker, has conducted interviews with former Soviet biologists who secretly kept copies of governmental whaling records. She has also made frequent trips to Russia, including to archives in Vladivostok (home port for the Soviet Pacific whaling fleets).  There she collected scores of scientific and other reports made public after the end of the Cold War.  Her recent research reveals that the number of North Pacific right whales taken by  the Soviet Union was 762 in contrast to the 11 reported to the International Whale Commission, which maintains the worldwide database on whale catches.

In 2012, NOAA scientists estimated that there were only about 30 right whales remaining in the eastern North Pacific, making this the world’s smallest and most critically endangered whale population.

Emptying the Oceans: A Summary of Industrial Whaling Catches in the 20th Century