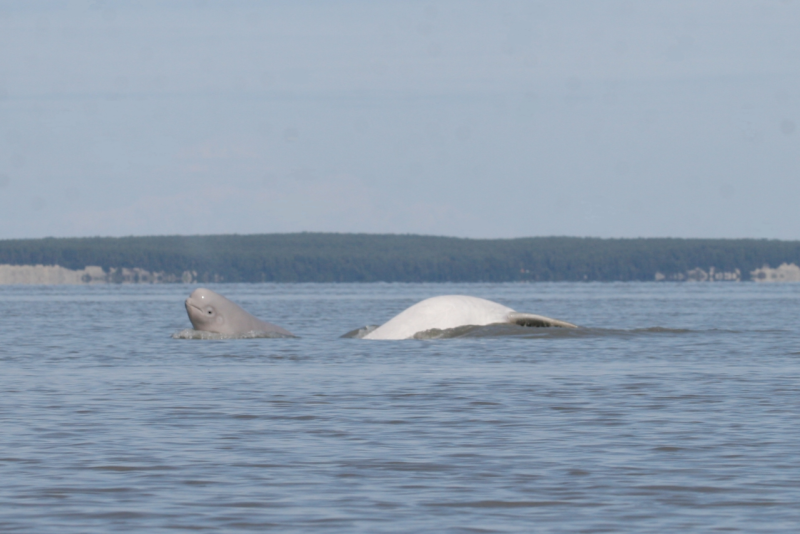 This knowledge is critical for understanding and managing potential threats impeding recovery of this endangered population.

“Cook Inlet belugas were listed as endangered in 2008. Despite protective measures, the population continued to decline,” said Manuel Castellote, NOAA Fisheries affiliate/University of Washington/Joint Institute for the Study of the Atmosphere and Ocean biologist who led the study. “We undertook this study to provide information that managers needed to develop an effective recovery strategy.”

Castellote worked in partnership with the Alaska Department of Fish and Game to develop a passive acoustic monitoring program. It recorded beluga movements and foraging behavior within their critical habitat year-round over five years.

“Summer beluga distribution has been well studied, especially in the upper inlet. But information on foraging behavior during the rest of the year was basically nonexistent,” Castellote said. “That knowledge is essential to identify threats impeding the whales’ recovery.”

Cook Inlet beluga whales are a distinct and isolated population that remains in Cook Inlet all year.

Between 1994 and 1998, the population plummeted by nearly 50 percent, due primarily to unregulated hunting. At that point, cooperative efforts between NOAA Fisheries and Alaska Native subsistence hunters dramatically reduced the harvest.

Despite protection after 1999, the beluga population continued to slowly decline.

In 2008, the Cook Inlet beluga whale population was listed as endangered. Now, more than two decades later, the population is still dropping.

There are an estimated 279 whales remaining as of 2018. Cook Inlet beluga whales are in danger of extinction unless the impediments to its recovery are identified and mitigated. 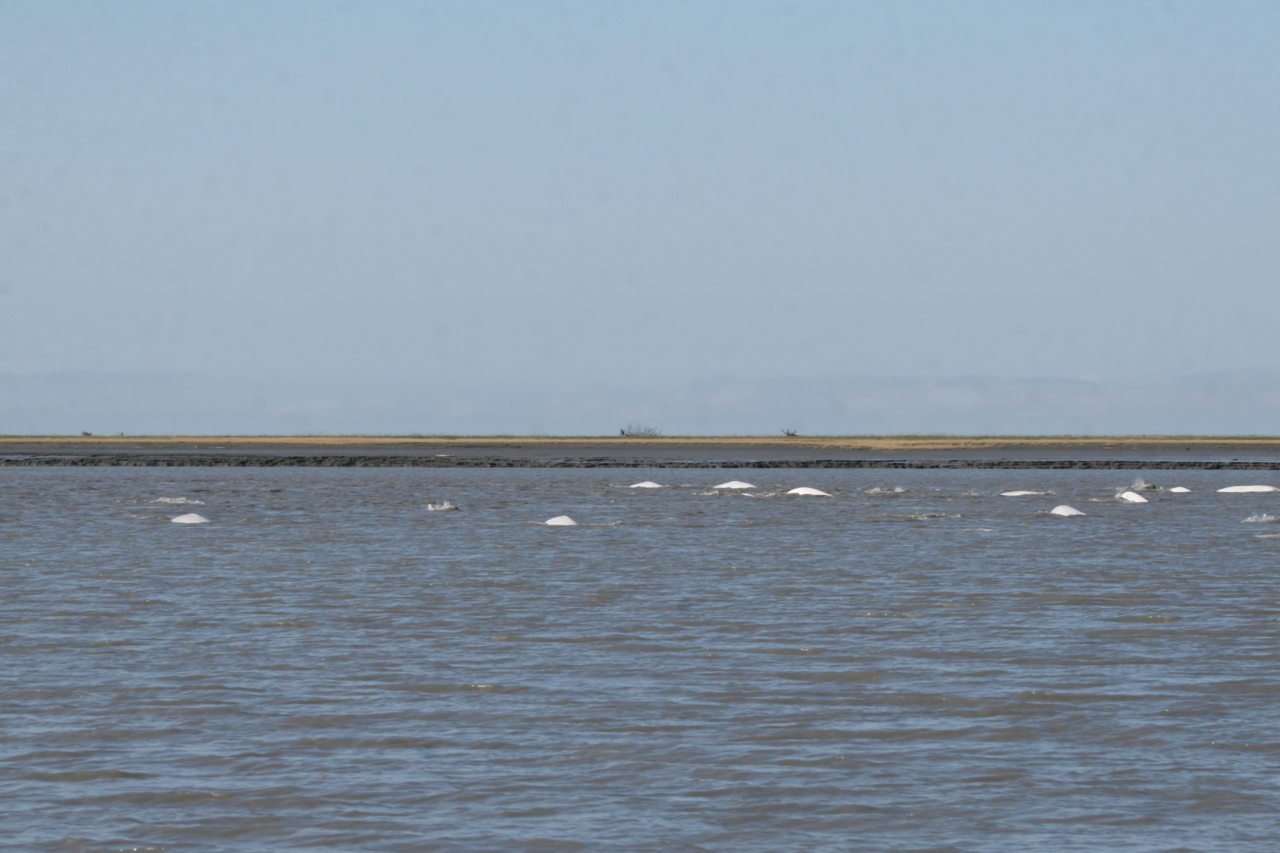 A Conservation Plan for the endangered Cook Inlet beluga whale was released in 2008 highlighting the lack of ecological information for this population. Castellote’s team initiated the Cook Inlet beluga acoustics research program in that year. The goal was to assess the year-round movements and foraging of beluga whales based on five consecutive years of passive acoustic monitoring.

A recovery plan for the endangered Cook Inlet beluga whale population was created in 2016. However, given the lack of ecological information available, specific threats preventing the population’s recovery could not be determined. The recovery plan highlighted the need for basic information on Cook Inlet whale biology and ecology. Seasonal distribution and foraging ecology—the target of the acoustics research program—were identified as major knowledge gaps.

In particular, very little was known of the whales’ movements and foraging behavior during fall, winter, and spring. During these periods, low light, ice, and the whale’s behavior—close association with ice, longer and deeper dives, and traveling in smaller groups—make visual detection difficult. 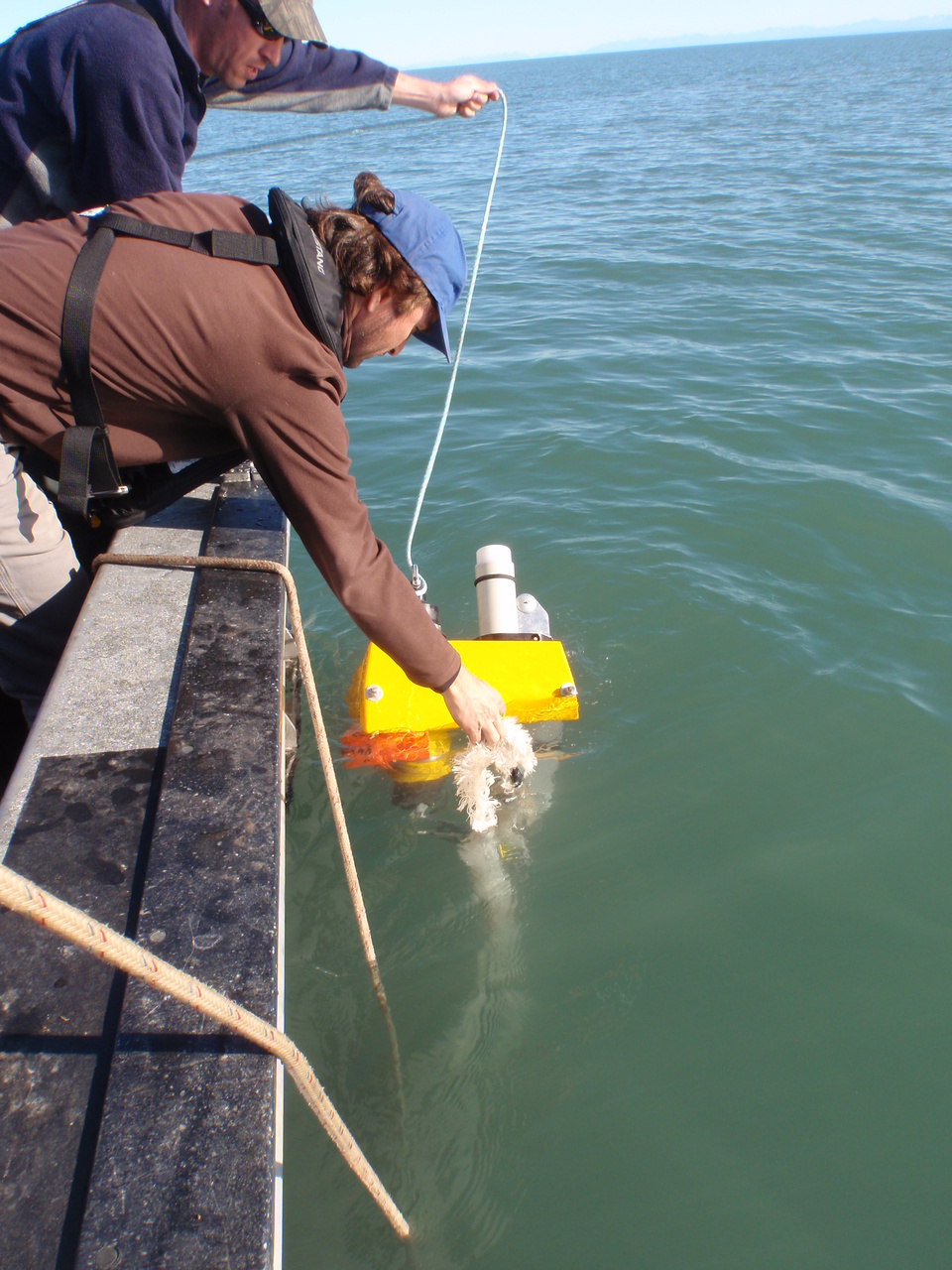 However, Cook Inlet is a notoriously challenging environment for anchored moorings.

“Extreme tides and currents, heavy glacial sedimentation, ice, and debris can bury, entangle, or sweep anchored instruments away,” Castellote explained. “Designing and testing instruments and moorings that could withstand these harsh environmental conditions was a big challenge for our program. Every colleague we talked to during the design phase of this project thought we were joking. It took two years and the combined talents of a multidisciplinary team to come up with a mooring design that could provide the data we needed.”

The team deployed the custom-made acoustic moorings at 13 locations within Cook Inlet beluga whale critical habitat in 2008. This began what they hoped would be five years of continuous monitoring.

The acoustic recordings revealed the location of beluga whales, when and where foraging behavior occurred. They also revealed the presence of transient killer whales, the only known predator to belugas. Killer whale detections were brief and hard to identify, reflecting the stealth mode in which these whales search for their prey.

Calls and whistles are social vocalizations that were used to detect the presence of belugas.

Echolocation clicks indicated foraging activity. When a beluga echolocates prey, sound produced by the whale bounces off its prey during during pursuit and capture. The sequence of clicks speeds up as the beluga gets closer to its prey, and often ends with a burst of clicks—a foraging buzz. This audio sequence ends with a crunch noise, indicative of a successful capture. 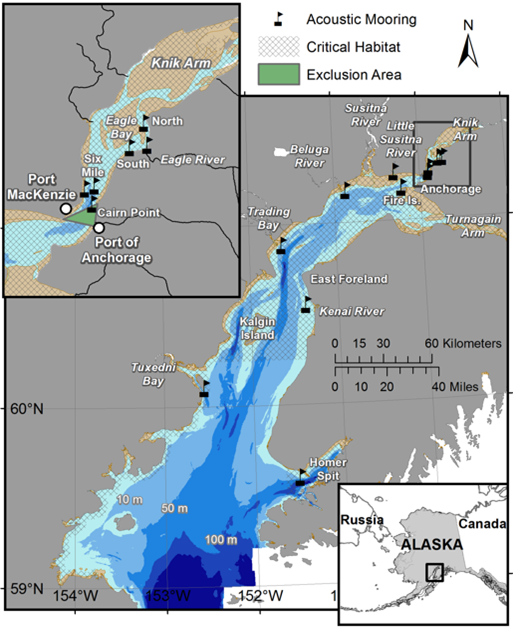 The acoustics program successfully monitored Cook Inlet beluga whales year-round from 2008 to 2013. The social calls and echolocation activity they recorded allowed the scientists to describe beluga spatial shifts and feeding patterns seasonally and annually throughout their critical habitat. Importantly, it expanded knowledge of beluga distribution, which had previously been almost exclusively confined to summer. Some of the findings supported previous survey results; others were new, and some unexpected: 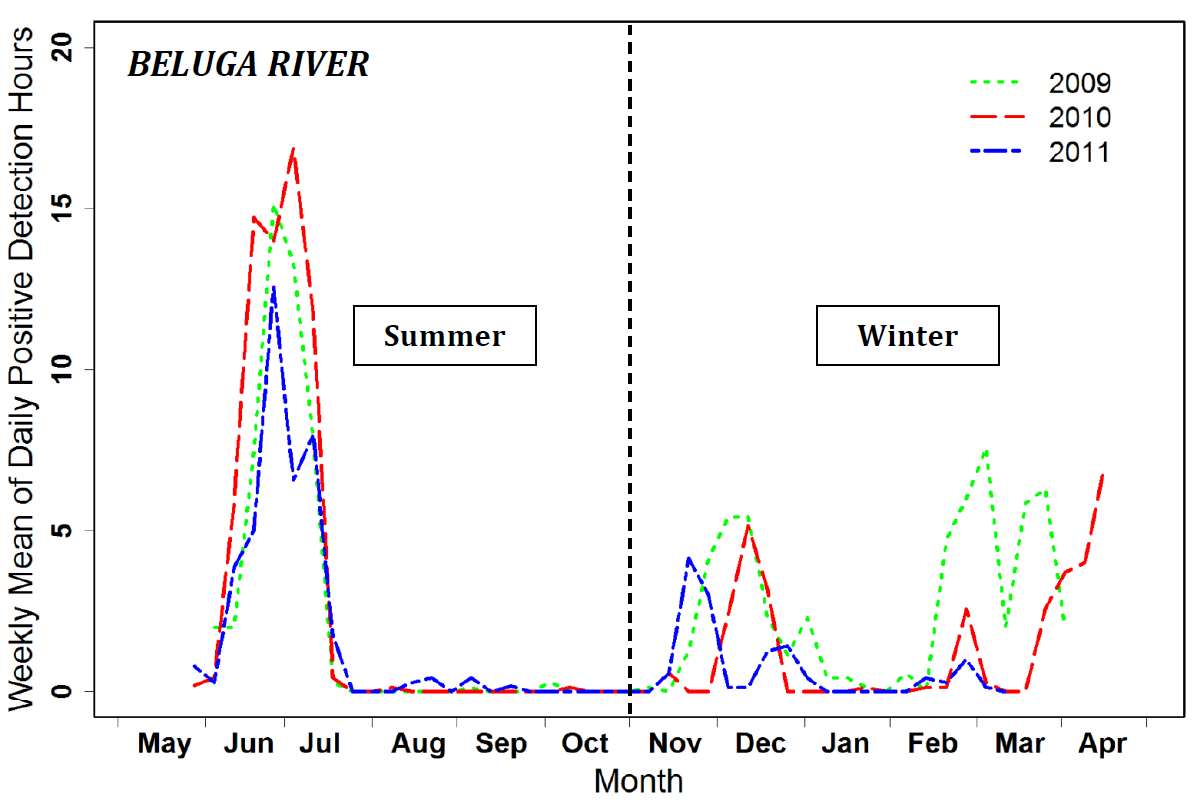 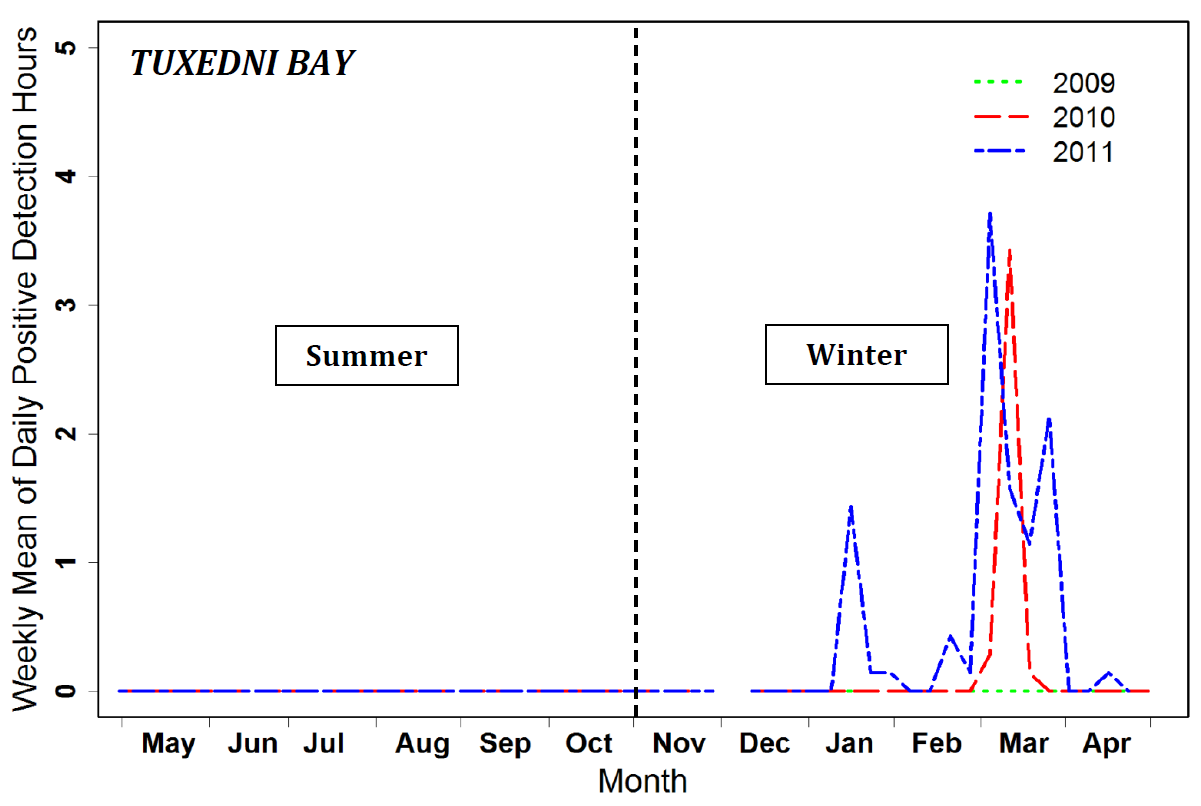 Acoustic recordings showed that Beluga whales were concentrated in upper inlet areas like Beluga River in summer; in winter they expanded into mid- and lower inlet areas such as Tuxedni Bay.

“The knowledge we obtained will help us figure out what areas within beluga critical habitat are most important, and when. Foraging information is a big step forward as now we can target areas where and when the belugas feed to see what prey species are there,” Castellote said. “Next we want to expand our coverage. We want to learn more about how noise from human activities might affect beluga behavior.  Passive acoustics has become a default tool in Cook Inlet critical habitat to improve our knowledge of beluga habitat use with the overall aim to help in beluga recovery.”

This research was a collaborative effort between:

Beluga call recordings are from the data collection of the Cook Inlet Beluga Acoustics Research Program collected by NOAA Fisheries’ Alaska Fisheries Science Center in partnership with Alaska Department of Fish and Game.