Allison Henry is a fisheries biologist with the large whale team at the NOAA Northeast Fisheries Science Center. She flies in a plane over the Gulf of Maine collecting critical population data about the North Atlantic right whale. 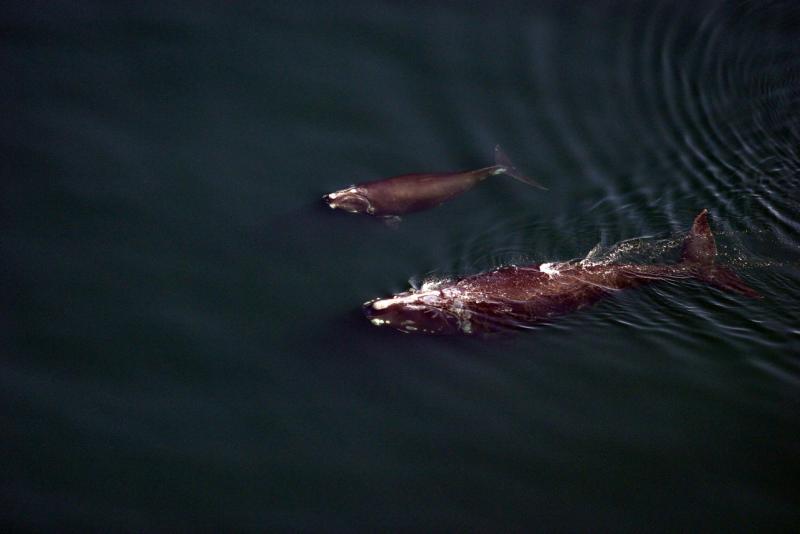 Imagine flying in a small twin engine plane above the Atlantic Ocean for six hours. Your body folded into a small window bubble, your eyes focused—looking for the slightest movement in the water below. You are searching for signs of right whales.

For Allison Henry, this is her job. Henry is a fisheries biologist with the large whale team at the NOAA Northeast Fisheries Science Center in Woods Hole, Massachusetts. She collects critical population data for the North Atlantic right whale, one of the most endangered whale species in the world.

Historically, right whales get their name from being the “right” whale to kill for oil and baleen. Whale hunts led to an over-exploitation of right whales. Then, following the ban on whale hunting in the early 20th century, right whales began to slowly recover.

Beginning in 2010, however, the population began to decline due to a combination of low calving rates and human threats. NOAA Fisheries declared an “Unusual Mortality Event” (UME) for the species in 2017 when an unusually high number of dead North Atlantic right whales were discovered in U.S. and Canadian waters. The UME is ongoing and at least 30 whales are known to have died over the past three years. Adding to the concern for the species is that over the last three calving seasons (2017-2019), there were only 22 births, which is about one-third of the previous annual birth rate. Scientists believe additional stress from human threats like entanglement is one of the reasons why females are calving less often. Whales can become entangled in fishing gear leading to stress, injury, and even death. Studies show 85% of right whales become entangled in fishing gear at least once in their lifetime, and 60% become entangled multiple times. Right whales are also vulnerable to vessel strikes as their foraging grounds, calving grounds, and migration routes overlap with vessel traffic along the Atlantic coast.

NOAA is committed to the protection and recovery of the North Atlantic right whale through research, conservation, and management. One way NOAA scientists learn more about right whale habitat use and population trends is through aerial surveys. 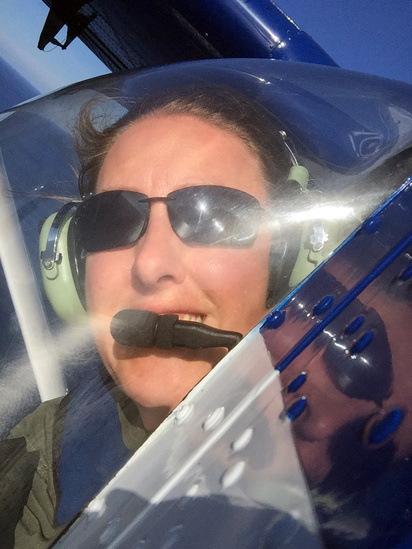 Allison Henry and her colleagues “mow the lawn” looking for right whales. That means they fly in repetitive linear patterns doing aerial surveys, going back and forth across the Gulf of Maine looking for signs of whales.

“It can be like finding a needle in a haystack,” she said. “When we find what we think or know is a right whale, we will break from the track lines and circle overhead, taking photographs of the individual whales.”

By taking photographs from the air, Allison and her colleagues document the locations of individual whales, track their movement patterns, and assess any injuries. She notes right whales only spend 10 percent of their lifetime at the surface, making tracking these endangered species difficult.

Scientists tag marine mammals to track their movements, but finding a successful and minimally invasive technique to tag right whales has proven difficult. According to Allison, it can be challenging to attach tags to right whales. They do not have dorsal fins, where tags can more readily be attached to other species like dolphins. Additionally, right whales are highly social, causing tags to be rubbed off by other whales as they come into physical contact with each other.

For Allison the search for right whales “is certainly not all glamorous, though it has its moments,” she said. “One of the highlights is being offshore surrounded by whales on a beautiful calm day and finding a new mother and calf pair that was never seen in the Southeast U.S. calving area.”

Back on land, Allison and her colleagues collect all of the photographs taken in the plane and on boats, and then use these photos to monitor the population. These photos are shared with the New England Aquarium, part of the North Atlantic Right Whale Consortium. The consortium maintains a photo-identification database to track individuals over the years using a right whale’s unique pattern of callosities.

Just like your fingerprints, individual whales have uniquely shaped patches of raised rough skin on their heads called callosities. Whales are distinguished by these as well as other signature scars and pigmentation patterns. When Allison returns to the office, she looks at each photo searching for these identifying markers. 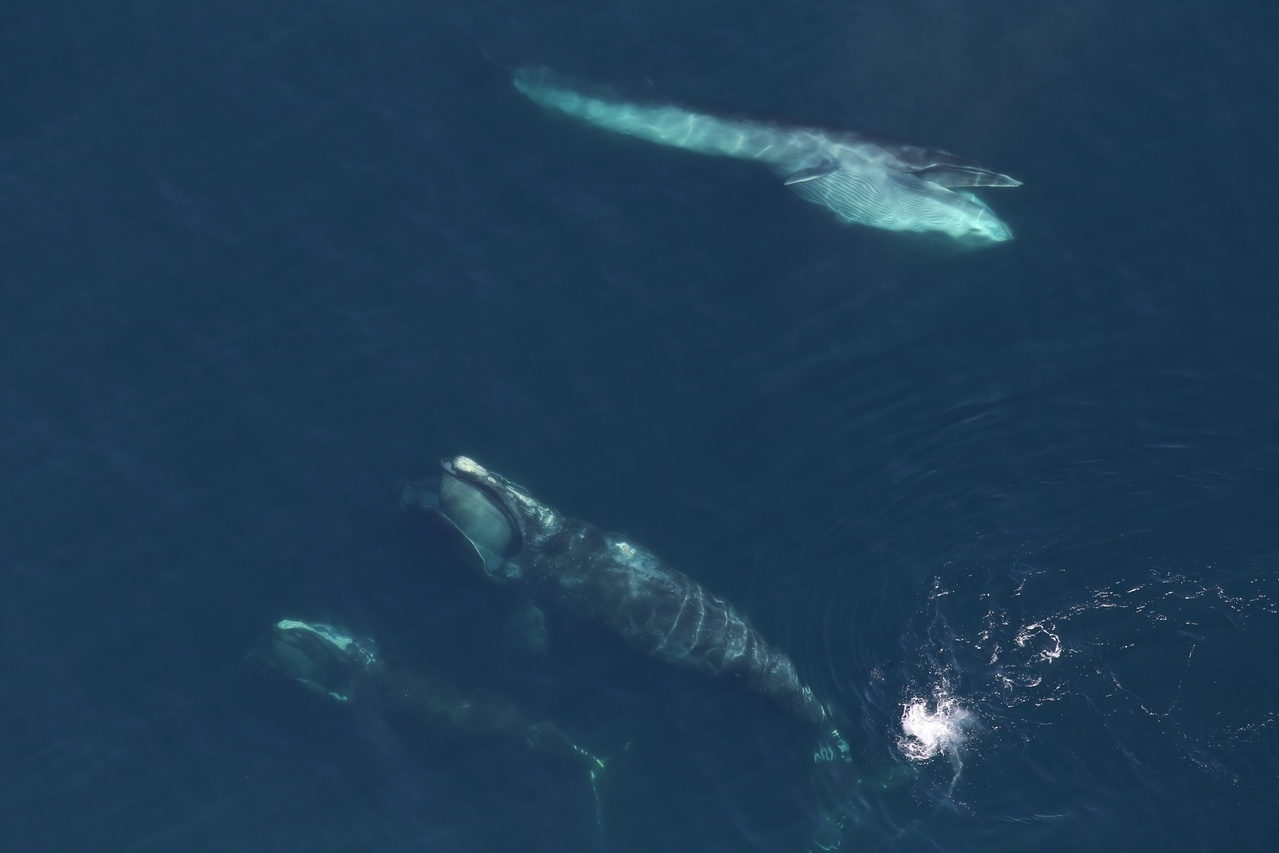 Henry and her colleagues fly over whales in the Gulf of Maine capturing photos like this one of whale #1327 aka Scoop and whale #3970. Image collected under MMPA research permit #17355. Photo Credit: NOAA/NEFSC/Allison Henry.

“My favorite part of my job is photo identification. Being able to recognize each individual whale allows us to track them,” she said. “Through the aerial surveys we can monitor where individuals and the population as a whole are spending their time and how much time they spend there.”

Monitoring the health status, movement, and population trends of right whales directly links to conservation and helps guide management decisions. For example, data from Allison’s surveys was used to identify Seasonal Management Areas where vessel speeds are restricted to 10 knots or less. This helps to reduce right whale death and serious injury due to vessel strikes. 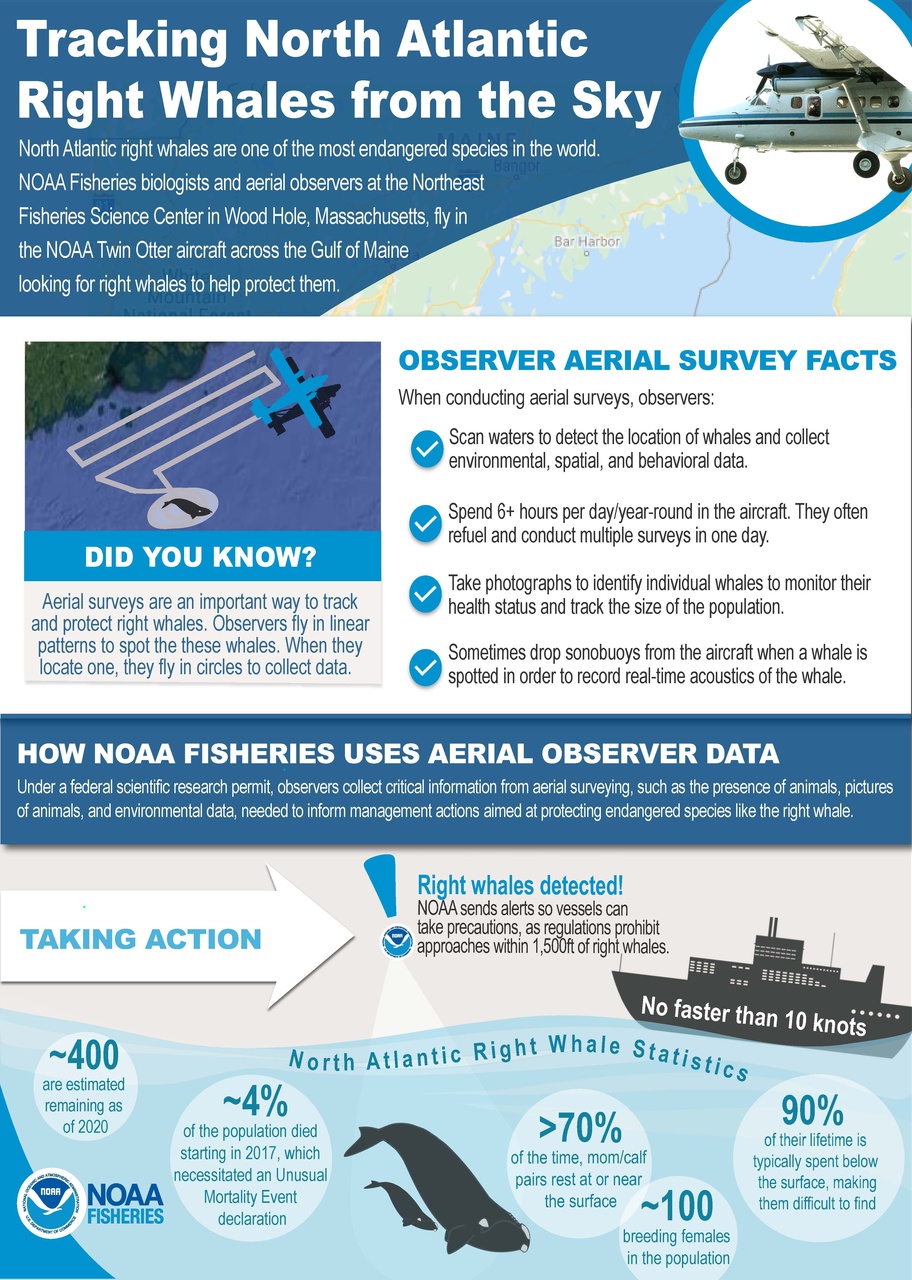 “Also, if we find three or more right whales in close proximity to each other outside of seasonal vessel speed management zones, we can trigger a temporary management zone to protect the whales.”

Each whale has an identification number so the right whale team can track the individual whales from year to year. Some of the more charismatic or regularly seen individuals also have names. For Allison, her work is more than just a job. She knows these whales, and can identify many of them instantaneously while out in the field or when looking through photographs.

Inspiring the Next Generation of Biologists

“I was in love with whales long before I became a fisheries biologist. I was 10 when I saw my first whale. I think every kid has an I-want-to-be-a-marine-biologist phase. I just never grew out of mine.”

When Allison went to college in Maryland on the Chesapeake Bay, there were few whales, just lots of crab and fish. However, she took related classes and internships to gain experience. Pursuing her interests in whales led Allison to participate in humpback whale research and work as a naturalist on whale watch boats. Allison then worked with Wildlife Trust to fly seasonal right whale aerial surveys in the southeast U.S. These seasonal aerial surveys were funded by NOAA and the Georgia Department of Natural Resources. In 2015, she was hired as a full-time permanent scientist at NOAA’s Northeast Fisheries Science Center.

“It's important to explore different options. I was lucky to find a niche quickly. But friends have gone from researching whales to prairie dogs to sea turtles,” she said.

“I am a marine biologist who flies in planes and goes out on boats, and gets airsick and seasick. It makes some work days pretty miserable. But when you are passionate about your job, it's not really a job, and having that passion helps bring you to work every day.

Editor’s Note: This profile depicts Allison Henry’s work under normal circumstances. In support of Federal guidance to slow the spread of COVID-19, NOAA has implemented a risk-based approach to aircraft and vessel deployment to keep our teams and those they work with as healthy and safe as we can. We will continue to evaluate our ability to conduct surveys while respecting the health and safety guidance from federal, state, and local authorities. NOAA teams continue to collect data remotely where possible and we are maintaining operational readiness and continuity.

Last updated by Office of Protected Resources on October 13, 2021