In the Pacific Northwest (WA, OR, CA), many watersheds receive up to 90-95% fewer spawning salmon (by biomass) compared to historic conditions of the late 18th and early 19th century, and this may have profound implications for the productivity of these watersheds and the species they support. 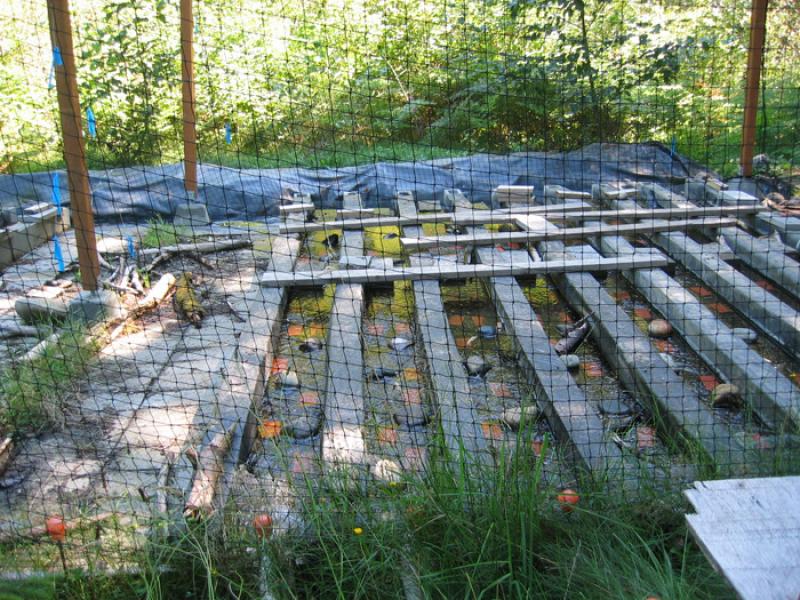 In the Pacific Northwest (WA, OR, CA), many watersheds receive up to 90-95% fewer spawning salmon (by biomass) compared to historic conditions of the late 18th and early 19th century, and this may have profound implications for the productivity of these watersheds and the species they support.

Millions of dollars are spent each year on restoring watersheds to recover these diminished runs, including threatened and endangered Pacific salmon and steelhead trout populations, generally by enhancing or restoring physical habitat structure or complexity.

The technique of placing large wood or boulders in streams is a particularly common and widely accepted method to improve habitat and fish populations. This approach assumes that physical habitat structure determines fish production and that food, such as that provided by invertebrates, is unimportant or not limiting. However, recent studies show that food web productivity may be vital to juvenile fish.

NWFSC scientists Peter Kiffney, Eric Buhle, and George Pess, along with collaborators Sean Naman (University of British Columbia) and Ryan Klett (Colville Tribe), conducted experimental and field studies to determine how well juvenile coho salmon and their food web fared in response to the combined effect of physical habitat structure (wood) and the productivity of the stream’s food web.

In experimental streams, the scientists manipulated small wood abundance and adult salmon tissue and followed the response of the natural stream food web, including juvenile coho, to these manipulations. In the field, they quantified the effects of natural differences in wood abundance and food availability (invertebrates) on juvenile coho growth across large sections of the Cedar River, WA.

And what they found was unexpected.

In a paper published in the journal Ecosphere, the experiment revealed that adding adult salmon tissue increased the productivity of invertebrates, with positive effects that rippled throughout the food web to benefit juvenile coho salmon by increasing their growth and body size. In juvenile salmon and trout, body size is often a key predictor of survival.

Consistent with the experiment, the field study provided evidence to support the positive effects of invertebrate productivity on coho growth; however, the field study also showed the negative effects of total fish density on coho, and, surprisingly, the scientists found that physical habitat structure in the form of large wood was negatively correlated with coho growth.

"We suspect that large wood structures may be concentrating the fish in one location, leading to more competition for resources such as space and food and contributing to lower coho salmon growth in the field," said Dr. Kiffney, lead author of the study.

"Adult salmon tissue and eggs provide essential resources to our streams that benefit juvenile salmon directly as they consume this material, and indirectly by increasing the productivity of invertebrates that they also eat. It's possible that enhancing physical habitat structure by adding large wood may not have had the desired effect if we consider that many all of our systems are food-limited, and this food-limitation may partly stem from diminished adult returns," he added.

Restoring and enhancing the physical environment of salmon habitat are vital to the recovery of listed salmon populations, however the study suggests that resource managers also consider the effects of increased fish density and the productivity of the food web that supports juvenile salmon.

The study, titled "Linking resource availability and habitat structure to stream organisms: an experimental and observational assessment" was published in the April issue of the journal Ecosphere.