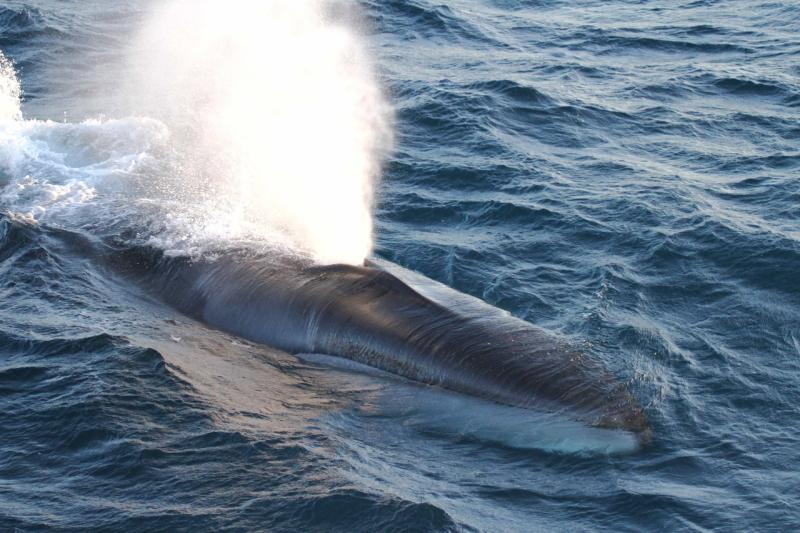 Fin whales are the second largest species of whale, sleek and streamlined in shape, and can be distinguished by their asymmetrical head coloration. The left lower jaw is mostly dark while the right jaw is mostly white. Photo credit: North Pacific fin whale, NOAA Fisheries/Paula Olson

New genetic research has identified fin whales in the northern Pacific Ocean as a separate subspecies, reflecting a revolution in marine mammal taxonomy as scientists unravel the genetics of enormous animals otherwise too large to fit into laboratories.

“The increasing study of cetacean genetics is revealing new diversity among the world’s whales and dolphins that has not been previously recognized,” said Eric Archer, a geneticist at NOAA Fisheries’ Southwest Fisheries Science Center (SWFSC) in La Jolla, California. Archer is the lead author of the identification of the new subspecies of fin whale.

“There’s definitely more diversity out there than has been on the books,” he said. “There has been a wave of progress in cetacean taxonomy.”

Fin whales are the second-largest whale on earth and the fastest whales in the ocean, which made them one of the last whale species hunted to the edge of extinction. Whalers killed about 46,000 fin whales in the North Pacific Ocean from 1947 to 1987. They are also one of the least known large whale species. They mainly roam the open ocean, farther from coastlines where they might be seen and studied more easily.

“We don’t get a lot of (genetic) material from them,” Archer said. However, advancing technologies allowed Archer and his colleagues to extract the detail they needed from samples at the SWFSC. The center’s Marine Mammal and Turtle Molecular Research Sample Collection is one of the largest collections of marine mammal genetic material in the world. They obtained additional samples from museums and other collections.

Traditional taxonomy—the division of biological variation into recognized species and subspecies—involves comparing telltale parts of the skeleton such as the skull. For whales, this may weigh hundreds of pounds. Few institutions can amass a large enough collection to compare different individuals from around the world.

“Fin whales measure 60 to 70 feet long and their skulls are around 15 feet long,” Archer said. “Just housing a couple takes a lot of room.”

Increasingly powerful genetic technologies now allow scientists to compare genes instead of skeletons. They extract DNA from tissue samples the size of a pencil eraser obtained from whales in the field.

“It’s the only realistic way to do this, because you cannot get enough examples to determine the difference through morphology alone,” Archer said. As they have looked more closely at the genetic patterns of whales around the world, scientists have discovered much more complex differences between them.

“Instead of digging through museum storage facilities for skulls to describe species or subspecies, genetic data unlock our ability to describe unique populations of whales across the globe,” said research biologist Barbara Taylor, leader of the SWFSC’s Marine Mammal Genetics Program. “It is a new way of looking at these animals.”

Telltale Differences in the DNA

Comparing the DNA from fin whales in the Pacific and the Atlantic oceans showed the scientists that they have been separated for hundreds of thousands of years. They also could assign individual fin whale samples to their ocean of origin using the genetic data. This is further evidence that they are separate and distinct subspecies.

Genetic research by NOAA Fisheries scientists has also revealed new details of other whales, including a new species of Baird’s beaked whale. It may also help determine whether a recently documented type of killer whale off South America represents a new species.

Similar genetic details can also help tailor protections for threatened or endangered whales, because the Endangered Species Act recognizes separate subspecies. That means that managers can target ESA safeguards for those subspecies that need it even when others may have recovered. This could make conservation efforts more efficient and effective.

About 14,000 to 18,000 fin whales in the northern Pacific Ocean will be affected by the new subspecies designation. NOAA Fisheries has documented that their numbers are increasing.

“There are other new species and subspecies that we are learning about thanks to the technology that has made this possible,” Archer said. “It is changing the field.”