Ghostly Octopod Highlights How Little We Know About Life on Earth

In this interview, NOAA Fisheries zoologist Mike Vecchione says that of all the space on Earth that contains multicellular life, over 95 percent of that is in the deep sea. And we know almost nothing about it.

Mike Vecchione is a zoologist with the NOAA Fisheries National Systematics Lab who specializes in deep-water cephalopods (a group that includes octopods, squids, and cuttlefishes). Although he wasn’t physically on the cruise, Vecchione was participating remotely that evening via live video feed. In this interview, Vecchione describes this mysterious species and what its discovery says about our understanding of life on Earth.

What was the first thing you thought when you saw this thing?

Mike Vecchione: I thought, Wow! I’ve never seen one that looks like that before.

OK. What was the second thing you thought?

The lack of chromatophores, or pigment cells, also stands out—that’s why it’s totally white. Another obvious feature is its diaphanous consistency—it’s sort of jelly-like. That’s common for deep-sea animals because they live in a very food-limited environment, and it takes a lot of food to maintain muscle.

The picture of this animal is sort of misleading because it’s lit—it looks like it could have been taken at some beach near my house. But it wasn’t. Describe the world this creature lives in.

The deep sea is an environment that’s completely alien to us. It’s almost totally dark. It’s extremely cold. And it’s under immense pressure. People want to know, How come the octopod doesn’t get crushed? And, If you brought it up to the surface, would it pop? The answer to both of those questions is no. That’s because there are no gas spaces in the animal to expand or compress, and fluids don’t compress much. The importance of pressure for animals in the deep sea has more to do with the functioning of their enzymes because pressure can change the folding of proteins. 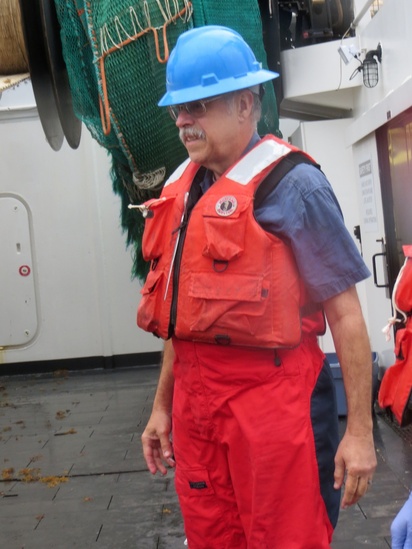 Dr. Mike Vecchione, Chief Scientist on a 2014 expedition aboard NOAA Ship Pisces to sample deep-sea biodiversity in the vicinity of Bear Seamount off New England. Photo courtesy of Mike Vecchione.

What is this creature’s ecological niche?

All octopods are predators, so it probably feeds on benthic animals of some sort. But other than that, anything I told you would be speculation. We also have no idea how long it lives or how fast it grows.

I keep hearing this creature described as an octopod. Why not octopus?

I use the word octopus for things that are of the genus Octopus, which this isn’t. Octopod is a more general term, and it includes the dumbos, the deep-sea octopods, and the shallow-water true octopuses.

Does this octopod have a name yet?

No. And it won’t, not until we get a specimen of it. Some species have been described based on photo records. But it’s much better to have a specimen so you can see the internal anatomy and get DNA sequences.

Octopods are famous for their dynamic coloration. What’s that coloration used for in most octopods, and what does its absence say about this one?

Octopods use dynamic displays for camouflage. Also if they want to look scary they can puff up and make a dynamic pattern on their bodies. And presumably they use it to communicate with other members of their species. There’s been recent evidence that some shallow-water octopuses will flash different colors before they fight with one another, presumably as a display of dominance. This one doesn’t look like it would be capable of dynamic patterning, and that probably wouldn’t be very useful anyway because it lives in near-total darkness. But we could be wrong about that. We’ve been wrong about many things in the past.

If It’s so dark in the deep sea, why does this octopod have eyes?

This octopod does indeed have eyes and they appear to be functional. But the deep sea isn’t completely dark. Many animals produce bioluminescence, so not everything down there is blind.

Why is this discovery important?

The headlines are all emphasizing that this is possibly a new species. To me that’s not the important thing. We know so little about life in the deep sea that new species there are a dime a dozen. But this discovery highlights just how little we know about the deep sea.

I know exploring the deep sea satisfies a very deep human instinct and curiosity, but is there also a more practical reason for going there?

We can’t protect our planet if we don’t know what lives on it and how life functions. We used to think that the deep sea was so remote that we couldn’t affect it. But that’s not true. We impact the deep sea in many ways, from pollution to warming to acidification to expansion of oxygen minimum zones, and we don’t even know what’s down there that we’re affecting. Of all the space on Earth that contains multicellular life, over 95 percent of that is in the deep sea. And we know almost nothing about it.