Green Crab Detected in Alaska for the First Time 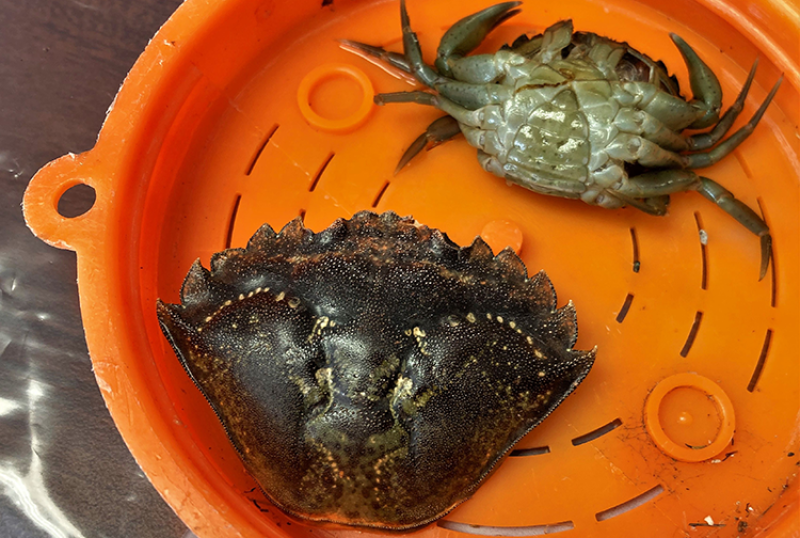 The green crab is an invasive marine species spreading throughout the coastal waters of the United States. Efforts between NOAA Fisheries and Metlakatla Indian Community have been leading the way on monitoring to detect this species’ presence in Alaskan waters.

The green crab has been found in U.S. waters since the 1800s, but this is the first confirmed presence in Alaska. They are a threat to native species and habitats. They are highly competitive predators that can decimate shellfish populations, outcompete native crabs, and reduce eelgrass and salt marsh habitats. They are a serious threat for Alaska’s tidal habitats.

In 2020, the Metlakatla Indian Community began an early detection program. This made data collection more efficient and increased the monitoring areas. No green crabs were found in 2020 or 2021. During a molt survey in July 2022, the team found three shed carapaces from invasive green crabs. This set off a multistakeholder response to address their presence.

A team of Community and NOAA staff worked with a Sealaska Heritage Institute Intern, Natalie Bennett. They took a multi-pronged approach with carapace surveys and trapping to make this discovery.

“Natalie found the first carapace rather high in the intertidal zone. Later, crabs were found in tide pools and deeper areas. This experience gave us valuable insight in looking for founder populations of green crab in southern Southeast Alaska,” said Linda Shaw, a wildlife biologist with NOAA Fisheries in Alaska.

Future surveys will allow scientists to monitor the presence and expansion of the green crab. The Alaska Department of Fish and Game will be expanding trapping efforts in the region to monitor more areas. By immediately being made aware of their presence, monitoring will allow for future adaptations to control the species’ population in Alaska.

The Metlakatla Indian Community, NOAA Fisheries, and Alaska Department of Fish and Game have built a strong partnership. They provide technical and financial support, technical assistance, and subject matter experts to bolster the community-based monitoring program.

Invasive green crabs have distinct physical features that distinguish them from other crabs. Their shell is a green-brown color with three rounded bumps between the eyes and five marginal teeth on each side of the eye.

If you see an invasive green crab on Annette Islands Reserve, call (907) 886-FISH to make a report. If you encounter a potential green crab elsewhere in Alaska, take photographs from multiple angles and send them to Tammy Davis. Then submit a report to the Alaska Invasive Species Reporter, or call the Invasive Species Hotline: (877) INVASIV.