The Northeast Fisheries Science Center recently completed an aerial survey of harbor seals along the entire coast of Maine, the first since 2012. A NOAA Twin Otter aircraft covered the area in six days, surveying nearly 1,000 locations during harbor 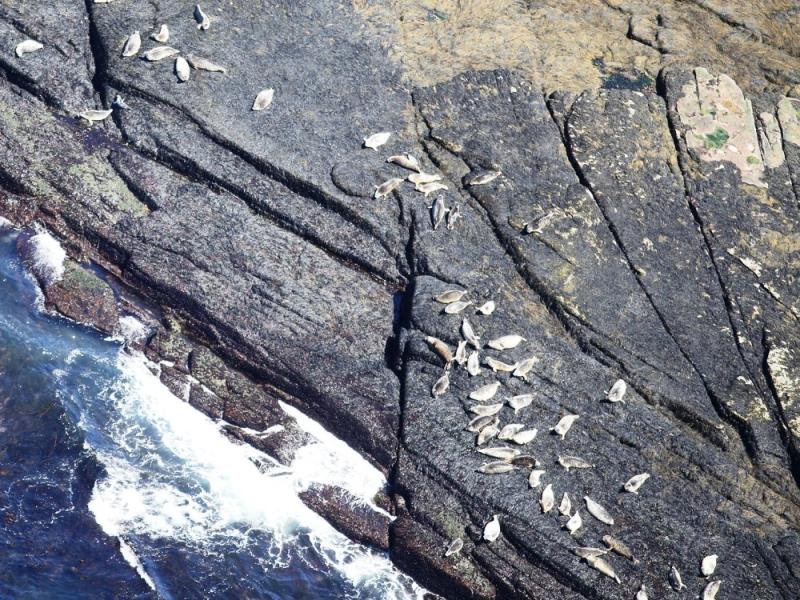 The Northeast Fisheries Science Center recently completed an aerial survey of harbor seals along the entire coast of Maine, the first since 2012.  A NOAA Twin Otter aircraft covered the area in six days, surveying nearly 1,000 locations during harbor seal pupping season, which occurs in May and June.

“We had great weather and only one down day lost to poor visibility, so the aerial team, who were experienced and well-coordinated, was able to cover a lot of ground and see a lot of pups and pregnant females,” said Kimberly Murray, leader of seal research at the NEFSC. “The Twin Otter pilots had experience doing seal surveys in Alaska and were familiar with flying to observe animals on ledges and rocky terrain, so that was a bonus.”

The coastline was divided into three sections: downeast, central, and southern Maine. Each of those sections was further divided into bay units with specific target locations along ledges and on rocky outcrops. The survey team included Rob DiGiovanni of the Atlantic Marine Conservation Society, Jennifer Gatzke, a former NEFSC aerial survey team member now working with the NOAA West Coast Region Inner Columbia Basin Office in Idaho, and Peter Duley of NEFSC's aerial survey team, who served as photographer.

Since the NOAA Twin Otter usually assigned to the NEFSC was busy with the North Atlantic right whale survey, a second aircraft with pilots flew up from their home base in Lakeland, Florida, stopped to pick up the survey crew in Hyannis, and flew on to their survey base for the week in Rockland, Maine.

Results of the recent survey, conducted May 19-25, will be compared with the abundance estimate from the 2012 survey. Thousands of images must first be reviewed and numbers determined. The survey is conducted within two hours of low tide to allow for the maximum number of animals to be hauled out on rocky outcrops and on ledges; these sites are submerged at high tide and might not be visible to the survey team.

In early February, Murray and NEFSC Protected Species Branch Chief Sean Hayes joined a U.S. Navy harbor seal tracking and tagging project in the Chesapeake Bay and Virginia nearshore waters. The group captured and tagged seven harbor seals off the eastern shore of Virginia between February 4 and 8.  Five of the seven tagged seals were still transmitting via their satellite tags on May 24; four of the five were located in the Gulf of Maine during the NEFSC's recent harbor seal aerial survey there, and one male was located off Hyannis, Mass.

The February tagging team, which included many organizations, was led by Rob DiGiovanni of the Atlantic Marine Conservation Society, who has participated in a number of seal tagging projects with the NEFSC, including the May aerial survey.

The U.S. Navy has been interested in tagging harbor seals in the lower Chesapeake Bay and Virginia nearshore waters to understand more about their presence in the region. The area is home to many Navy facilities as well as training and testing activities that could affect harbor seals. The information gained will provide baseline data needed to help assess any potential effects those activities could have on harbor seal movements, seasonal habitat use, and migration routes.

“We have already learned that harbor seals travel long distances and don’t stay in one area,” Murray said. “Although many adult harbor seals migrate to Maine to pup in the spring, their movements make it a challenge to estimate population abundance when many could be in the water when we conduct our surveys. We try to pick a time to survey when the most seals are likely to be at that location.”

Harbor seal pups stay with their mothers for a month or more before weaning, but go in and out of the water frequently. They sometimes are left onshore while the mothers go off to feed. Anyone seeing a harbor seal pup should remain a safe distance away and keep as quiet as possible to give the pup the best chance of reuniting with its mother, who could abandon the pup if humans are nearby.

Seals are marine mammals and are federally protected under the Marine Mammal Protection Act. It is illegal to harass, hunt, capture, or kill a marine mammal, and viewing safe guidelines recommend staying at least 150 feet away from them.  If you see an animal in distress please report it to your local Marine Mammal Reporting Hotline.