Even low levels of oil pollution can damage the developing hearts of fish embryos and larvae, reducing the likelihood that those fish will survive. 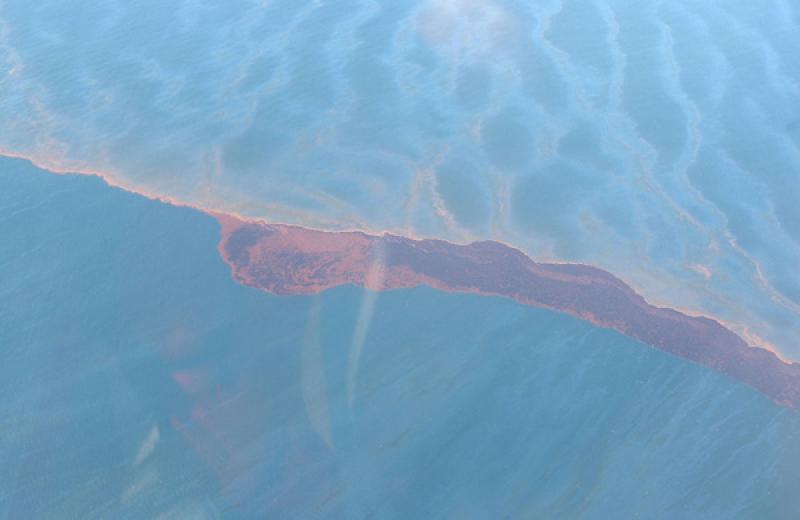 Think of an oil spill, and images of fouled beaches and oil-soaked seabirds come to mind. But there are less visible effects as well. For instance, even low levels of oil pollution can damage the developing hearts of fish embryos and larvae, reducing the likelihood that those fish will survive. Scientists have known of this effect for some time, but the underlying mechanism has remained elusive.

Recently, researchers from NOAA Fisheries partnered with a team from Stanford University to discover how oil-derived chemicals disrupt the normal functioning of the heart muscle cells of fish. In an article in the February 14 issue of Science, they describe how polycyclic aromatic hydrocarbons, or PAHs – a class of compounds prevalent in oil – can disrupt cardiac function in young bluefin and yellowfin tuna by blocking ion channels in their heart muscle cells.

The new findings are part of the Natural Resource Damage Assessment conducted by NOAA and other federal and state trustee agencies following the 2010 Deepwater Horizon oil spill in the Gulf of Mexico. That spill occurred across a large region where the Western stock of Atlantic bluefin tuna spawn, raising the possibility that the eggs and larvae of this valuable species were exposed to crude oil. Natural Resource Damage Assessments are used to determine liabilities after a spill and to help develop restoration plans.

"We've known that oil causes problems with the hearts of developing fish based on research following the Exxon Valdez oil spill," said Nat Scholz, one of the authors of the paper and the leader of the Ecotoxicology Program at NOAA's Northwest Fisheries Science Center in Seattle. "Now that we better understand the precise mechanism, we can develop more subtle and sensitive indicators of cardiac stress in fish embryos and larvae and more accurately assess the impact of pollution on our natural resources," Scholz said.

With each heartbeat, countless cardiac muscle cells are synchronized so that their individual contractions add up to the coordinated pumping action of the heart. Near the end of each contraction cycle, positively charged potassium ions flow out of the muscle cell through ion channels in the cell membrane, priming the cell for the next cycle. This new research demonstrates that PAHs can block potassium ion channels in the heart cells of tunas. They can also disrupt calcium ion cycling within isolated muscle cells. Together, these effects are thought to underlie the slowed or irregular heartbeats observed in fish embryos exposed to crude oil.

"When we see these kinds of acute effects at the cardiac cell level," said Barbara Block, who led the team of Stanford University scientists working on this study, "it is not surprising that chronic exposure to oil from spills such as Deepwater Horizon can lead to long-term problems in fish hearts."

The study notes that, because the structure of ion channels is similar in the heart muscle cells of many species, related disruptions might occur in the hearts of other vertebrates.

To demonstrate the effect of PAHs on the cardiac cells of tuna, scientists had to measure the flow of electrical current across the membranes of individual cells. "That requires some very specialized skills and equipment," said John Incardona, another NOAA scientist and a coauthor of the study.

This experimental capacity was provided by the Tuna Research and Conservation Center, jointly operated by Stanford University and the Monterey Bay Aquarium. Scientists there measured the electrical properties of individual heart muscle cells using a "patch clamp" technique, which involves micron-scale glass electrodes.

When a person goes to an emergency room with chest pains, doctors test for elevated blood protein levels that are diagnostic of a heart attack or other cardiac injury. "Now that we understand how PAHs affect heart cells, we can work toward identifying new biomarkers that can be similarly diagnostic in fish from polluted habitats," said Nat Scholz.

This will lead to new tools for assessing the impact of pollution on natural resources. For instance, scientists might assess the baseline level of those biomarkers, then test for them again if an oil spill occurs to measure the impact on fish. Such a technique might be particularly useful in the Arctic, where retreating ice cover is opening new areas to oil development. Because the ecosystem there is still relatively pristine, now is the ideal time to collect baseline measures of ecosystem function, before oil development takes place.

PAHs are also present in urban stormwater runoff to coastal areas and watersheds that fish use as spawning grounds. Many municipalities are working to improve water quality using pervious pavements, green roofs, and other surfaces that absorb stormwater. With new diagnostic techniques based on biomarkers, scientists will be better able to evaluate the effectiveness of these pollution control measures.

Understanding the role that PAHs play in disrupting cardiac function in fish will open many new avenues for environmental research and assessment. "What made this breakthrough possible," said John Incardona, "was the serendipitous teaming up of two groups with complementary expertise." Once again, collaboration is the key to scientific progress.

The authors will present their findings at the 2014 annual meeting of the American Academy for the Advancement of Science in Chicago.