Horseshoe Crabs: Managing a Resource for Birds, Bait, and Blood

Because horseshoe crabs are so important as a food source for shorebirds, as bait, and for human health, their harvest is closely managed. 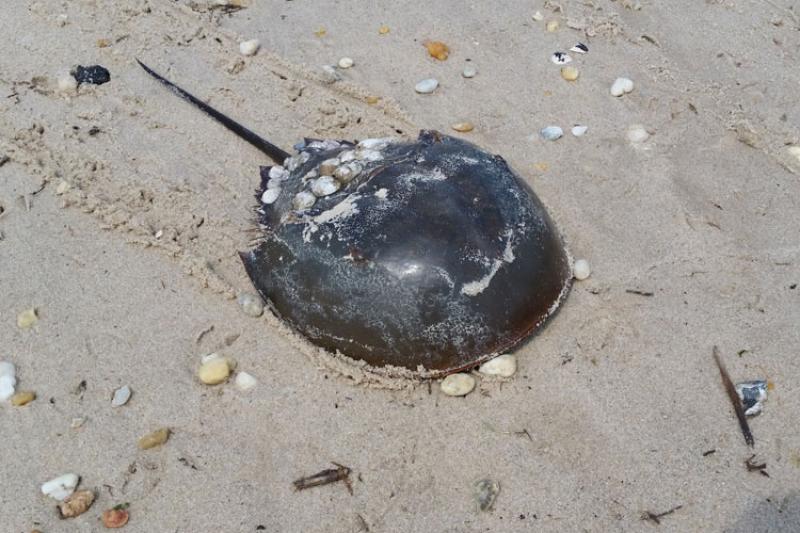 A few weeks before summer vacationers take over the Atlantic coast beaches in New Jersey and Delaware, horseshoe crabs (Limulus polyphemus) arrive in the thousands along the sandy beaches of the Delaware bayshore. During the months of May and June, especially at high tides during new and full moons, these prehistoric-looking creatures lay millions upon millions of tiny, pearly, green or pink eggs.

This year, staff from the Greater Atlantic Region joined the American Littoral Society to see these creatures first hand during a visit to Thompson Beach in Delaware Bay. We even saved a few stuck in the rocks during low tide! 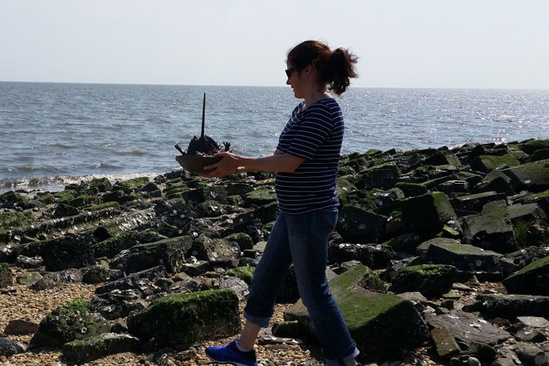 Although horseshoe crabs live all along the Atlantic coast from northern Maine to the Yucatan Peninsula and the Gulf of Mexico, Delaware Bay supports the largest spawning population in the world.

Horseshoe crabs are not true crabs. They are arthropods, and are more closely related to spiders, ticks, and scorpions. The geologic record shows that horseshoe crab ancestors can be traced back to around 445 million years ago, about 200 million year before the dinosaurs! Built somewhat like a tank, horseshoe crabs have a hard front and back shell made of chitin (a structural polymer made from glucose), and tail called a telson. Contrary to popular belief, the tails don’t sting. Horseshoe crabs use their tails to flip themselves over if they are upside-down.

Horseshoe crabs are very sensitive to light. They have 10 eyes--a pair of compound eyes on the front shell, and other photo receptors around their bodies, including on the top of the shell, on the tail, and near the mouth.

Female horseshoe crabs partially bury themselves in the sand while depositing clusters of about 4,000 tiny eggs. In one evening, a female crab can lay several egg clusters, and she may spawn repeatedly over several nights to lay 100,000 or more eggs. The eggs will hatch within two to four weeks. Tiny horseshoe crabs emerge from the sandy beaches and head to the shallow waters. Young horseshoe crabs look like miniature adults. They spend their first few years close to shore, but move farther offshore as they get older. Remarkably, horseshoe crabs can live for more than 20 years. 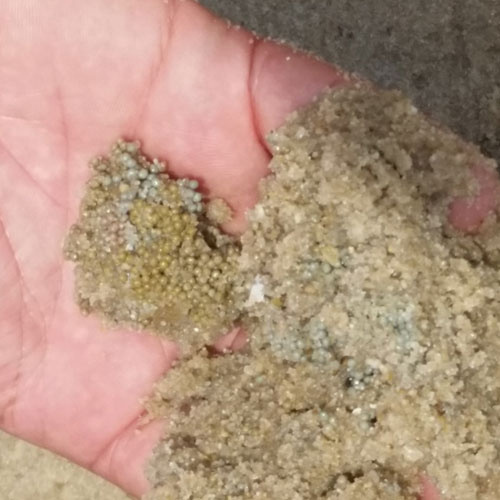 Horseshoe crab eggs play an important ecological role in the food web for migrating shorebirds. The birds stop along the shores of Delaware Bay to feed on the crabs and rebuild their energy reserves as they migrate from as far away as Argentina’s Tierra del Fuego on their way to their nesting grounds in the Arctic.

Horseshoe crabs are also used as bait for commercial American eel and conch fisheries along the coast. Their blood (which is blue!) plays an essential role in human medicine. Pharmaceutical companies use Limulus Amoebocyte Lysate (LAL) made from horseshoe crab’s blood to test the sterility of vaccines, drugs, prosthetics, and other medical devices. The LAL test is the most accurate test currently available.

Regulations allow the biomedical industry to collect a portion of the crab’s blood, and then release it alive in the area it was collected. More than 400,000 crabs were harvested for blood extraction in 2016. Because 10 to 15 percent of the harvested crabs die during this process, scientists are working to develop alternatives to using horseshoe crab blood for these tests.

We know little about the status of the horseshoe crab population, but from data we do have, it seems that horseshoe crab abundance has increased in the southeast (North Carolina through Florida) and remains stable in the Delaware Bay region (New Jersey through Virginia). However, horseshoe crabs appear to be decreasing in the New York and New England regions.

Because horseshoe crabs are so important as a food source for shorebirds, as bait, and for human health, their harvest is closely managed by the Atlantic States Marine Fisheries Commission. A wide variety of federal agencies including NOAA Fisheries’ Habitat Conservation Division, the  U.S. Fish and Wildlife Service, the U.S Army Corps of Engineers, and many state, local and non-governmental partners work to protect and to restore horseshoe crab habitat so that horseshoe crabs, and shorebirds, can enjoy their day at the beach as much as people do.