How Hawaiian Monk Seals Get Their Names 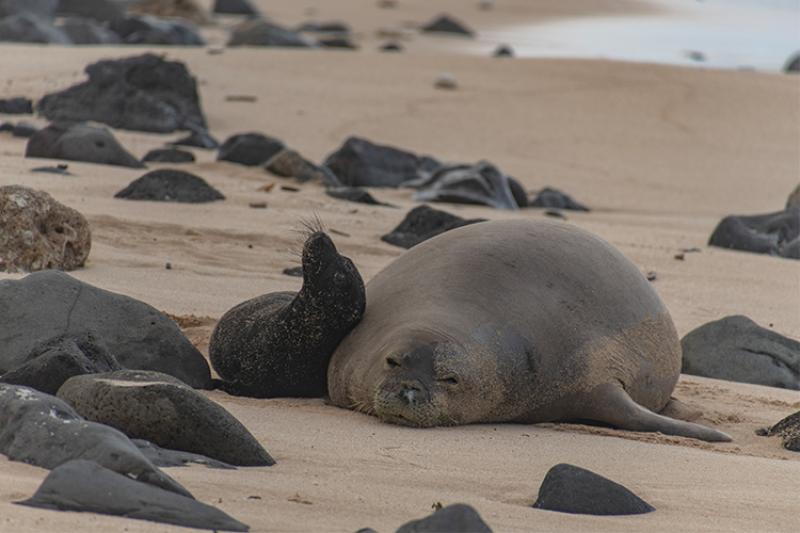 NOAA will often refer to a seal by an alphanumeric identifier such as “RA20.” This is the permanent ID number that we have assigned to that seal. NOAA doesn’t really “name” seals—we only assign the ID numbers. These numbers allow us to easily tell seals apart and keep track of their movements and life histories. With this information, we can count the seal population and optimize our conservation strategies and health interventions.

Each seal has its own unique ID number, which can tell you a little about it. For example, the “R” in RA20 is the color of the tag—red. This color tells us where the seal was born or tagged for the first time (the main Hawaiian Islands, in this case). The “A” tells us what year the seal was born (2009), and the “20” is a unique identifier that no other “RA” seal will have.

We tag both of a seal’s hind flippers with consecutive numbers (for example, 20 and 21) in case one falls off or breaks, and to ensure one is visible when the seal is laying on its side. We also drill holes into the tags in a specific pattern to identify the year the seal was born, in case the ID wears off with time.

Naming practices vary by island. On Kaua‘i and Maui, seals are generally known only by their NOAA ID numbers. On O‘ahu, volunteers and community members began informally giving seals names many years ago. These names included Rocky, Right Spot, and Benny. The names were based on things like the seal’s common hangouts, physical characteristics, and behaviors. These days, seals are named through a process with roots in Hawaiian cultural tradition.

In Hawaiian culture, the tradition of naming is important. When a name is given to a child, it is believed that they will encompass and embody the meaning of that name in their lifetime.

This process of naming can also be a spiritually powerful one. When a mother is pregnant, she, a family member, or both may choose a name based on:

The process of naming can also include a family name or location.

In keeping with local culture, NOAA partner organizations have engaged Hawaiian cultural practitioners and community members in the naming process for the past several years.

Some stranded seals are brought to The Marine Mammal Center’s Hawaiian monk seal hospital and visitor center, Ke Kai Ola, on Hawaiʻi Island for rehabilitation. A cultural practitioner from the area where the seal was rescued names the animal, according to Lauren Van Heukelem, Response and Operations Coordinator at the Center.

“To decide on a Hawaiian name that best resonates with the seal, the cultural practitioner takes special consideration of the animal’s behavior through careful observation, and incorporates insights from staff and volunteers who treat the animal,” Van Heukelem said.

Hawaii Marine Animal Response has also been involved in naming Hawaiian monk seals. HMAR set up a program on Oʻahu and Molokaʻi with support from cultural practitioners that empowers students in Hawaiian immersion classes and Hawaiian studies to name seal pups. HMAR provides all the information they have on the pup, including defining physical characteristics, genealogy, photographs, and the location where the pup was born. Guided by their kumu (teacher), students use the information to “gift” the seal a Hawaiian name.

For example, in 2021, the Mālama Honua Charter School in Waimānalo, on O‘ahu, had the opportunity to name a pup born to mom Pua (flower; RF34). Students decided on the name Mohala, which means “to unfold as flower petals; blossoming, and opening up.” According to the students, they chose this name because of the pup’s mother, noting that the pup would “grow and blossom into a beautiful monk seal like his/her mama.” The name is also a reference to the ‘Ōlelo Noʻeau (Hawaiian proverb), “Mohala i ka wai I ka maka o ka pua.” This means, “unfolded by the water are the faces of the flowers.” Fittingly, the Waimānalo ahupua‘a (traditional land division) is known for its life-giving water sources, and Mohala is a child of Waimānalo.

The Importance of Naming Seals

As monk seal births have become more common in the main Hawaiian Islands, more people are able to experience the seals’ presence than ever before. Many communities have become familiar with the seals that frequent their shorelines, creating a bond that is an important form of community stewardship for the seals.

Giving children the opportunity to name the seals “sets a tone which supports the aspect of kuleana [responsibility], bestowing upon these keiki [children] a responsibility to the animals, the environment, each other, the community, and the world,” according to Kimeona Kane, a cultural practitioner from O‘ahu. “These opportunities stimulate thoughts and actions that will provide a foundation for a better future.”

Two of the recent additions to the growing population of endangered Hawaiian monk seals were recently gifted the names Laki and Maka‘u‘ole. Since the pups were born on the North Shore of O‘ahu, HMAR engaged students at Kahuku Elementary School and Waialua Elementary School in the naming of these seals.

Kahuku Elementary School students gifted the name Laki to RH92’s new pup. Laki means lucky in Hawaiian. According to HMAR, the students gifted her this name for many reasons, one of which being that we didn’t expect RH92 to give birth on O‘ahu as she was born on Kaua‘i. The students felt the community is lucky to have the experience to watch Laki grow!

Waialua Elementary School students gifted the name Maka‘u‘ole to RN58’s new pup. Maka‘u‘ole means fearless. According to HMAR, the students chose the pup’s name because his mother, also known as Luana, is fearless and has tackled many challenges in her lifetime. The students hope that by gifting Maka‘u‘ole his name, he will be fearless in life, too!

There is a flip side to all of the positives that come with naming seals. Conservation challenges can arise when the public perceives monk seals as anything other than what they are—endangered wild animals that deserve space and peace. We run the risk of attributing human characteristics or behaviors to these wild creatures, or viewing them like we would domesticated animals. This makes the seals more likely to be approached or even fed, which puts them at risk of losing their wild tendencies and can create health and safety concerns.

But names and the act of gifting names cultivate connection and empathy in the many people and communities who share the shores with Hawaiian monk seals. So, for as long as there are new pups being born on Hawai‘i beaches, there will be communities naming and honoring them.

Last updated by Pacific Islands Regional Office on May 11, 2022