How Many Cowcod Rockfish Populations Are Out There?

Since being declared overfished in 2000, cowcod (Sebastes levis) has been managed for recovery as a continuous population throughout its range, from the U.S.–Mexico border to just north of Cape Mendocino, California. But what if it’s more than one population? 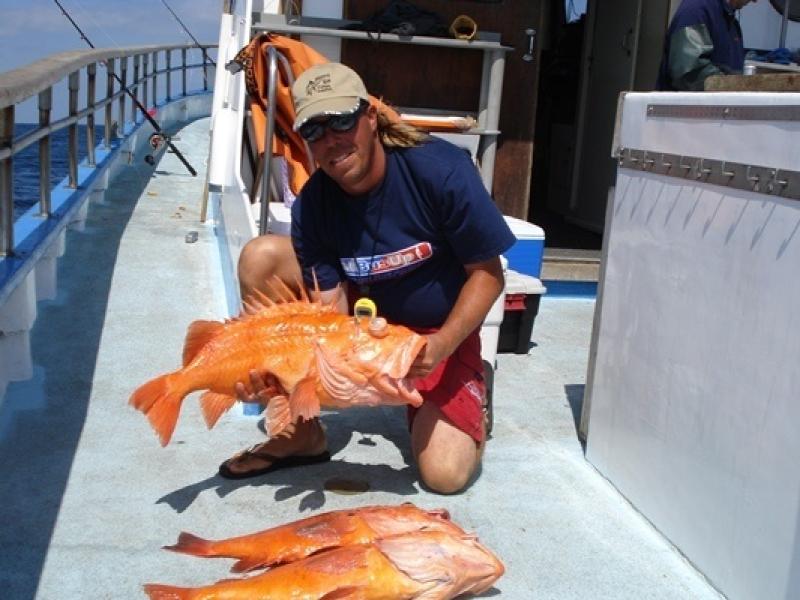 Since being declared overfished in 2000, cowcod (Sebastes levis) has been managed for recovery as a continuous population throughout its range, from the U.S.–Mexico border to just north of Cape Mendocino, California. But what if it’s more than one population? That could change how it is managed.

Cowcod is one of the largest rockfish species, reaching almost 39 inches (1 meter) long, and may live up to 55 years. As Paul Chittaro, co–author of the paper, pointed out, "Because cowcod takes a long time to mature, a bit too much fishing can do a lot of damage."

These fish are distributed across two major marine biogeographic regions, the Oregonian and Californian provinces, which share a boundary at Point Conception, a headland along the Pacific coast of California. Chittaro said, "Upwelling is strong in that area, which creates a barrier for dispersal of some species. We wondered whether that also applied to cowcod."

When NWFSC scientists and collaborators decided to explore whether cowcod are separated into one or more populations, they chose a tough task, but an important one. Resource managers can’t effectively manage and restore a population if they can’t identify it.

A key to managing severely depleted fishery stocks is identifying what populations are at risk. A population in this case is a group of individuals of a species living in a certain area that maintain some degree of reproductive isolation. The team published its findings, "Cryptic Population Structure in the Severely Depleted Cowcod," in the January issue of the Canadian Journal of Fisheries and Aquatic Sciences.

So how do you determine whether there’s more than one population off the West Coast when these fish have no visually identifiable characteristics that could separate them into groups? That’s where using genetic and otolith (ear bone) analysis tools can open doors to identifying discrete populations, if they exist.

To gather population information from otoliths, scientists use two different technologies: one is older, like counting tree rings under a microscope, the other is newer, using mass spectrometry to obtain microchemistry data. As Chittaro describes it, "One is age and growth information and the other is chemical information about the habitat uses and movements of individual fish."

He explained the bases of these two analyses as follows: "Fish are born with otoliths. They are always growing and gaining mass, adding increments like tree rings. Each added ring incorporates ions of elements from the water. Imagine the younger and the older cowcod in two different environments across time. The otolith will take up water every year, wherever the fish resides, and chemicals in rings of the bone will reflect the environment where the fish was during those points in the history of its life."

Analysis of microsatellite and mitochondrial DNA revealed as many as three genetically distinct cowcod lineages off the coast of California. In addition, otolith analyses demonstrated differences in water chemistry and growth rate associated with the geographic regions inhabited by these lineages. But deciding whether the stock structure observed in this study should be described as two or three lineages was a challenge.

For now, based on the evidence, the scientists decided to emphasize two major lineages. And since they could find no easy geographical separation thus far in their research, they suggest Point Conception as a useful proxy for the boundary until higher resolution sampling of these regions and further evaluation of temporal changes in the distribution of lineages can delineate a biologically more appropriate boundary.

So what’s the upshot? The results support managing cowcod as two separate populations. Chittaro said, "If fishery managers look at this and move forward with it, they’ll need quotas for each population. This should help improve efforts to rebuild these populations."