Young researcher captured image that will send envelopes across the nation. 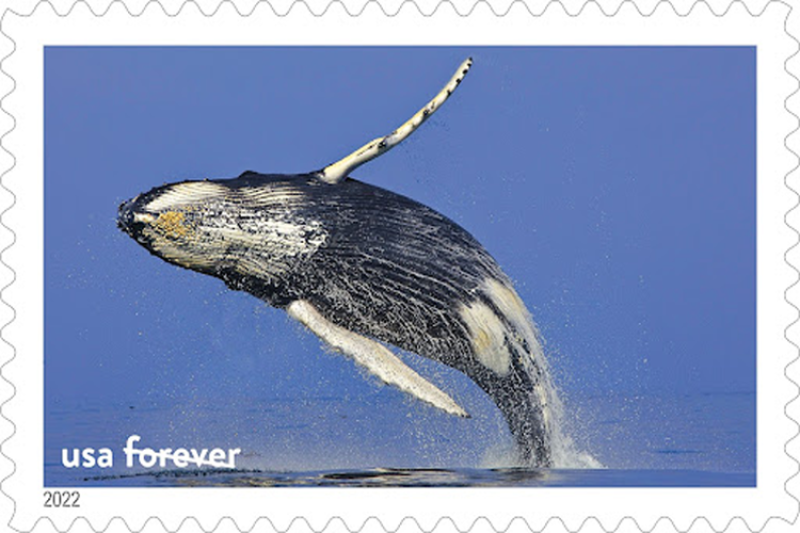 The U.S. Postal Service selected a photograph by NOAA Fisheries Research Scientist Elliott Hazen of the Southwest Fisheries Science Center for a new sheet of postage stamps celebrating our national marine sanctuaries. His photo became the stamp featuring a breaching humpback whale. This is the story behind the stamp as told by Elliot Hazen.

As a young graduate student, I was lucky to be introduced to the amazing and inspiring David Wiley. He heads the research program at Stellwagen Bank National Marine Sanctuary off the coast of Massachusetts. I was incredibly fortunate to spend the following six summers with Dave on Stellwagen Bank. I honed my skills as a field ecologist and studied the humpback whales and the food they depend on. Specifically, large aggregations of sand lance (Ammodytes sp.) create a seasonal buffet for humpback whales that rely on these fish and krill species offshore to put on weight for the winter. My project was to figure out when sand lance schools became energy-rich enough for hungry foraging whales, which was later published.

Stellwagen Bank National Marine Sanctuary is an amazing place. Research groups like the Provincetown Center for Coastal Studies know the identity and often the family tree of the whales that forage in the area, when they return to the sanctuary in a given season, and who they like to hang out with. We often saw whales like “Minnow,” who is featured in the stamp, returning year after year. I remember specifically watching a young adult whale learning how to bubble net feed for the first time alongside its mother, highlighting the generations of knowledge both in the whales and the researchers who study them.

We still do not know why whales decide to breach, but it’s an amazing opportunity to see the entirety of a whale’s body out of the water. It was even more amazing to be able to catch the event digitally as seen here in the stamp. Sometimes a whale will breach multiple times, while other times it’s a lone event. That makes it even harder to capture on film. For some reason, many of the whales seemed to breach as the sun started setting, both providing great lighting for photography but also a sort of goodbye to the day packed full of research. I still participate in similar research on whales here on the West Coast and prey in the Monterey Bay National Marine Sanctuary. I look forward to the day that I am able to visit the researchers and whales, such as “Minnow,” that frequent Stellwagen Bank National Marine Sanctuary again soon.