The Impacts of Ghost Nets on Coral Reefs

Researchers use structure from motion photogrammetry to measure the damage that lost or discarded fishing nets cause to coral reefs in the Northwestern Hawaiian Islands. 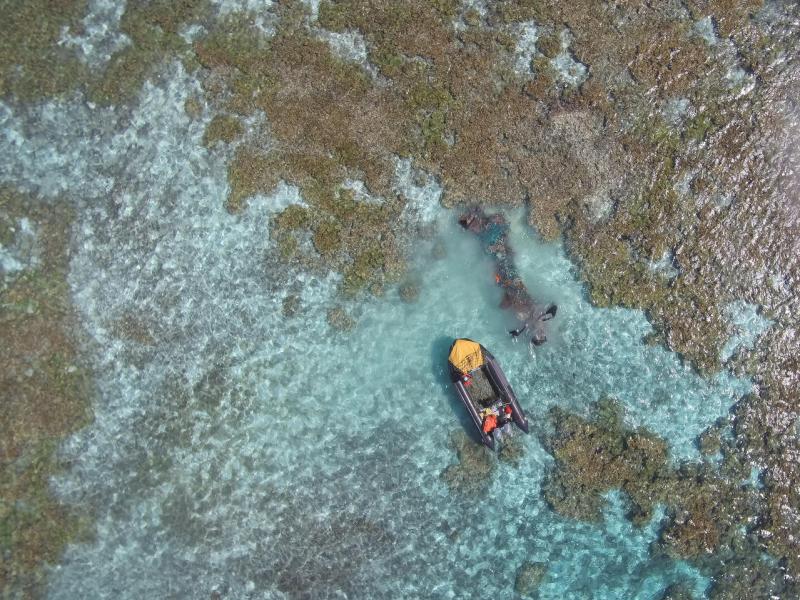 The marine debris team removing a large derelict fishing net from the reef at Pearl and Hermes Atoll. The impact area of the net can be seen as a pale patch on the coral reef in the upper right corner of the image. Photo: NOAA Fisheries/Steven Gnam.

Ghost nets are silently drifting through the Northwestern Hawaiian Islands, snagging on coral reefs and entangling wildlife. Scientists in the Pacific Islands have observed ghost nets tumbling across expansive coral reef environments. They break, shade, and abrade coral, preventing them from healthy growth. These lost or abandoned fishing nets are a persistent threat that accumulate over time, but we know little about the damage nets inflict upon corals.

In 2018, our marine debris team quantified the damaging effects of ghost nets on coral reefs of the Northwestern Hawaiian Islands for the first time. They found that regardless of net size or algae growth, corals were lost. They recently published their findings in Marine Pollution Bulletin.

The Northwestern Hawaiian Islands stretch for more than 1,243 miles northwest of the main Hawaiian Islands. They contain 124 mostly uninhabited small islands, atolls, reefs, and submerged banks. They are recognized as a UNESCO World Heritage Site and are encompassed by the Papahānaumokuākea Marine National Monument. Within these protected waters, far from human inhabitants, ghost nets are leaving their mark on reefs. But how much of an impact are these nets having on corals?

Our marine debris team has conducted 20 missions since 1996. They have removed 2,035,215 pounds of fishing nets and other marine debris from this sensitive coral reef ecosystem. “During these efforts, divers noticed that ghost nets accumulated on shallow reefs within the atoll lagoons, and noted significant damage to the coral after nets were removed,” says James Morioka, operations manager. In 2018, the team revisited Pearl and Hermes Atoll, which has the highest predicted annual net accumulation rates within the Northwestern Hawaiian Islands (61,460 lb). The team spent 10 days removing nets and used a novel application of photogrammetry called “structure from motion” (SfM), to measure how nets affect corals.

SfM creates a scaled, three-dimensional mosaic image from overlapping digital photographs. “We are using this technique to measure coral growth, mortality, and recruitment. This new technology not only allows us to capture an image of the reef in great detail but also provides three dimensional data about reef complexity and serves as a reference point for measuring coral recovery with future imagery,” explains Rhonda Suka, optical imagery data coordinator and lead researcher of the project.

By employing this technique at Pearl and Hermes Atoll, the divers were able to measure how much damage the derelict fishing nets had caused the corals. They also examined what changes the nets may have caused in the benthic (ocean floor) community. What they discovered is vitally important in the effort to ensure coral reefs can continue to thrive in this unique ecosystem.

They found sites with nets had significant less live coral and more bare substrate. These findings were not related to net size or the amount of algae growing on the nets (also called fouling). This suggests that nets of all sizes and conditions can harm the coral reef community.

Nets are accumulating in the Northwestern Hawaiian Islands at an estimated rate of 114,640 pounds per year. The nets are made of non-biodegradable plastics and only leave the ocean if they wash up on shore or are collected by humans. That is why we must continue removing nets within the monument to protect coral reefs.

This research shows that nets are associated with significant coral loss. This loss can greatly alter the dynamics within the reef community. Corals are a foundational species that provide essential shelter, spawning, nursery, breeding, and feeding grounds for numerous organisms. Revisiting these reefs to assess coral recovery will help us learn about the long-term impacts of ghost nets and increase our understanding of coral resilience.

If you would like to be a part of protecting this special place, visit our partner organization’s website, the Papahānaumokuākea Marine Debris Project.