Corals provide a refuge for fish, but can be injured by disturbances. A new five-year study reveals that one species of Alaskan coral can take 60 years to grow to full size - and may grow even more slowly in a warming ocean. 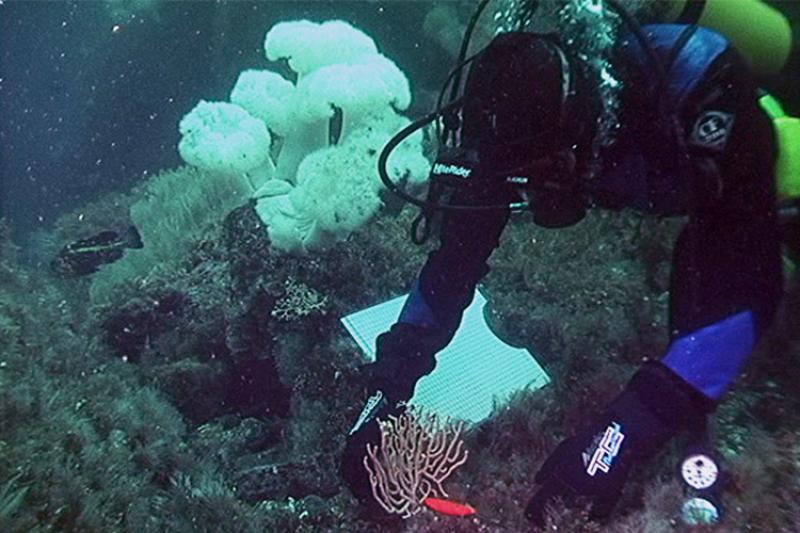 Managing fisheries means more than managing fish. To keep fisheries sustainable, managers need to make sure the ecosystems that support fish production stay healthy. An important part of Alaska’s marine ecosystems is the corals that create habitat for fish and their prey.

Coral gardens provide refuge for fish, but may be vulnerable to fishing gear and warmer temperatures. How long it takes for coral habitat to recover from injury depends on how fast corals grow and reproduce.

A new study led by Bob Stone of NOAA Fisheries’ Alaska Fisheries Science Center reveals just how slowly some corals grow, and provides insight on how they might respond to seafloor disturbance and ocean warming.

How the Garden Grows

Watching coral grow may sound like restful work. Not the way Stone does it.

Every year for five years, Stone’s team traveled to remote areas of Southeast Alaska and dove into frigid waters to observe corals in their natural environment.

“Several of the dive sites were very remote, so just getting there was quite a challenge,” says Stone. “Sometimes we enjoyed the comfort of the NOAA ship John N. Cobb, but other times we had to take a small (26 foot) boat over 80 miles to the sites. Occasionally we had to use float planes.”

Often the last 25 meters of the trip was the biggest challenge.

“Diving conditions were quite unpredictable,” Stone explains. “We needed to work during the same time every year, but you never know what you are going to get for weather or dive visibility.”

Once they made it to the seafloor, the most exciting part of the work began: “finding the coral colonies from year to year. Just think, small coral colonies with little tags at the bottom of the ocean in a remote place. You find one and your heart starts beating fast.”

To monitor the environmental conditions experienced by the corals, the team deployed temperature loggers and current meters at each study site.

They tagged a total of 93 healthy coral colonies at three locations. Each year they video recorded each of these colonies against a centimeter measuring grid. Later, in the laboratory, they analyzed the video using computer image analysis to measure the length of colony branches to the millimeter.

Stone’s team found that the corals grew an average of 6 millimeters, less than a quarter of an inch, a year. At that rate, it would take 60 years to grow to maximum size. That’s important because fully grown coral makes the best habitat for fish.

“We were surprised that these particular corals grow so slowly - slower than any other species we have looked at in the north Pacific Ocean,” Stone says.

Injured colonies, especially those chronically injured in areas of frequent disturbance, grew more slowly. Those in warmer ocean conditions also had reduced growth. That double whammy could affect the ability of corals to recover from disturbance if ocean warming continues.

The shallow water populations that Stone observed are not at risk from disturbance by commercial fisheries, but deeper (greater than 80 meters) colonies of the same species are periodically disturbed in some regions. Most Alaska corals are found only in very deep waters. The species Stone studied lives at depths of 15-512 meters in Alaska and Canadian waters. Because its shallower depth range is accessible to scuba divers, it provides a rare opportunity to learn about coral growth rates.

Right now, damage to this species from trawls is low (3 percent) and there is no evidence of damage from long line fishing. Stone’s study gives fisheries managers information they need to protect this important resource in the future. Stone explains:

“We know that corals provide important habitat for some species of managed fish and crabs, and we know that in some places in Alaska there are interactions between fishing gears and coral habitat. Better management of both resources is possible by knowing the recovery rates of the coral habitat. This study demonstrated that not all corals in Alaska grow at the same rates, and we need to consider this in our management strategies."