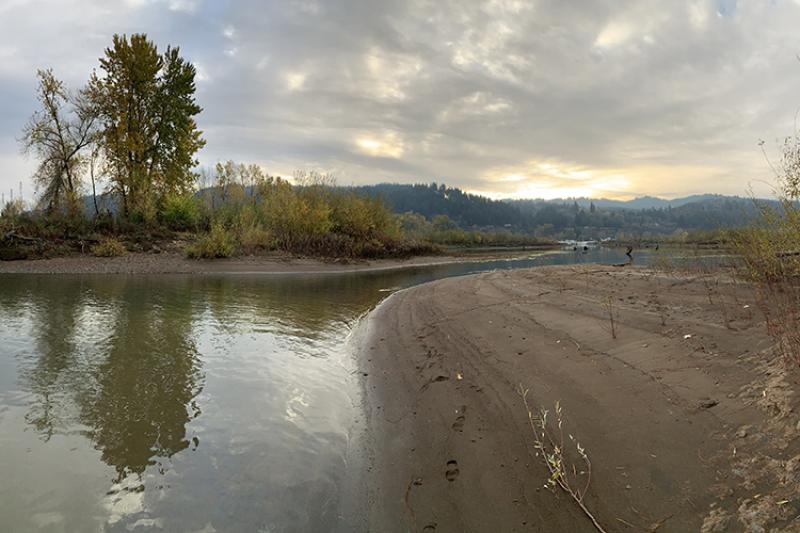 Though much of Oregon’s Willamette River is scenic and lined with tall evergreens, its final 11 miles are mostly industrial and have long been blighted by pollution. Since the early 1900s, hazardous waste from industry has negatively impacted habitats, fish, and wildlife. In 2000, the U.S. Environmental Protection Agency designated the area as the Portland Harbor Superfund Site.

To restore habitat after pollution, NOAA and its federal, state, and tribal partners are working together to restore this reach of the Willamette River. They are using an innovative mechanism known as restoration banking.

The first such banks were established in the early 1980s to mitigate development impacts on wetlands. The practice gained momentum over the last four decades, branching out into banks that help make up for hazardous waste and oil pollution on other types of habitat. Restoration banking projects also tend to be larger in size, which lead to greater ecological benefits and diversity of habitat. Restoration banks create more benefits to the environment than multiple smaller projects would create.

The Alder Creek project was the Portland Harbor Superfund Site’s first restoration banking project. Wildlands constructed the 52-acre site in 2014 and 2015. The project restored wetlands and reshaped riverbanks to allow water to flow into new habitats for fish and wildlife. Juvenile salmon moved into the area shortly after construction was finished.

Next, the company RestorCap constructed a third restoration bank—the Linnton Mill restoration project. This project removed an old mill, dilapidated buildings, pilings, and a dock to provide high-quality habitat for many of the same species as the other projects. The project also includes a short walking trail and observation area with a view of the Willamette River. The project wrapped up construction in 2019.

Lastly, in 2020, Portland General Electric constructed the 53-acre Harborton Wetlands project. This project created a new channel on the site, featuring many large woody habitat structures and a diversity of native plants in the floodplain. The project also preserved and enhanced existing wetland areas used by northern red-legged frogs and other wildlife.

The Portland Harbor Natural Resource Trustee Council has worked closely with partners to maximize the ecological benefits to Portland Harbor’s injured resources. Restoration banking has been a powerful strategy to get restoration activities underway sooner than they would normally occur.

Last updated by Office of Habitat Conservation on August 04, 2022