Feeding rates of blue mussels slow down under ocean acidification conditions, and the cause may be the slowing beat of gill cilia, similar to a known response in human lung cells. 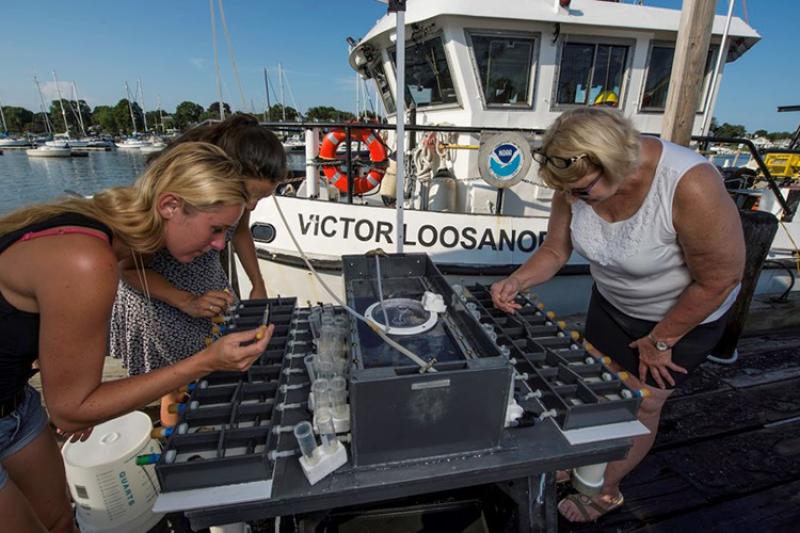 Shannon Meseck, a NOAA Fisheries research chemist and marathon runner, was initially interested in how ultra-runners can tolerate higher levels of carbon dioxide than non-athletes. A chance conversation with a medical doctor about ciliated cells in the human lung made a light bulb go off. Could similarities between the function of these cells in humans and in blue mussels explain the mussels’ response to increasing acidification in the ocean?

Blue mussels, one of the mollusks Meseck studies, are economically and environmentally important filter-feeding bivalves. Like other bivalves, they use their gills to feed and respire. Gill cilia—microscopic, hair-like structures—create and control the current that allows water and food to flow over the gills. The cilia also help capture and sort food particles.

Similar ciliated cells in the human lung have receptors that sense the environment, including carbon dioxide concentration. They signal responses that can include changes in cilia beat frequency. Ultra-runners’ lungs are very efficient at this. They can tolerate higher levels of carbon dioxide in the body than non-athletes, and don’t get “winded” as quickly or for as long.

What if, thought Meseck, the increased carbon dioxide characteristic of ocean acidification also inhibited shellfish cilia? Feeding and respiration would also be inhibited. This "what if" question led to a study conducted by the NOAA Northeast Fisheries Science Center’s laboratory in Milford, Connecticut.

This study may be the first to show that shellfish gill cilia slow down with increasing dissolved carbon dioxide. The results confirm that elevated carbon dioxide concentration reduces feeding rates of blue mussels. Further, the researchers found evidence that slowing the cilia beat frequency—how often they twitch and move water—causes these decreased feeding rates. This is similar to what can happen in human lungs. These findings are important to understanding how ocean acidification affects shellfish and marine ecosystems. The study appeared in Ecological Indicators.

What Happens to Mussels When There's Too Much Carbon Dioxide?

Reduced feeding and filtration have important implications for energy and growth in blue mussels, as well as ecosystem level effects. “Bivalve filtration is an ecosystem service, and we must better understand how ocean acidification may be affecting that,” said Meseck.

As atmospheric carbon dioxide concentration increases, the ocean is absorbing approximately 30 percent of it, making the water more acidic. In the Northeastern United States, dissolved carbon dioxide in seawater increased 2.5 percent from 2007 to 2015.

Researchers measured the feeding rates of mussels in low and high carbon dioxide conditions in a field experiment in Milford Harbor. They used a biodeposition method previously developed by Milford researchers. For comparison, a similar experiment was conducted in the laboratory, exposing blue mussels to two different carbon dioxide concentrations using an experimental delivery system.

In both the field and laboratory experiments, the volume of water that the mussels filtered over time was lower at higher carbon dioxide levels and higher at lower levels. Mussels in the higher carbon dioxide conditions had significantly lower filtration rates and efficiency in selecting food particles.

Laboratory Technician Melissa Krisak explained, “It is amazing how often you find great tools from the medical community to help answer questions about marine animals.”

The study was funded by the NOAA Office of Aquaculture and NOAA Ocean Acidification Program.