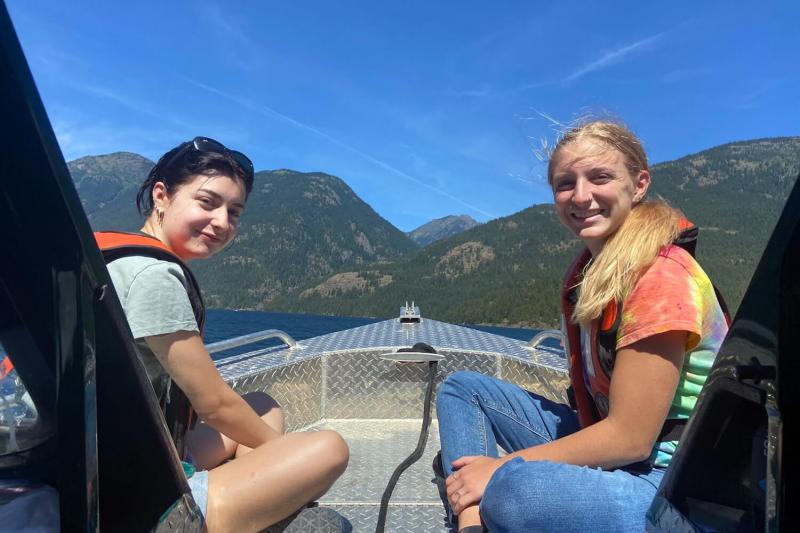 Alexa Haucke and Jenna Callan interned with the Protected Resources Division of NOAA Fisheries’ West Coast Region under the Hollings Preparation Program. They are both University of Washington students. Jenna is a rising second-year undergraduate and Alexa will begin her first year after completing Running Start in high school. Here they describe their summer experience.

Through our internship, we worked with NOAA Fisheries and Seattle City Light on the Skagit River Hydroelectric Relicensing Project. It’s a multi-year project to reauthorize operations of the three Skagit River dams: Gorge Dam, Diablo Dam, and Ross Dam. We gained an understanding of how dams can affect Chinook salmon that spawn and rear in the Skagit River. We even did a site visit to tour the dams and learn about research on the reservoirs. The main focus of our project was to understand how changes in the abundance of threatened Skagit-origin Chinook salmon may affect endangered Southern Resident killer whales. These species are unequivocally connected, as Chinook salmon is the main food source for the Southern Residents.

My main project was compiling information to support an analysis of the effects of the Skagit River dams on Chinook salmon and Southern Resident killer whales. I evaluated how various factors, now under study, could affect Chinook salmon populations, such as:

I also researched potential effects of dams that are not currently being evaluated, such as rearing habitat limitations and the potential premature sexual maturation of Chinook salmon. My work will support NOAA Fisheries and Seattle City Light as they begin to evaluate if and how the Skagit River dams affect Southern Residents through impacts to their primary prey source, Chinook salmon.

Throughout the internship, I enjoyed learning more about policies such as those involved in the dam relicensing. I also enjoyed working with people from different departments and agencies, as we had mentors within both NOAA Fisheries and Seattle City Light. I gained a greater understanding of how agencies work together to accomplish their goals and the complexity of processes involved in government policy.

I thoroughly enjoyed diving into NOAA Fisheries’ extensive collection of data and speaking with the vast array of experts working on the Skagit River project. It was inspiring to see so many different agencies come together on one project. I improved my communication and analytical skills through collaboration with mentors and colleagues at NOAA Fisheries, Seattle City Light, and connected agencies. I hope to continue exercising these skills throughout my career.