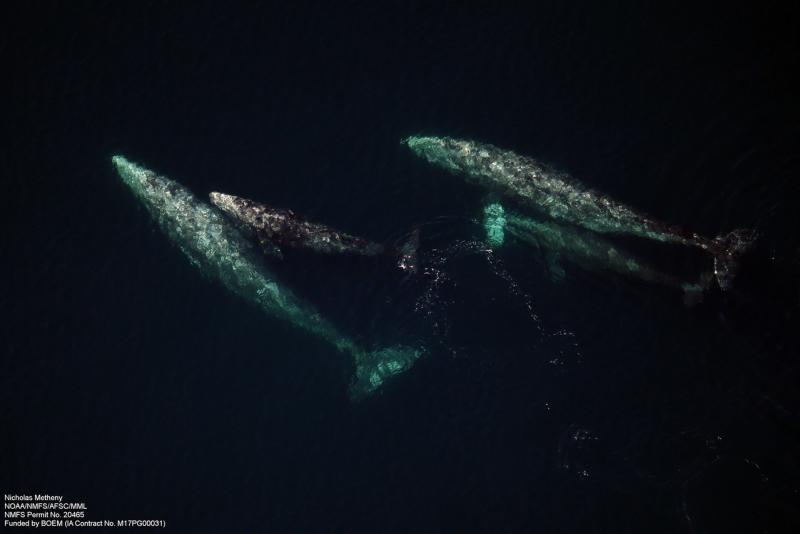 In May 2019, NOAA Fisheries declared the elevated gray whale strandings an Unusual Mortality Event (UME), which supported the international scientific response and investigation into the cause. In 2019, a total of 123 gray whales stranded dead in the United States, including Alaska. Another 81 strandings were reported in Mexico and 11 in Canada.

Scientists at a NOAA Fisheries field station at Granite Canyon on the coast of Central California are now counting the southbound whales as part of a regular survey to assess their abundance. The survey will provide some of the first population-level data on the whales since the UME was declared, said Dave Weller, a research biologist at the agency’s Southwest Fisheries Science Center in La Jolla, Calif., who is leading the effort. 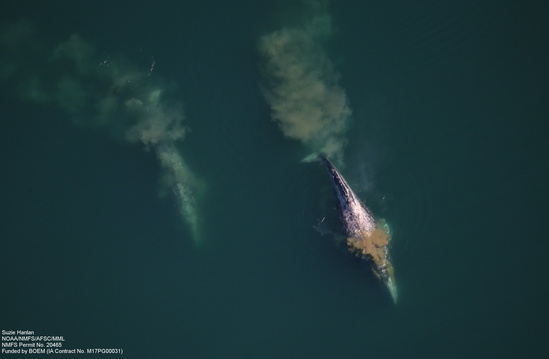 Gray whales scoop up and sift through mouthfuls of sea-bottom sediments for food, trailing plumes of mud behind them. Credit: ASAMM/Alaska Fisheries Science Center, funded by BOEM IAA No. M11PG00033.

Gray whales undertake one of the longest migrations on Earth. Every year they travel between feeding grounds in the Arctic and the warmer waters of Mexico where they spend the winter and rear calves. Researchers do not expect to see many strandings during the ongoing southbound migration because the whales have just finished the summer feeding in the Arctic.

“This is the time when they should be in about the best shape,” said Deborah Fauquier, veterinary medical officer in NOAA Fisheries’ Office of Protected Resources who is also coordinating the international investigation into the UME. “Some of the gray whales that died earlier were extremely thin and malnourished, so we are looking for any signs of poor body condition to indicate the animals are still under nutritional stress.”

The northbound migration in spring is a greater endurance test for the whales because they feed very little during the migration or the winter in Mexico. They may exhaust what’s left of their energy reserves on the way back to the Arctic to feed.

One of the first hints of a problem came last winter in Mexico, where researchers reported an unusual number of thin whales. Their observations this winter will help tell if that is still the case, and may offer hints of how long the UME is likely to continue. Researchers from Mexico and Canada are partnering with NOAA Fisheries on the investigation.

Scientists suspect that many of the whales that stranded dead last spring had started out from Mexico with unusually diminished reserves. 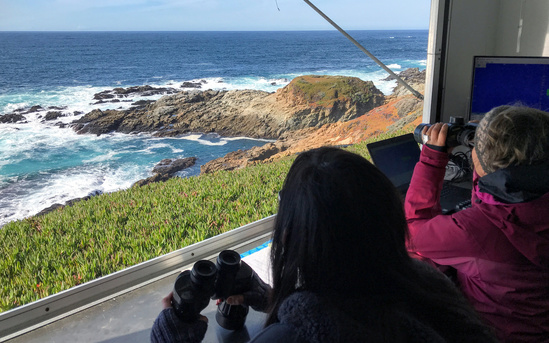 A team from NOAA Fisheries’ Southwest Fisheries Science Center watches for gray whales migrating south from the Arctic to Mexico from an observing station at Granite Canyon, on the central California Coast. Credit: NOAA Fisheries/SWFSC.

The 2019 UME represents the most gray whale strandings in a single year since 2000. That year, a similar increase in strandings that started in 1999 also led NOAA Fisheries to declare an UME. An investigation of that UME could not identify a definitive cause, although some of the stranded whales were also underweight. The 1999-2000 UME documented 651 dead gray whales. The total number of animals was estimated to be much higher since not every carcass can be detected, especially if they sink or are scavenged.

That earlier UME lasted close to two years, with numerous strandings during their northbound migration in both 1999 and 2000. If the current UME follows the same pattern, strandings in the United States are likely again this coming spring, Fauquier said.

To investigate the current UME, scientists have formed teams to examine the strandings from different angles. One team is looking at environmental and oceanographic changes. Another is considering population dynamics such as whether the gray whale numbers have reached the carrying capacity of the environment.

The Eastern North Pacific gray whale population that migrates along the West Coast is fully recovered from the whaling era. In 2016 it was estimated at about 27,000 whales. That may be close to what the environment can sustain, said John Calambokidis, a research biologist at Cascadia Research Collective in Olympia, Washington, who is assisting in the investigation.

“Since this matches or possibly even exceeds the numbers thought to exist before commercial whaling, the whale population may be at the limits of the normal environmental carrying capacity,” he said. “This may also be playing a role in the mortalities.”

Process of Elimination to Identify Cause

Researchers met in November to review the condition of the whales stranded so far during the current UME. They found that about 35 percent examined were in poor to thin nutritional condition, Fauquier said. Identifying a cause of the strandings is in part a process of elimination as researchers look for evidence of trauma, disease, toxins, or other contributing factors that if lacking, can be ruled out, she said.

Gray whales often feed by using suction to pull prey up from the sea floor and filtering small organisms from the water into their mouths. 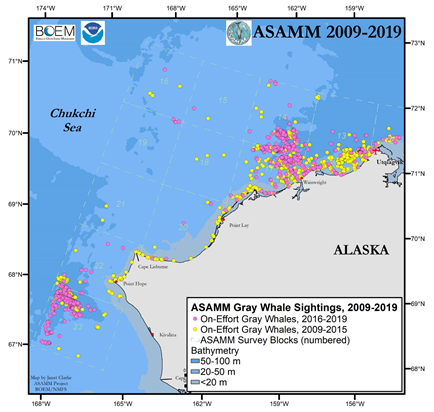 Sightings of gray whales in the Chukchi Sea off the coast of Alaska. Gray whale distribution and density has shifted since 2015, with fewer whales feeding along the coast between Point Hope and Wainwright. Biologists are examining reasons for the change. Credit: ASAMM/Alaska Fisheries Science Center, funded by BOEM IAA No. M11PG00033.

“Last summer, researchers in the Arctic found gray whales feeding as they typically do in the Chukchi Sea off the north coast of Alaska,” said Sue Moore, a University of Washington oceanographer who is leading the science team investigating ecosystem changes. She explained that gray whales can feed on many different organisms, making it unlikely that a shortage of food alone is to blame.

However, animals weakened by lack of food may be more vulnerable to other risks, such as ship strike, entanglement, or disease.

A big difference between the gray whale UME two decades ago and the one currently underway is that researchers are much better positioned to respond to stranded whales and conduct examinations, according to Fauquier. The West Coast and Alaska Marine Mammal Stranding Networks have guidance on how to respond to strandings and what information to gather. The networks, along with researchers in Canada and Mexico, are now better equipped, and more highly trained than 20 years ago.

“We have so much more data this time that should help us answer questions,” Fauquier said. “We rely heavily on the stranding network members for help, and they’ve been doing an incredible job responding to the strandings and collecting invaluable information that’s helping the investigation team evaluate the mortalities.”

Last updated by Office of Communications on June 27, 2022