It Takes a Community 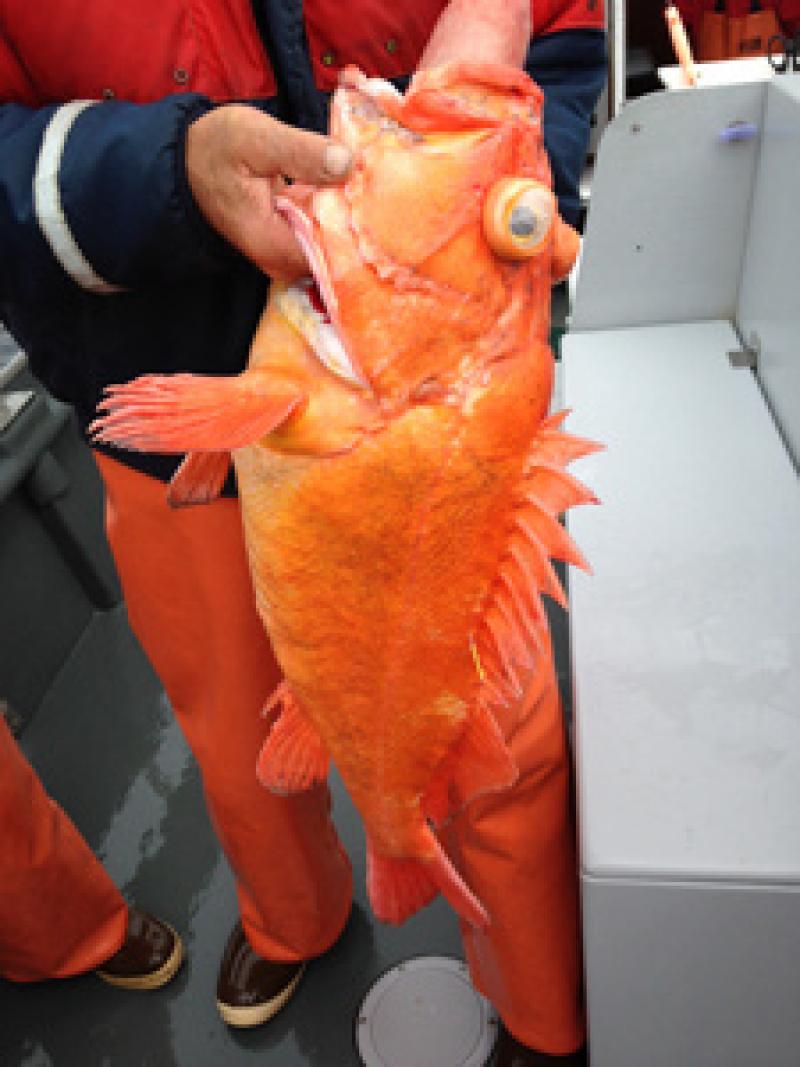 Rockfish are susceptible to barotrauma when brought to the surface, with symptoms including "pop–eye". Photo: NOAA Fisheries

Rockfish don't put up a fight like Chinook salmon (Oncorhynchus tshawytscha), so what's the allure of catching them? Quite simply, they're tasty. Randy Jones, a charter boat captain from Bremerton, remembers being about 10-years old when his dad was a commercial fisherman off Westport on the Washington coast, where the catch included yelloweye rockfish.

"They taste really good," he said. "I'd take a rockfish over salmon any day of the week."

For Ray Frederick, a recreational fisherman near Silverdale with more than 70 years of experience, rockfish were an incidental catch decades ago. "I considered myself lucky if I caught a rockfish and brought it home, because they're really good eating," he said. "I prefer salmon, but my wife likes rockfish better."

But these tasty populations have been in decline in Puget Sound for decades, in large part due to the species' late maturation. Yelloweye rockfish (Sebastes ruberrimus)—aka red snapper or rockcod—can live for more than 100 years and canary rockfish (Sebastes pinniger) for more than 75 years. Both species take more than a decade to mature and reproduce. This means that mature individuals taken by fisheries reduce reproductive potential and juveniles don't mature fast enough to replace them.

After decades of commercial and recreational fishing on these species, decreases in catch were observed in the 1980s and the state began to impose catch limits. Some species, however, continued a dramatic decline in numbers, and in 2010 Puget Sound/Georgia Basin yelloweye and canary rockfish were listed as threatened under the U.S. Endangered Species Act (ESA) and bocaccio (Sebastes paucispinis) was listed as endangered.

Scientists team up with anglers

Now that these depleted populations are protected, NOAA Fisheries is working to restore them. An important goal for managing recovery is to identify genetic differences between these rockfish populations in Puget Sound and those on the outer coast to better define the boundaries of the distinct population segment (DPS), which is the smallest division of a species that can be listed under the Endangered Species Act.

That task fell to biologist Kelly Andrews and fellow researchers at NOAA Fisheries' Northwest Fisheries Science Center (NWFSC) and the Washington Department of Fish & Wildlife. They decided to partner with experienced recreational charter boat captains and expert anglers who used to catch these elusive bottomfish. Even if it won't happen in their lifetime, many of these anglers want a sustainable fishery for their children, the next generation of anglers. That's how the rockfish research voyages of several charter boat captains, including Randy Jones and anglers such as Ray Frederick, were born.

As Andrews explained, "The very low abundance of these rockfish species makes cooperation with experienced local anglers the key to successful sample collection. Teaming up with them allows us to fish historical hotspots with methods and gear that were successful in the past."

Andrews believes this research will be of great interest to anglers, because genetic information can inform fisheries management and the recovery of the species over time, which can impact economic activities related to charter and recreational fishing. The sampling could also point to the key answers about the populations themselves. Genetic diversity is one of the keys of healthy populations, and understanding how closely related these fish are could help determine that.

After obtaining NOAA research permits to catch members of a protected species, and several spring shake-down cruises off the San Juan Islands and Whidbey Island to test methods, the team sampled selected locations. "We had nine captains available for fishing days," Andrews said. Most of the charter boats are in the 25 to 35 foot range and can hold six passengers, but he said most captains want three or four anglers fishing at a time. They fished mostly below 150 feet for adults of these species. Canary and bocaccio depth ranges vary, but yelloweye are typically deep, with most being caught below 250 feet.

Jay Field, a charter operator from Anacortes and an experienced fisherman, also signed up his boat to be part of the research. As captain, he enjoys "putting the puzzle together, looking for certain structure and depths, a certain period in the tide" at a given hotspot. "Rockfish need a softer tide set," he observed. "Too much current doesn't work."

But he also couldn't resist the chance to do a little "rockfishing" again when the opportunity arose. "I'm a tried and true Chinook salmon fisherman," Field said, "but I caught plenty of rockfish in the past." He said the bottom is "snaggy and grabby," which runs the risk of losing some expensive gear, "but if you're not fishing at the bottom, you're not fishing where they live." He also noted that "Everybody does things a bit different. I fish more bait than hardware." Evidently his technique works for him, as he caught several yelloweye, one about 17 pounds, over two feet long, and potentially 100 years old.

The sampling is designed to be nonlethal. Scientists note the gender, measure total length and weight, cut a small piece of caudal fin for a genetic sample, then release the fish. While fishing at these depths can cause physical stress due to rapid changes in barometric pressure while being reeled to the surface, rapid recompression to captured depths may alleviate external signs of barotrauma.

Immediately after data collection, the researchers clip the mouth of the fish to a pressure–activated descending device called a SeaQualizer, which quickly takes the specimen down to the appropriate depth for release. However, more research is currently being conducted to determine long–term survival after decompression. Even if fish do not resurface they may have injuries that later lead to death.

"The rockfish's swim bladder expands like a balloon on the way up," Andrews explained, "and the fish doesn't have the strength to get back down. Bottomfish can't adjust to pressure changes as quickly as fish that spend a lot of time going up and down, but as the individual goes down on the SeaQualizer, the air compresses again in its swim bladder. Once down at the depth of capture, the rockfish can self–regulate again."

The caudal fin samples were collected from the fish and brought to the NWFSC laboratory in Seattle for genetic analysis. By comparing the genetic profiles of rockfish caught in Puget Sound with those on the outer coast, we can better understand the level of difference between these populations. Collecting samples from several regions of Puget Sound and the surrounding areas allowed us to identify geographically where differences in these populations occur.

Findings from the genetic analysis will now serve to better inform spatial management boundaries and recovery actions for these species. NOAA Fisheries continually integrates the best available science into management, and the new genetics information has led to a proposal to delist the canary rockfish DPS of Puget Sound and the Georgia Basin from the Federal List of Threatened and Endangered Species. This is because policy dictates that to be named a DPS, a population must be "discrete" or distinct from other populations making up the species, and we now know that canary rockfish in Puget Sound and the Georgia Basin do not meet that criteria. When the species was listed in 2010, this information did not exist, so the determination was made based on information from other rockfish species and environmental information. The new information obtained about yelloweye rockfish will be used to inform the recovery process.

While the NWFSC scientists and their community partners are out on the water, and the geneticists are running DNA sequences, Jennifer Sawchuk, a marine ecologist in the NOAA Fisheries Protected Resources Division, is working with a team of experts from various organizations to draft the rockfish recovery plan for yelloweye rockfish and bocaccio. Just as the scientists have been working with the recreational fishing community, such partnerships are integral to recovery planning efforts.

Previously as a University of Washington graduate student, in 2011 she interviewed more than 500 anglers in Puget Sound to gain an understanding of their knowledge about rockfish, perceptions of threats to rockfish, fishing practices, and preferences for recovery measures. The results of her study have informed NOAA's outreach and education efforts around rockfish, as well as understanding how to better utilize angler's knowledge about marine resources.

"We've done several projects over the years that involve experts and the public in recovering listed rockfish, and much of that work has been with the regional fishing community," Sawchuk said.

"We recognize that fishers can offer a lot of experience and expertise, and their support is important. To recover threatened and endangered species, it's just as important to understand stakeholders as it is to understand the species themselves. Our hope is to continue working with fishers and other groups in the future – recovering these rockfish species will take the dedication of a lot of people from all over Puget Sound and we need their help."

NOAA Fisheries expects to publish a draft recovery plan for Puget Sound yelloweye rockfish and bocaccio later in 2016 and will be asking the public for comments. "We are hopeful that we will get comments from a wide range of people on the many aspects we lay out in our roadmap for listed rockfish recovery," said Sawchuk.

Like a lot of other species in Puget Sound, there are numerous factors that affect these long-lived fishes. The plan will outline additional research needs to better understand and protect listed rockfish as well as address the wide range of threats to these rockfish and their habitats.

"This is a comprehensive plan that we hope will involve many interested groups and people who call Puget Sound home. It's been encouraging to see a growing understanding from partners like the charter boat captains and anglers who helped with the genetics study that the specific actions we can take to recover these rockfish aren't just good for rockfish – they are good for the salmon that eat juvenile rockfish and the killer whales that eat the salmon. And they are also good for people who recreate in or eat anything that comes from Puget Sound," said Sawchuk.

(This story was originally published in 2014 and has been updated to include results of the genetics study and the subsequent proposed management changes.)