Our hope was to give this animal every chance to be wild and live safely in her home—intervention is a last resort. 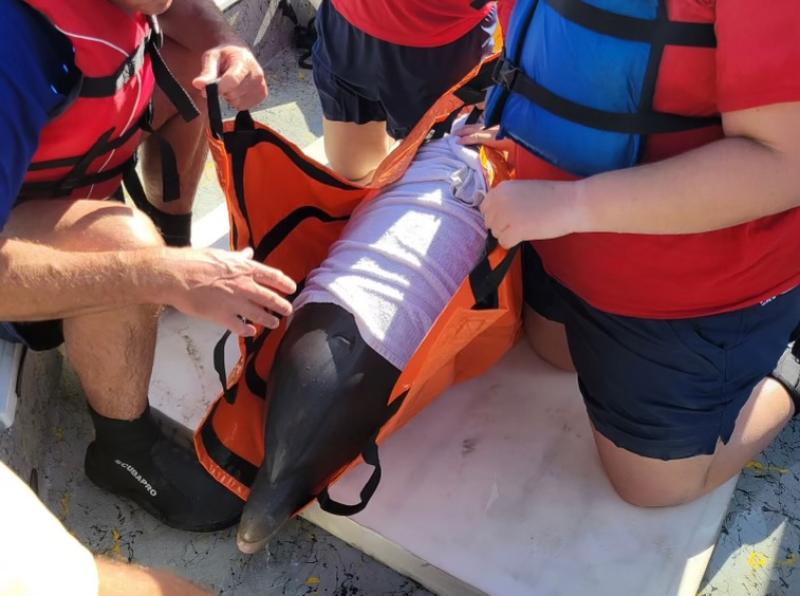 The story of a dolphin we now know as “Izzy” continues with news of the search for her forever home. She was  brought in for medical treatment at the end of June. NOAA and outside experts from organizations across the United States, including veterinarians and dolphin biologists, reviewed her case. She had a serious eye injury, a lack of socialization with other dolphins, and her body condition was poor at the time of rescue. She also had strong habituation to humans and vessels—dangerous behaviors that would likely continue if released. It was the experts’ opinion that she would be unable to survive in the wild and would be at high risk for serious, life-threatening injury.  NOAA determined that it is not in Izzy’s best interest to be released back into the wild.

Izzy was isolated in a series of canals off North Padre Island, Texas from a young age. She was monitored by NOAA Fisheries and the Texas Marine Mammal Stranding Network over the 2 years prior to her rescue. Unfortunately, her habituation to people and boats increased over those years. Our hope was to give Izzy every chance to be wild and live safely in her home—intervention, treatment, and long-term care were a last resort.  We can’t stress enough how important it is to let wild dolphins be wild. Please give them space and never feed or swim with them.

After initial stabilization at Texas State Aquarium and nearly a month of intensive care at the Texas Marine Mammal Stranding Network, Izzy became stronger and more active. She was moved to a deeper and larger pool at SeaWorld San Antonio where she continues to receive treatment.  She will remain there until NOAA identifies a permanent home for her outside of SeaWorld, based on her particular social and medical needs.

Dolphins are protected federally under the Marine Mammal Protection Act. The Act provides for both civil and criminal penalties for harassing, feeding, or disturbing the animal.

If you see an injured, stranded, or dead marine mammal, do not intervene. Call trained responders at (877) WHALE-HELP. Please remain at a safe distance and, if conditions allow,  take photos to share with biologists to help them evaluate the situation and respond quickly

NOAA partners—the Texas Marine Mammal Stranding Network, Texas State Aquarium, and SeaWorld San Antonio—rescued a habituated dolphin with injuries off North Padre Island, Texas. According to biologists, the animal’s health is declining and she needs medical attention. Without proper medical attention, and possible treatment, the dolphin could die. Our hope was to give this animal every chance to be wild and live safely in her home—intervention was a last resort.

If you see a stranded or dead marine mammal, do not intervene. Call trained responders at (877) WHALE-HELP. Please remain at a safe distance and, if conditions allow,  take photos to share with biologists once they arrive on scene.

The situation for a habituated dolphin off North Padre Island, Texas is dire, threatening both human safety and the animal’s life. Biologists report the animal is showing more aggressive behavior, separating children from their parents in the water, and isolating swimming pets from their owners.

Human interaction is to blame for the dolphin’s increasingly aggressive behavior. For more than a year, biologists, law enforcement, and residents of the area have discouraged people from feeding, swimming, or interacting with the dolphin. While some have heeded the warnings, others continue to seek out the animal.

The dolphin has become so used to humans that it now seeks out people, boats, and any form of interaction. In addition to the concerns for human safety, the dolphin has wounds caused by boats and there are concerns for the dolphin’s safety with increased watercraft activity over the upcoming holiday weekend.

What to Do If You See the Dolphin

We are asking the public to avoid seeking out the dolphin. Leave it alone for your own safety and that of the dolphin. However, if you see the dolphin, it is likely to come close to your boat. The best thing to do is avoid stopping, and slowly move away by maintaining your course and speed. Keep your hands and feet inside the boat, and do not reach over to try to touch or pet the dolphin. It will eventually leave the side of your boat once you’ve moved out of its area. If you are swimming and see the dolphin, leave the water as quickly as possible to avoid any potential interactions.

While the dolphin may seem friendly, this is a wild animal with unpredictable behavior. It is showing behaviors similar to other lone, sociable dolphins worldwide. Research documents four stages of a lone dolphin becoming sociable and conditioned to people.

The dolphin first shows up in the area and follows people but doesn’t approach them.

The dolphin starts following boats and people, and people start to feed, play, swim with, or otherwise interact with it.

The dolphin is now familiar with people, has lost its natural wariness to people and boats, and allows social interactions with people.

The last stage, this is when the dolphin is now widely known, often with media attention. It becomes a tourist attraction with people coming to see and inappropriately interact with the dolphin. This can cause the dolphin to show dangerous behaviors toward people, including dominant and aggressive behaviors. The North Padre dolphin is in stage 4.

NOAA and biologists are working to determine what can be done to protect this dolphin. The experts will consider whether there are options to mitigate this unfortunate situation. Law enforcement plans to increase patrols going into the holiday weekend. Any interaction with the dolphin that may injure or change its behaviors is harassment and illegal under the Marine Mammal Protection Act. Feeding or attempting to feed wild dolphins is also illegal. Please report any violations to NOAA’s Enforcement Hotline (800) 853-1964. Violations can be prosecuted either civilly or criminally and are punishable by up to $100,000 in fines and up to 1 year in jail per violation.

In response to continued incidents of inappropriate and illegal interactions with this dolphin, Texas Parks and Wildlife and NOAA Office of Law Enforcement personnel plan to increase their patrols of the area and to prioritize their investigations of people interacting with the dolphin. Dolphins are protected federally under the Marine Mammal Protection Act. The act provides for both civil and criminal penalties for illegal “takes,” a term that includes harassing, feeding, or disturbing the animal. Potential penalties include fines of up to $100,000 and imprisonment for up to one year per violation. In order to avoid inadvertently violating the law, NOAA Fisheries recommends maintaining a minimum of 50 yards of separation between people and dolphins and refraining from interacting with the animals in any way.

A lone dolphin, first spotted in March of last year, is staying in canals adjacent to a nearby neighborhood in North Padre Island. Over the past year the public has become more and more interested in the animal—even showing up to swim with, ride, jump on, and pet the dolphin. They are sharing their experiences and interactions via social media, encouraging others to go out and interact with the animal as well. These actions could be dangerous—even fatal—for the dolphin.

So why don’t biologists move the animal? Research shows that relocating a wild dolphin is not a favorable option for the dolphin’s survival and is not likely to solve the problem. This is especially true when people have taught the dolphin to associate with them by feeding and interacting with it. This area is now the dolphin’s home. If moved, it would either return to the area or move the same problem behaviors to another area, decreasing its chances of survival. Instead, biologists explain, we must change human behavior, not the dolphin’s behavior or its home.

Biologists ask that you not seek out and interact with the dolphin, but rather give it space. If you do encounter it, view from a safe distance. While experts understand the enthusiasm and interest in seeing wildlife up close, encouraging this dolphin to engage with people is very dangerous for its survival in the wild.

Avoid seeking out the dolphin and, if you encounter it, don't interact with it in any way—allow the dolphin to be wild. Human interactions cause animals to lose their wariness of people and boats, leading to boat strikes, and entanglement in or ingestion of fishing gear. In fact, this dolphin was recently observed with wounds consistent with a propeller injury along its left side.

The Texas Marine Mammal Stranding Network is consulting with NOAA Fisheries and marine mammal veterinary experts. They are monitoring the dolphin to determine the extent of this injury. However, it is clear that the dolphin is already in danger from the human interactions that are occurring.

Harassing and Feeding Dolphins Is Illegal

Dolphins are protected federally under the Marine Mammal Protection Act. The MMPA provides for both civil and criminal penalties for illegal “takes,” a term that includes harassing, feeding, or disturbing marine mammals in the wild.  Potential penalties include fines of up to $100,000 and imprisonment for up to one year per violation.

In order to avoid inadvertently violating the law and in order to protect these vulnerable animals, NOAA Fisheries recommends maintaining a minimum of 50 yards of separation between people and dolphins and refraining from interacting with the animals in any way. If you see potential violations, please report them to the enforcement hotline at (800) 853-1964.

Experts say loving them from afar is the best way to insure a dolphin's ability to thrive and live a full life. If you see an injured or dead marine mammal, please don’t take matters into your own hands. Call trained responders at (877) WHALE-HELP, keep a safe distance, and take photos if possible.