A new genetic analysis of Southern Resident killer whales found that two male whales fathered more than half of the calves born since 1990 that scientists have samples from, a sign of inbreeding in the small killer whale population that frequents Washington’s Salish Sea and Puget Sound. 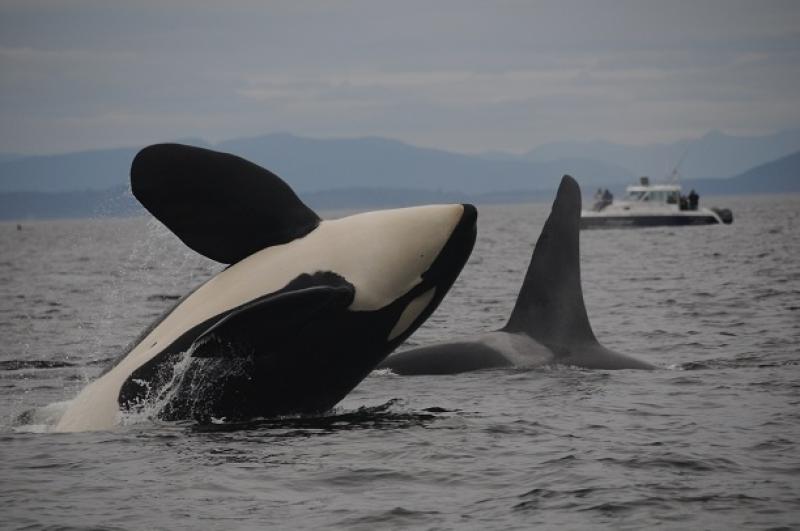 A new genetic analysis of Southern Resident killer whales found that two male whales fathered more than half of the calves born since 1990 that scientists have samples from, a sign of inbreeding in the small killer whale population that frequents Washington’s Salish Sea and Puget Sound.

Only about 26 of the 76 endangered whales in the Southern Resident population are currently breeding, according to the analysis published this week in Animal Conservation. The limited number of breeding whales reduces the effective size of the population, leaving it less resilient to change and possibly compromising the survival of individual animals, said lead author Michael Ford, a conservation biologist at NOAA Fisheries Northwest Fisheries Science Center in Seattle.

“The effective size of this population is really small,” he said. “It’s acting like a population of only 20-30 individuals.”

Authors of the research also include scientists from the North Gulf Oceanic Society and Center for Whale Research. While the new paper builds on earlier genetic studies, it also raises new questions about whether inbreeding may be contributing to the population’s struggles. Southern Resident numbers have fallen to their lowest point in 30 years.

The analysis identified four whales as highly inbred, including offspring of a father-daughter and mother-son pair, but noted that all four are still alive. Many additional whales may be inbred to a lesser degree. Other studies have estimated that more than half of Southern Resident calves die before or shortly after birth, and the new analysis suggests that inbreeding could be a contributing factor.

“We found a hint of a relationship showing that the less diverse you are, the less likely you are to live long,” Ford said. “We don’t yet know how much of a concern that is, but it’s something we want to look at more carefully. It’s possible that some of the problems this population has may be due to inbreeding.”

Many wild species maintain diversity through mixing that occurs when maturing animals strike out on their own, often joining or forming new family groups. Southern Residents do not follow that strategy, with whales staying with their mothers and their families throughout their lives. The reason is not clear; the whales may see more benefit to sticking with their families because their mothers continue to help them hunt salmon as food.

The drawback is that it puts the population at greater risk of inbreeding.

While killer whales are generally flourishing worldwide, the isolated population of Southern Residents that eat primarily salmon is not. NOAA Fisheries has designated the population one of its eight national “ Species in the Spotlight,” and developed an Action Plan of stepped-up measures to promote its recovery. The population faces three main risks: lack of salmon prey, vessel traffic and noise, and chemical contaminants. The Action Plan includes measures to address all three risks in both the short and longer term.

Researchers obtained DNA from skin and fecal samples for the genetic analysis, which identified two male whales, known as J1 and L41, as the fathers of more than half of the other sampled whales born since 1990. J1 fathered 16 of the Southern Residents with nine different females, while L41 fathered 20 whales with 11 different females. The two whales’ offspring included whales in all three of the Southern Resident pods, indicating that there is genetic interchange between pods but that males also mate with females in their own pod.

The number of breeding whales in the population has ranged from 12 to 53 over the past 40 years, the analysis found, with the oldest samples coming from a pre-1970 population with just 24 breeding whales. The analysis also found that the breeding success of male killer whales increases with age, with a median age of fatherhood at 31.

With the Southern Resident population dominated by females that lead the tight-knit family groups, “it’s kind of interesting to get a glimpse of what’s going on with the dads here,” Ford said.