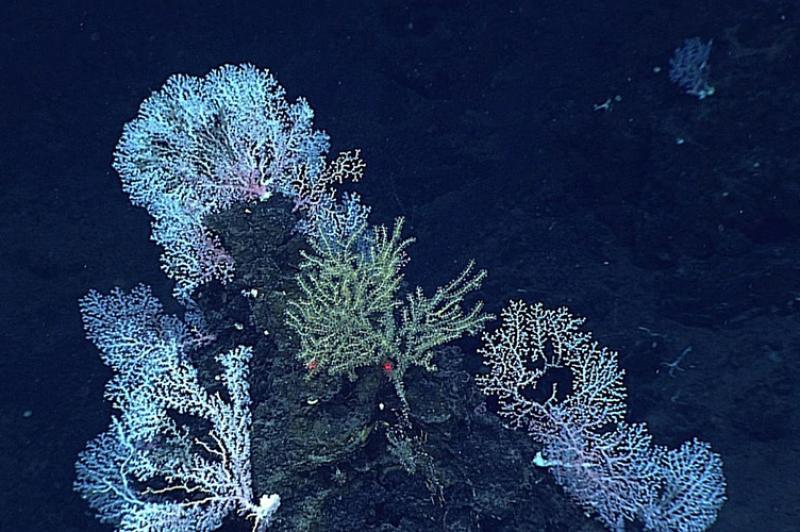 A dense community of deep-water coral on a 143-year-old lava flow located at South Point, Hawai‘i in 2015. Image courtesy of the NOAA Office of Ocean Exploration and Research.

Deep-water coral communities are some of the most diverse and productive environments in the deep ocean. They provide habitat for an array of organisms including some not yet known to science. Some corals are known to live far more than 2,000 years, but grow very slowly—less than a millimeter each year. This makes them very difficult to study within a human lifetime.

To understand how deep-water coral communities develop over time, researchers surveyed the community of deep-water corals growing on the lava flows of the island of Hawai‘i. Since we know when the flows occurred, they essentially act as “portals in time.” They allow us to view coral communities over a range of ages in the same environment. Hawai‘i is probably the only place in the world where such a study could be performed due to its continuous and well-known volcanology.

On the leeward coast of Hawai‘i, researchers deployed the submersible Pisces V and the remotely operated vehicle Deep Discoverer. They surveyed six lava flows and an older coral community growing on fossil carbonate nearby. Within a 60-mile area, each site was a different age: from 61 to 15,000 years old! 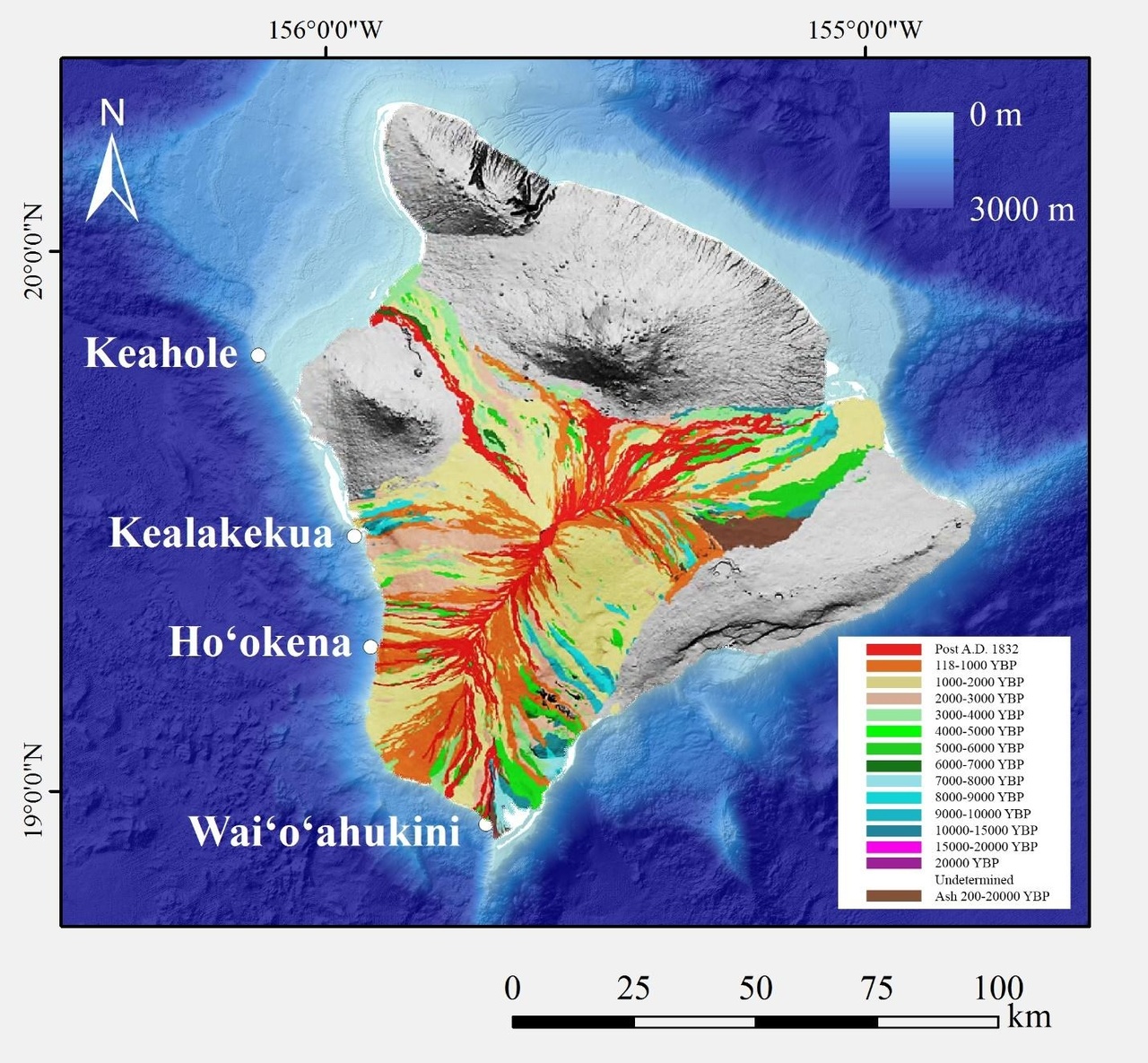 Boundaries of Mauna Loa lava flows on the island of Hawaiʻi with age (YBP, years before present) shown in color. Colors range from oldest in purple to most recent in red. Labeled place names indicate the general location of the four deep-water coral survey sites. 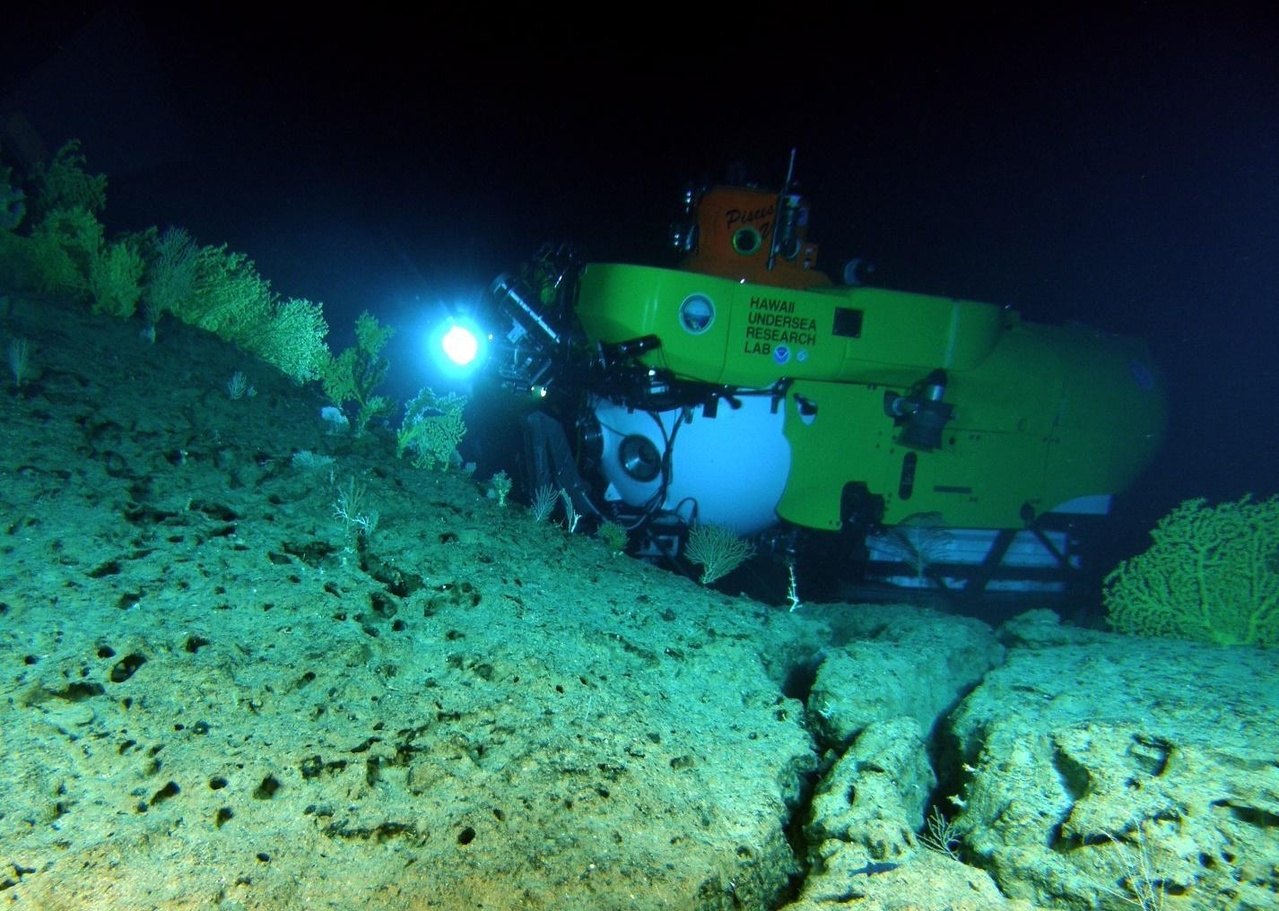 Pisces V surveying the dense deep-water coral beds at Keahole Point, Hawai‘i. Some of these gold corals, Kulamanamana haumeaae, are estimated to be over 2,000 years old. Image courtesy of the University of Hawai‘i Underwater Research Laboratory.

Comparing deep-water coral communities growing on these substrates of vastly different ages revealed a pattern of ecological succession extending over centuries to millennia. The communities changed in structure and diversity over time. The relatively fast-growing red coral (Coralliidae), which reaches maturity within 60–100 years, colonized new lava flows first, dominating the community. With enough time, the community shifted toward a more diverse array of tall, slower-growing corals including bamboo coral (Isididae) and black coral (Antipatharia). The last to colonize was gold coral (Kulamanamana haumeaae). Parasitic in nature, gold coral overgrows mature bamboo corals. It is also the slowest-growing coral within the community, growing thicker each year by just 0.04 mm—less than the width of a human hair. 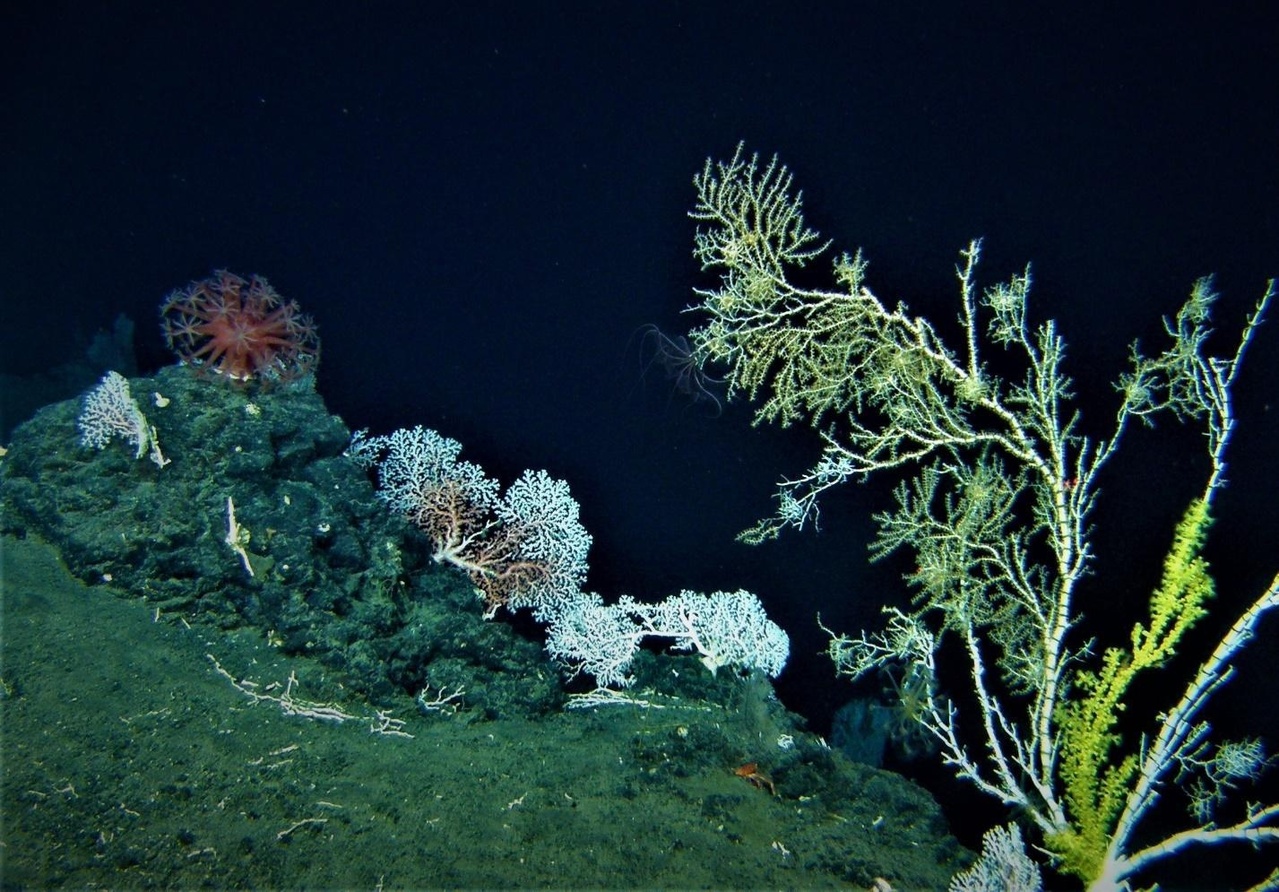 This is the first study to examine the growth rate of deep-sea coral communities over a period of more than 100 years. Our research suggests that a Coralliidae community in Hawai‘i can develop within about 150 years. The larger, slower-growing communities of gold coral could take thousands of years. These findings have important implications for the conservation and management of deep-sea ecosystems.

Watch a video from this research by videographers aboard the NOAA Ship Okeanos Explorer. In it, authors Meagan Putts, Frank Parrish, and Sam Kahng speak about how the field work for this research was accomplished.

This work was funded in part by the NOAA Deep-Sea Coral Research and Technology Program, the University of Hawaii School of Ocean Earth Science and Technology, and Hawaii Pacific University.

Hydrothermal-vent chimney. In the center of the photo, you can see the vent fluid, which appears as dark smoke due to its high levels of minerals and sulfides. Look closely, and you will also see the chimney is crawling with Chorocaris shrimp and Austinograea wiliamsi crabs. Image courtesy of the NOAA Office of Ocean Exploration and Research, 2016 Deepwater Exploration of the Marianas.
Feature Story

Last updated by Pacific Islands Fisheries Science Center on May 06, 2020