Learning More About a Big Fish: Atlantic Halibut Team Goes “Under the Hood”

Is one of the largest fish in the Gulf of Maine showing signs of recovery? Cape Cod fishermen and researchers at the Northeast Fisheries Science Center want to know. 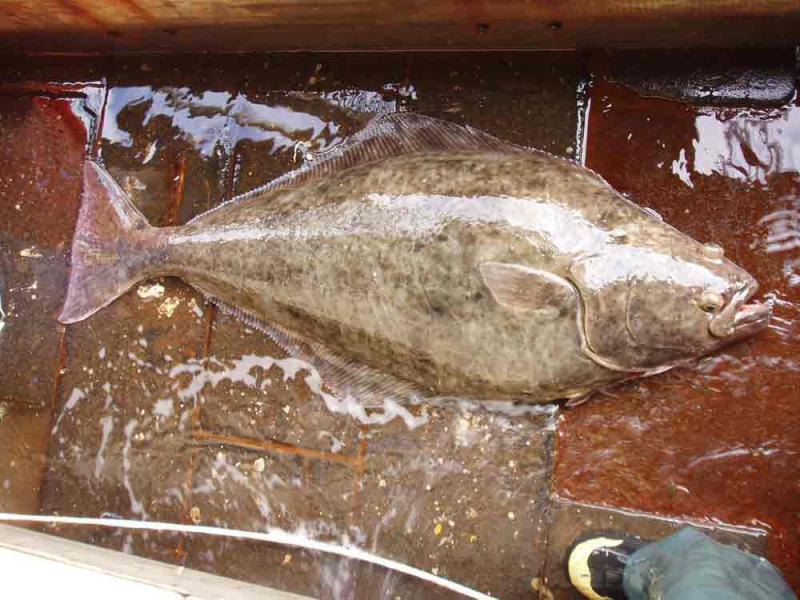 For nearly three centuries Atlantic halibut off New England and Atlantic Canada were taken for food and sometimes discarded as a nuisance. Their fate depended on the market and just how numerous they were. It proved to be a cyclical fishery. Several years of massive landings and discards were followed by many years of fallow seas before the fish would reappear in substantial numbers.

As these cycles played out, the fish also got smaller. By the late 19th century, the 6- to 7-foot specimens routinely encountered in the early days became the stuff of legend. Today the stock is a remnant of its former numbers.

In U.S. waters, a fishery focused on halibut is a thing of the past, but small catches are allowed in  commercial and recreational fisheries from Maine to Connecticut. Canada has a commercial fishery for Atlantic halibut that fishes on the southern Grand Banks and Scotian Shelf. It extends to Canadian waters on the northern edge of Georges Bank and in the Gulf of Maine.

In recent years, fishermen have seen more halibut. Researchers have started to look more closely at the life history, age, growth and reproduction of these fish. They’re looking for signs that rebuilding efforts are having an effect.

The study is focused on three questions: When and where do halibut spawn? Is there one overall population in the region, or are there several populations?  And when do they mature? These are key questions for stock assessment scientists.

Not Enough Samples for a Study

“We would catch maybe 6 to 12 halibut a year in our scientific surveys during the last decade,” said Rich McBride, head of the Northeast Fisheries Science Center’s Population Biology Branch, who is part of the study. “That was not nearly enough for a study about the animal’s life history. We needed more samples than what we were catching.”

It took two years and special permission from the New England Fishery Management Council, but researchers now have enough samples from U.S. fish to learn more. The council agreed to let study participants take up to six halibut per trip, exceeding the current trip limit of one.

The study needed 450 to 500 more samples from about 250 fish. Alliance members hit that target this year. They have provided about half the samples available for the study. 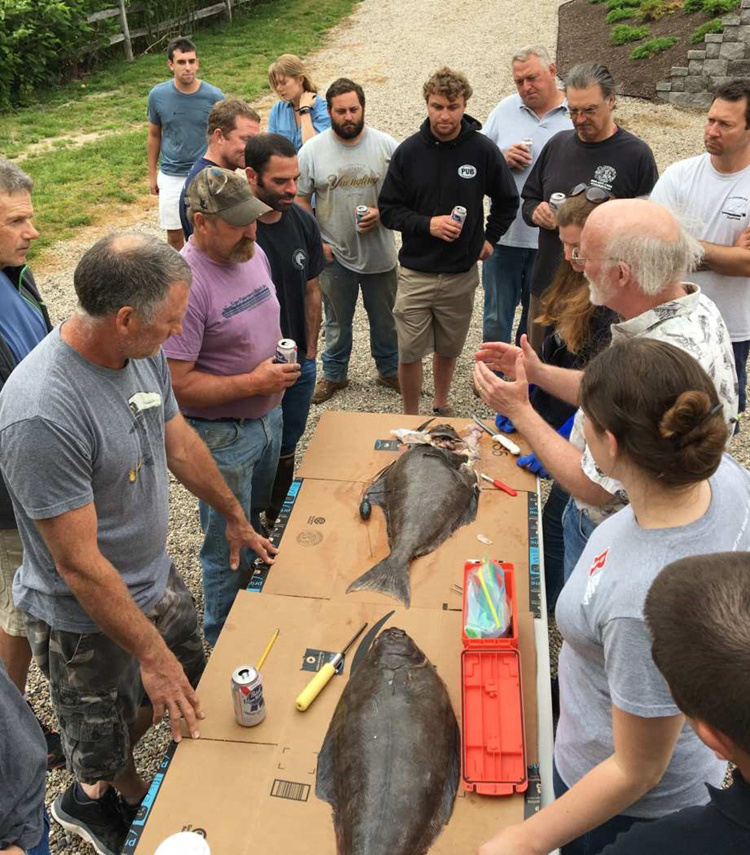 Collaboration between fishermen and scientists included a discussion about collecting biological data from halibut and how to record the information for the study. They also practiced tagging a fresh halibut. Credit: Chris McGuire

The Cape Cod Fishermen’s Alliance in Chatham, Massachusetts worked with researchers to provide training. They taught fishermen how to collect biological data from halibut needed for the study.

Fishermen learned how to gather the most important samples for a basic biology study: heart, spleen, gonad (reproductive organ), earbones (for aging), and a fin clip. They also got familiar with the data sheet they would use to record fishing location, the time, and the length and weight of the fish. Researchers could then match that information back to the sample. 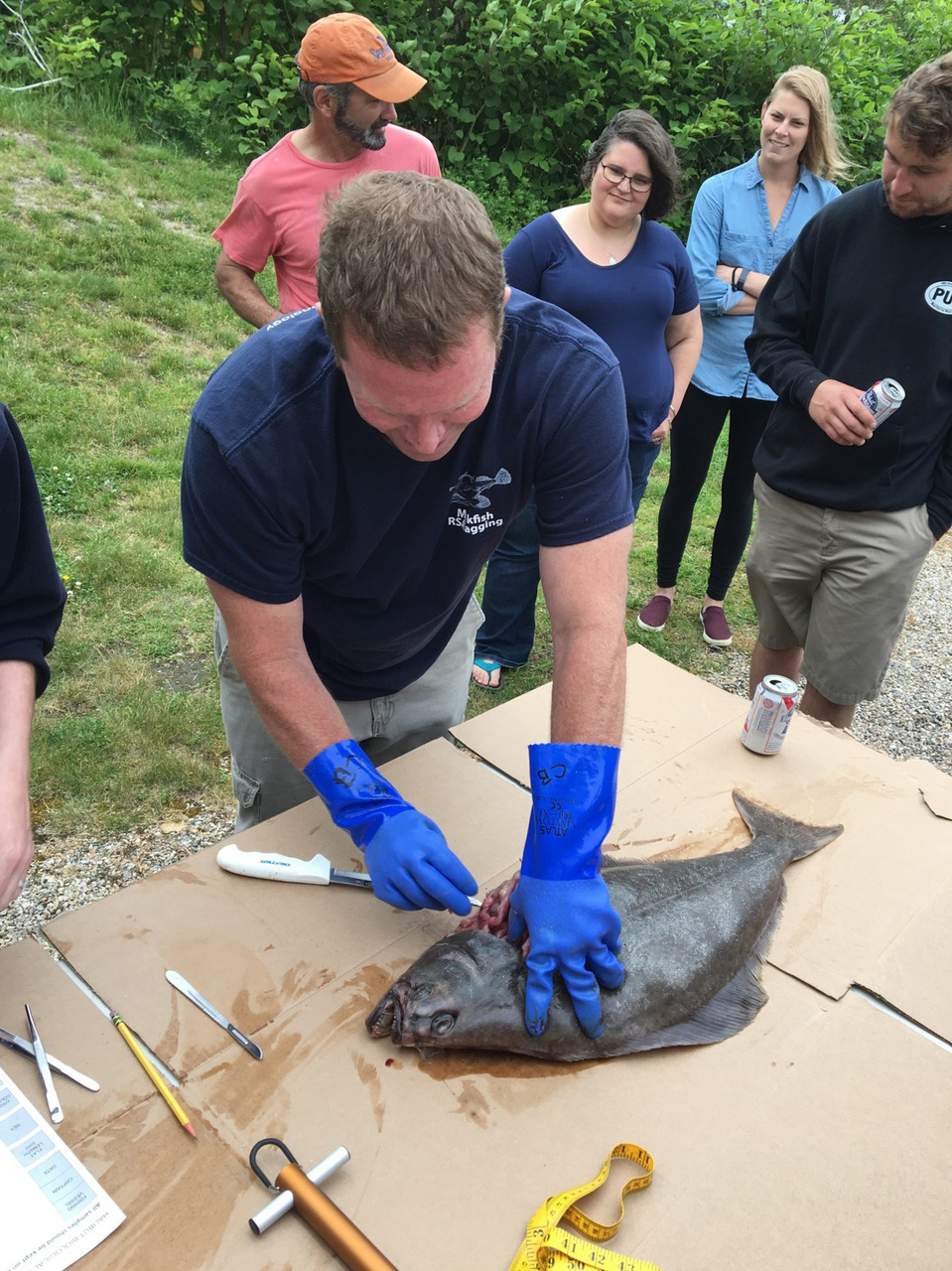 A fisherman practices sampling a halibut at the training session. Credit:  Chris McGuire

“When fishermen caught halibut in the course of a fishing trip, they would collect the samples,” explained George Maynard, research and policy coordinator for the Alliance. “Back on shore, I would collect the samples from the fishermen and bring them back to the lab for preservation and archiving. The tissue samples were all preserved and shipped to our collaborators in Canada for genetic analysis.”

Looking “Under the Hood” of a Halibut Egg

Maynard prepared gonad samples and brought them to McBride for processing. McBride, Maynard, and Emilee Tholke, another fisheries biologist, are studying cross-sections. They want to get an idea of each halibut’s maturity status. 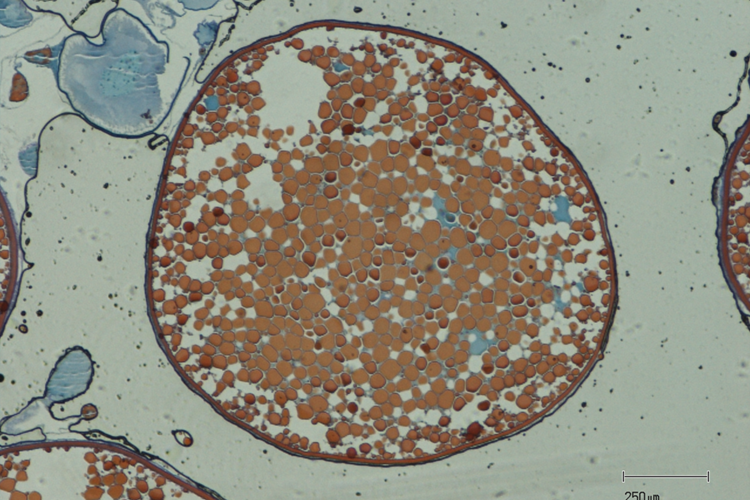 An egg from a halibut sampled during this study.  The egg is beginning to form a yolk (orange dots). Eggs in earlier stages of development (blue shapes) can be seen at left. Credit: George Maynard

“To get at those answers, we’re looking at developing eggs ‘under the hood,’ at the cellular level,” said McBride. “Having some sense of their current life history would be helpful as we move forward.”

“The next steps will be to combine these data with the length/weight and time of capture data from the fishermen, and aging data from the Massachusetts Division of Marine Fisheries,” said Maynard. “That will allow us to build a clearer picture of the size and age at which halibut reach maturity, and what time of year they spawn.”

The three-part study is funded by a Saltonstall-Kennedy grant developed by Chris McGuire at The Nature Conservancy. The other two parts include a stock structure study using genetic samples led by the Bedford Institute of Oceanography in Halifax, Nova Scotia. The University of Massachusetts-Dartmouth’s School for Marine Science and Technology is leading a satellite-tagging effort to understand halibut habitat use and distribution. 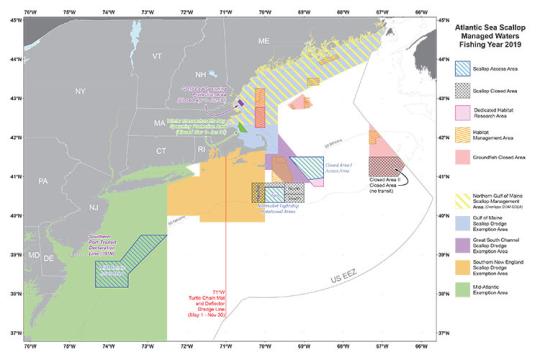