International team of scientists searches for answers to the fundamental mystery of Pacific salmon. 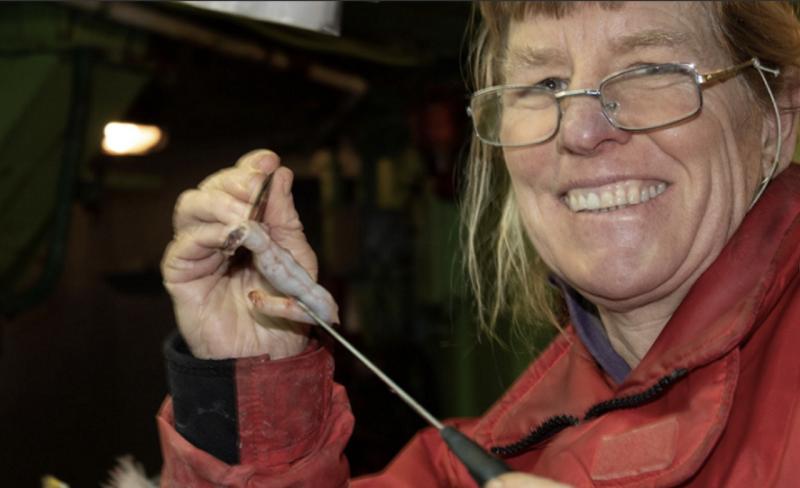 On February 16, an international team of biologists left Vancouver, British Columbia, heading for the North Pacific Ocean. They went searching for answers to the fundamental mystery of Pacific salmon: What determines whether they live or die? Laurie Weitkamp, a fisheries biologist with NOAA Fisheries Northwest Fisheries Science Center serves as the chief U.S. scientist for the trip. Here she shares some of her observations from her first few weeks at sea.

When we first boarded the Professor Kaganovskiy, we had no idea what to expect. Would we count the days and hours until we could get off, or would we enjoy Russian ship life and find the idiosyncrasies charming? Overall, the experience has been very positive and the Professor Kaganovskiy has become our comfortable home away from home. Life on a Russian research ship is certainly different than most of us are used to, but in a good way — and our experiences during this cruise will stay in our memories for decades to come.

Hoping for the Best

Now that we’ve been on the ship for over two weeks, I’m happy to report that the ship is clean, the food is good, and the crew are friendly and helpful. However, there many aspects of life on the Professor Kaganovskiy that are uniquely Russian.

Once we’d loaded all the gear on board and the ship pulled away from the dock, we quickly realized we were now on “ship time,” which is different than the Pacific Daylight time we’d just left on shore. For reasons that aren’t clear to me, the ship keeps its clocks and calendars on Vladivostok time, its home port. This means that the ship is two hours behind but a day ahead of Vancouver time, since Vladivostok (like all of Asia) is on the opposite side of the date line. Meals are scheduled by ship time, so breakfast is more of a brunch, and lunch and dinner are fashionably late.

The Importance of a Good Meal

Speaking of meals, these are always a big deal on any research cruise, because they break the monotony and there is always considerable anticipation about what will be served. Like most ships I’ve been on, meals on the Professor Kaganovskiy are on a fixed schedule. What is unusual on this ship is tea time, which occurs at 3:30 pm every afternoon. This is easily our most variable meal — we’ve been served white cake, a wheat-based sweet polenta, fried eggs, eggs and sausage, a ricotta-like cheese with dried plums, and a sweet oatmeal porridge. The most interesting tea item was a rainbow-colored herring pie with layers of potato, pickled herring, cooked beets, grated carrots, mayo, and something that looked like grated cheese (but wasn’t) on top. Many of us took big forkfuls expecting a sweet cake, and were surprised by the fishy herring taste!

All the Comforts of Home

One of the biggest differences between the Professor Kaganovskiy and North American research ships is how homey and lived-in this ship feels. For example, all the windows have lace curtains, there are living plants (and a few plastic ones) around the ship, and there is even a cat who has lived his entire life on the ship in the hydro lab. Like a house that’s had the same occupants for decades, however, there is clutter in all work spaces that is unheard of on North American ships. It seems like every drawer, cabinet, and counter space in every lab is full of stuff, some in use, the rest presumably left by past generations of researchers. For those of us used to ship labs with dozens of empty drawers and cabinets to hold our gear during a cruise, the contrast is huge.

There is also an interesting mix of equipment for science and for living, such as hot-water kettles and tea- and coffee-making supplies in every lab and on the bridge. The back room of our fish lab has two electric frying pans, various cooking utensils, and three cases of pasteurized milk, in addition to totes of scientific supplies, boots and rain gear, and a stock of drinking water.

Not all Fun and Games

Of course, the reason we’re all here is to do science, and I’m happy to report that already, only one-third of the way through our expedition, it is clear that this cruise will be a success.

We left Vancouver on February 16 with 21 scientists from Canada, the United States, Russia, Japan, and Korea on board. Traveling to the survey area took two and a half days. We reached the expedition survey grid in rather foul weather, with 3-5 m seas and a brisk wind; however, sea surface temperatures above 8°C were warmer-than-average. We all waited with anticipation and excitement as the first set completed and the cod end came on deck. The dominant opinion by most on board was that the waters were simply too warm, and that there would be no salmon. However, a coho and a pink salmon were caught in that first set, along with a mixture of squid, jellyfish, and lanternfish.

Our transect to date has taken us across the southernmost border of the survey grid and up the western side into the U.S. EEZ. The waters have cooled and the catch has changed over this period of time. So far we have completed 20 sets and have caught just over 130 salmon, in addition to a mixture of seven squid species, lanternfish, and many species of jellyfish.

Chum salmon and, surprisingly, coho have been the dominant species in our catch so far. Coho are generally considered coastal, so we had expected them to be only a minor part of the catch. We are now all waiting with considerable anticipation for the results of the DNA analysis that has been conducted on board. Are they Alaskan, Canadian, or southern-U.S. fish? We will have to wait about another 12 hours to know, but it has resulted in a small wager on board among the science teams.

Another surprise in catch has been pink salmon. Because there are more pink than any other salmon species across the Pacific, many of us thought they would dominate our catches. Several of the team also thought we would only find them in the cooler-water regions of the study area. However, so far, the 16 pink salmon caught were all in the first four sets — and in the warmest waters of the survey area.

This expedition is far from over. Whether these trends will continue as we progress is still to be determined. Additionally, examining the distribution of salmon in relation to the ocean chemistry and plankton data that we are also collecting is going to be fun and exciting, and will provide even further insight into and information about the factors that may be regulating the distribution of these salmon species.